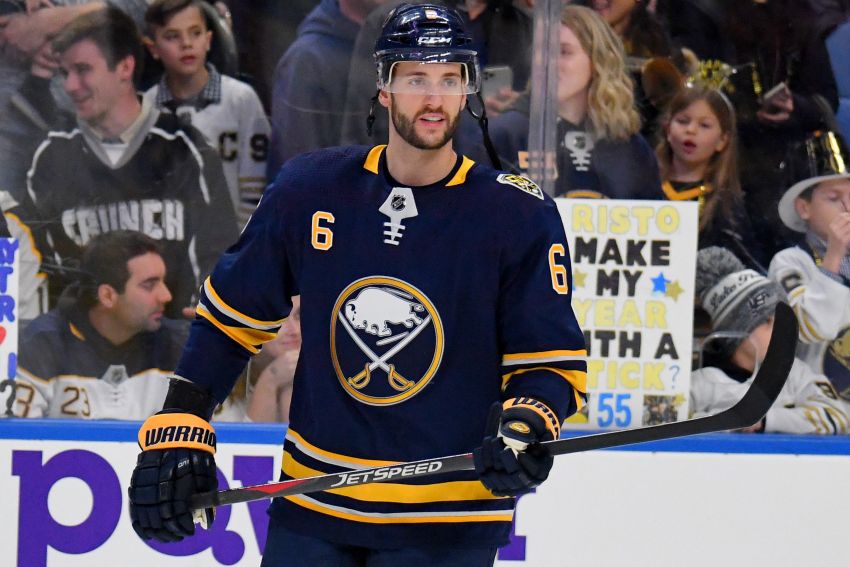 Marco Scandella spent two and a half seasons with the Sabres. ©2020, Micheline Veluvolu

BUFFALO – When the Sabres traded defenseman Marco Scandella to the Montreal Canadiens shortly before Thursday’s 3-2 overtime win against the Edmonton Oilers, it felt like another deal could be imminent.

The Sabres need help at forward. Why would they dish Scandella, 29, for or a fourth-round pick in 2020? They’re trying to win now, right?

Well, shortly after the Sabres announced the deal, they traded the pick they received from the Canadiens to the Calgary Flames for winger Michael Frolik.

The 6-foot-1, 190-pound Frolik, 31, has compiled five goals, 10 points and a minus-10 rating in 38 contests with the Flames this season. The Czech also won the Stanley Cup with the Chicago Blackhawks in 2013.

“We like his even-strength play,” Botterill said during the first intermission inside KeyBank Center. “We think he’s a very strong five-on-five player. He’s also a player that has championship pedigree. He’s been in the playoffs before, won a Stanley Cup.”

The Sabres began Thursday a plus team five-on-five, having scored 81 goals and allowed only 77. Their special teams, however, have been weak, especially during the four-game losing streak broke Thursday.

If they had even average special teams, they would likely be in a playoff spot instead of in fifth place in the Atlantic Division.

“Our special teams have to be better,” Botterill said. “We think Michael can come in and help us on our penalty kill. We see him as a winger who can play up and down our lineup and we’re certainly excited to have him.”

Botterill said the Sabres needed to trade Scandella, a Montreal native, and his $4 million salary cap hit to create space to acquire Frolik, who carries a $4.3 million cap hit.

Both players will be unrestricted free agents following the season.

Botterill said it will probably “be a couple days” before Frolik, who needs to have his visa worked out, joins the Sabres. They host the Florida Panthers on Saturday afternoon.

“It’d be a bit of a surprise if he’s here before Saturday,” he said. “I think more realistic would be next week.”

The Sabres and Canadiens, of course, rarely make trades. The Sabres trailed their Atlantic Division rival by one point when the deal was announced. The Sabres passed the Canadiens, who lost 2-1 to the Tampa Bay Lightning, hours later.

So why did Botterill trade him to Montreal?

Scandella slumped badly last season, morphing into a gaffe machine. But he rebounded nicely this season, compiling three goals, nine points and a plus-9 rating in 31 games.

“Marco’s played very well this year,” Botterill said. “I think he came into the organization, first year had a strong year. Last year, even under his own beliefs maybe (he) didn’t play up to his potential. But he’s done a very good job and I think that’s why there was more of a demand for him.

The Sabres acquired Scandella from the Minnesota Wild with winger Jason Pominville in June 2017 for wingers Tyler Ennis and Marcus Foligno.

Sabres captain Jack Eichel, who said he found out about the trade following the game, became close to Scandella.

“Spectacular human being, someone who brings a lot of energy to the rink every day,” he said.

The Sabres have had a surfeit of defensemen all season. Two have been sitting out some games. Sabres coach Ralph Krueger has also regularly dressed a seventh defender, including Thursday.

Botterill was expected to parlay one of those extra defensemen into a forward.

“We’ve been expecting something of this nature for a while,” Krueger said.

Frolik has scored 158 goals and 380 points in 831 career outings over 12 seasons. He’s in the final season of a five-year contract.

The Florida Panthers drafted Frolik sixth overall in 2006. He scored a career-high 21 goals in each of his first two seasons. He has also played for the Winnipeg Jets.

Having coached against Frolik in international competitions, Krueger said he knows Frolik well.

“He brings a mentorship in a character kind of role that will help us to continue to solidify our game,” he said. “We’re really excited to get him here.”

2 thoughts on “To acquire Michael Frolik from Flames, Sabres had to trade Marco Scandella”