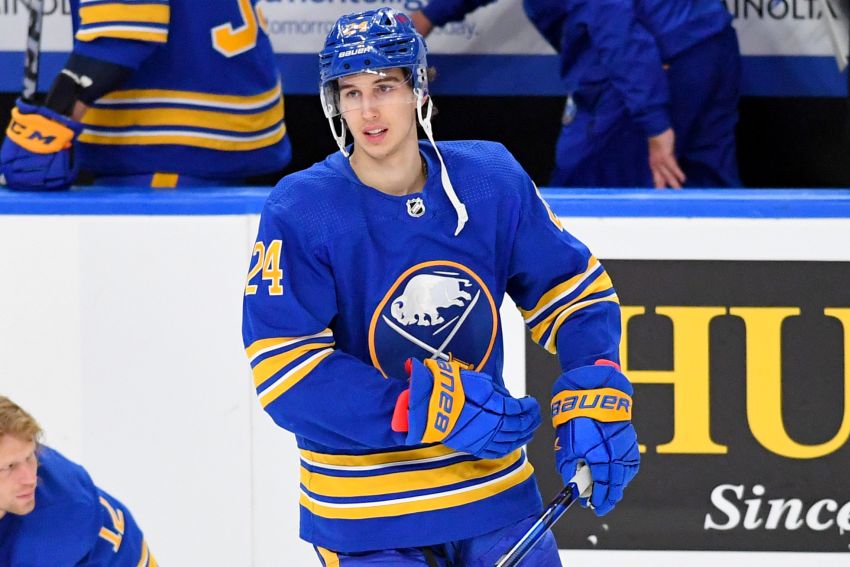 Sabres rookie Dylan Cozens started doing the math in his head. After testing positive for COVID-19 earlier this month, he was forced to quarantine for the third time in less than three months.

“I was just adding up the days,” Cozens said on a Zoom call this afternoon from Washington. “Since Nov. 25, I’ve quarantined for 35 days or something, just in a hotel room. So it’s been a lot, for sure.”

Cozens, 20, also quarantined for two weeks during Team Canada’s World Junior Championship camp in Red Deer, Alberta, and again for a few days after taking a private plane from Edmonton to Buffalo when the tournament ended.

“It’s just something I’ve learned to deal with,” the winger said after the Sabres prepared for tonight’s road game against the Capitals at Capital One Arena.

The Sabres, of course, have been dealing with COVID-19 all month. A week ago, they had nine players on the NHL’s protocol-related absences list. On Wednesday, forward Casey Mittelstadt was the final player removed.

Everyone is back with the Sabres except workhorse defenseman Rasmus Ristolainen, who was taken off the list Tuesday. The Finn did not accompany the team on its four-game road trip.

“With Risto, we’re going to take our time,” said coach Ralph Krueger, who returned to the Sabres on Sunday after testing positive for COVID-19 on Feb. 4. “You can see the writing on the wall, that he needs more space to get his energy level up. Every one of us that had COVID has a different pathway back. His will still take some time. I really don’t expect him to join us on this trip. … We aren’t going to rush anybody back in.”

Update: The Sabres recalled defenseman Will Borgen from the taxi squad late this afternoon and assigned Mittelstadt to the taxi squad.

Lazar, 26, said he experienced “symptoms for about four days that stemmed from fatigue, congestion, a loss of taste and smell.”

“I was able to get over it pretty seamlessly,” he said.

Cozens said he was “pretty much asymptomatic.” Mittelstadt, meanwhile, said he “didn’t have too many symptoms.”

“(A) stuffy nose for a couple of days but for the most part I felt good the whole time,” he said.

Players on the absences list can’t work out at home, so Mittelstadt said he felt bored.

“Not that I wanted to have symptoms but it stinks that I’m symptom-free and sitting at home with so much energy and can’t work out, can’t move and stuff like that, so that part was hard for me mentally,” he said.

“You realize this thing’s real, and it’s no joke,” he said. “Us guys that had it, kind of talking about our symptoms and what we’re going through, it’s really interesting the wide range of symptoms and how guys can be affected.

“In all honesty, I thought I was in the clear just from the time we were in quarantine to when I tested positive. I think there’s three, four, maybe even five days that went by until I tested positive. But that just shows how scary this thing can be. Huge props to the medical staff and everyone involved in allowing us to have the proper guidelines in place to be healthy in a timely fashion and get back to work.”

Borgen, 24, played his third straight game after sitting out the first 10. Before Monday, he hadn’t played a game at any level since March 11.

“We were really impressed with his entry,” Krueger said. “It’s a defenseman of his personality, if you look at his last three, four years, it’s exactly how you would hope it to play out where inch by inch, step by step, it develops the base that he needs to have to be able to play the game that will be his NHL game.

“We have truly been excited about what we’ve seen with Will from Day One in training camp through all the adversity of being on the taxi squad and waiting for opportunity and then after almost 10 months of not playing being able to play at that level, we’re excited. … We will definitely expect to see him more in the mix moving forward.”

The Sabres made one change on defense, inserting Montour, who tested positive for COVID-19 earlier this month, for Matt Irwin.