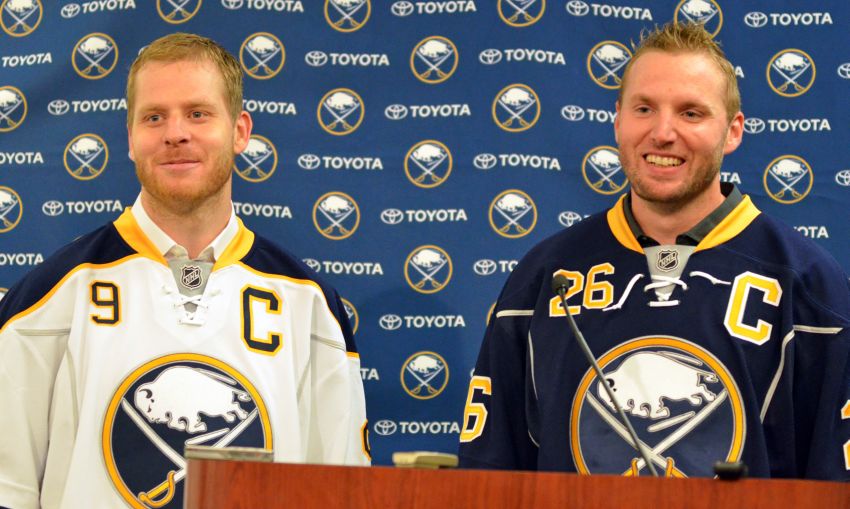 BUFFALO – Shortly before noon Tuesday, the Sabres quickly streamed off the First Niagara Center ice following practice and walked to their dressing room. The metal door closed after all the players had entered.

Inside, coach Ron Rolston began addressing his team’s captaincy, which had remained vacant since the Sabres traded Jason Pominville in April.

Cheers emanated from the room a few minutes later. More applause could be heard shortly after that.

Vanek will serve as captain at home. Ott has the honor on the road. Defenseman Christian Ehrhoff is the new permanent assistant captain. Winger Drew Stafford lost the ‘A’ he had worn for two years.

Why split the captaincy?

“We just thought both guys represented what we wanted; nothing more, nothing less than that,” said Rolston, whose rebuilding club opens the 2013-14 season tonight in Detroit against the Red Wings. “It’s all about the influence they have on the team. Those guys are big influences on the team.”

The homegrown Vanek, one of the Sabres’ top talents since 2005, quietly goes about his business on and off the ice.

“I’m not the most rah-rah guy, but I think when I got something to say, I’ve always said it, and that will continue,” said the 29-year-old, the NHL’s first Austrian captain.

Meanwhile, the loquacious Ott, whose Sabres tenure began in January, has quickly earned his keep here.

“He wears his heart on his sleeve and he plays for the crest every night,” Rolston said.

As one of the NHL’s top agitators, the 32-year-old Ott’s constantly toeing the line.

“Since I’ve started wearing an ‘A’ … I’ve tried to stay on the right line and lead and be an example for the team,” Ott said. “Obviously, I play a hard style to try to be competitive. For myself, this isn’t going to change anything, who I am. What’s gotten me in the NHL is my work ethic. That’s what’s going to keep me there, with a letter or without it.”

Ehrhoff added: “He’s one of those guys you hate to play against but you love to have on your team.”

Sabres goalie Ryan Miller said Ott “is pretty much in your face.”

“That’s one of the traits that kind of gets him despised on the ice by some guys,” Miller said. “If you play with him, you really like him for it. He’s a positive guy. He’s always talkative and trying to bring guys up. His joking, his pushing, it’s actually his competitive spirit. He wants to get better on the ice. … He’s going to try to get the best of you. He’s going to push, push, push and chirp, talk.”

“He’s hard on himself on the ice,” Miller said. “That translates into, ‘You want to be better.’ So have guys that expect a lot of themselves. Hopefully, that attitude’s something that’s contagious.”

Sharing the ‘C’ doesn’t bother either player. The Sabres split the captaincy once before, from 2005-07 with Daniel Briere and Chris Drury, one of the greatest stretches in franchise history.

As a rookie, Vanek watched how Drury and Mike Grier, another popular veteran, carried themselves and interacted with others. Vanek wanted to emulate them.

“That’s the example I’ve been trying to set for years,” Vanek said.

Ott has drawn heavily from Brenden Morrow, his last captain in Dallas.

“What he brought on the ice – extreme work ethic, grit, hard to play against and scoring – but he did it silently and he did it great,” Ott said.

Rolston selected two players whose contracts expire following the season, something he’s not worried about. He consulted with his staff and the organization – “It’s not something that’s done in a vacuum,” he said – before reaching his decision.

“We wanted the best influence on our young players,” Rolston said. “Thomas has been a big influence on this organization for a long time. He knows how it ticks.”

Ultimately, Vanek, who noted how much he likes living in Buffalo, said the captaincy won’t influence if he re-signs with the Sabres.

Notes: Vanek joking about if his honor means a lot to Austrians: “I don’t know. I hope the news will make it there by next week.” …  Rolston on why Vanek’s the home captain and Ott’s the road one: “No rhyme nor reason.” The players will wear an ‘A’ when they’re not captain. … Sabres winger Marcus Foligno (muscle strain) didn’t practice Tuesday but could return this weekend, Rolston said. Foligno has been skating by himself. … Sabres defenseman Tyler Myers said he “didn’t see enough reason to vote no for the league’s new hybrid icing rule.” Instead of chasing down the puck, players will now race to an imaginary line in the faceoff dots. Linesmen must make a judgment call. … Don’t forget, the Red Wings, who just switched to the Eastern Conference, are one of the Sabres’ new Atlantic Division rivals.