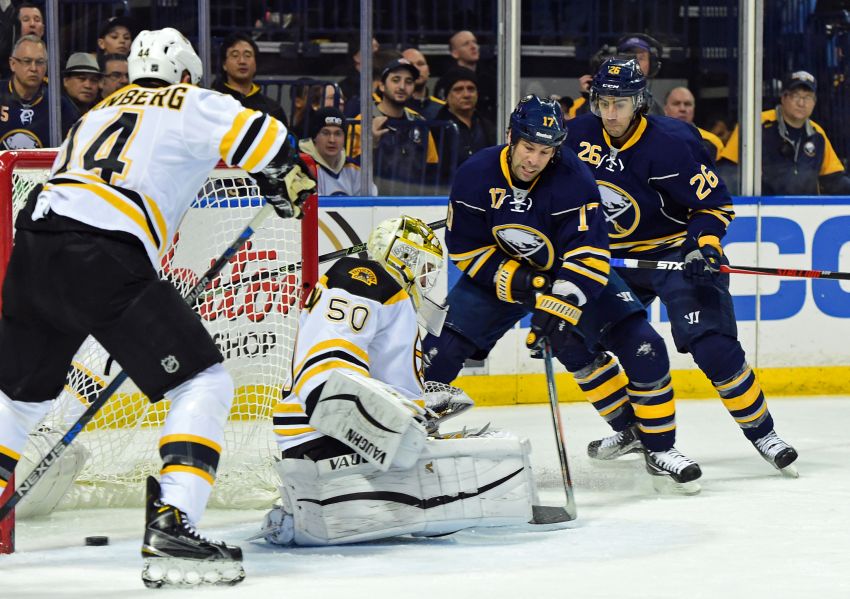 In No. 1 goalie Robin Lehner’s return after missing more than three months with a high ankle sprain, the Sabres lost for the for the seventh time in nine games and dropped their 16th home contest (8-14-2).

Graying veteran David Legwand’s third goal this season and first in 20 games opened the scoring in the first period. But the Sabres missed some golden opportunities to seize the game early in the second period, blowing three straight power plays after Matt Beleskey tied it 1:01 into the period.

Zdeno Chara’s wrist shot past a screened Lehner 29 seconds into the third period held up as the winner.

“We didn’t play a bad game, but we didn’t play a good game, either,” Sabres captain Brian Gionta said. “We got to look at ourselves and figure out what it is. We didn’t do enough to win.”

The Sabres, who host the NHL-leading Washington Capitals tonight, are 9-9-2 on the road but have the most home losses in the league.

To make matters worse, the Sabres lost winger Zemgus Girgensons to an upper-body injury in the first period. The Latvian will likely miss tonight’s contest, Sabres coach Dan Bylsma said. The Sabres plan to recall a forward from the Rochester Americans.

Girgensons was injured when he hit Kevan Miller. Bylsma said the Sabres might have an update today.

The Sabres have scored just one goal or been shut out in 14 of their 44 games this season. Their ninth-ranked power play has buoyed them at times, but the units didn’t do much Friday before the 18,704 fans.

“We got to take advantage of those,” Gionta said. “It’s part of the game. It makes or breaks games.”

He added: “They kept it tight. They blocked a lot. They kind of kept us to the outside. Anything that did get through was back on the outside.”

The Bruins sealed just their third win in 11 games with goals from Ryan Spooner and Brett Connolly (empty net).

If the Sabres are looking for a silver lining, Lehner performed strongly and played a 60-minute NHL game for the first time since Feb. 14, 2015, two days before he suffered a season-ending concussion.

“It tough to lose, but I think there was a lot of positives in the game, too, for me, personally,” Lehner said. “I felt like I was pretty calmed and controlled out there and played the puck most of the night pretty well.”

The Swede’s right ankle, which he injured 28 minutes into his Sabres debut opening night, Oct. 8, held up fine during his 27-save performance.

“I felt like my foot could hold 60 minutes,” said Lehner, who was acquired from Ottawa for a first-round pick June 26. “I felt like I’m getting better every day now.”

Bylsma added: “I thought he looked real good and real (in) control through the first period.”

2 thoughts on “Third period dooms Sabres in loss to Bruins”