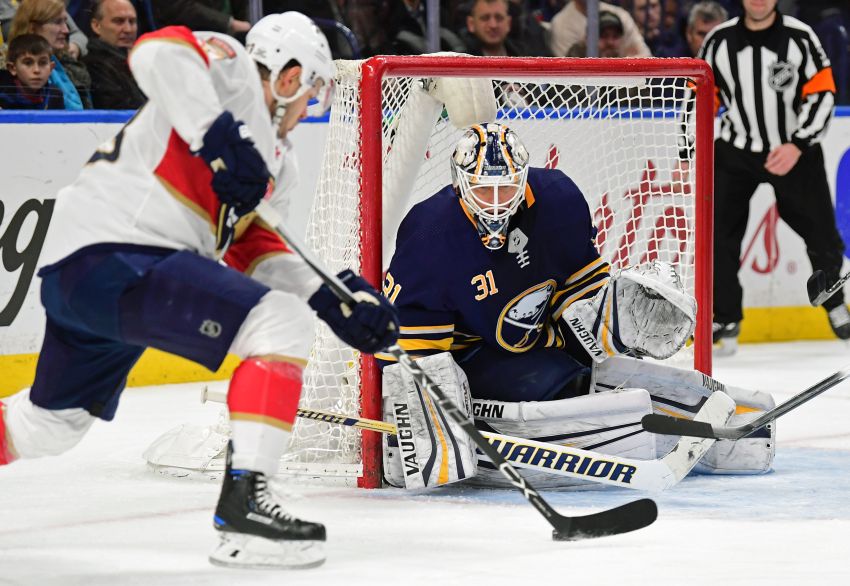 BUFFALO – The emotion buoyed them, put the Florida Panthers back on their heels. Winger Evander Kane said the Sabres started possessing an “F-you attitude.”

Scrums and fights erupted late Thursday during a heated Atlantic Division tilt inside KeyBank Center. The Sabres even went after a head.

Of course, this all transpired after the Sabres allowed three straight goals and ended the first period trailing 3-1.

“We played with more emotion in the second period,” coach Phil Housley said following the Sabres’ 4-2 loss. “That’s the way we need to start the game.”

More on the wretched start later.

The melees became so intense some Sabres could be suspended today.

Center Johan Larsson earned a cross-checking major and a 10-minute match penalty for hitting Vincent Trocheck in the side of the jaw. An automatic one-game suspension accompanies a match penalty, although it’s subject to review by the NHL, meaning it could be thrown out.

“I just heard something going on, so I skated up there,” Larsson said. “The guy came right at me, I pushed him a little bit and got a little scrum.”

Larsson said he’s “not worried at all” about a suspension.

Kane, meanwhile, received a five-minute interference major and a 10-minute misconduct for running over Aleksander Barkov with 2:01 left.

“I was gliding in and I didn’t really even see him,” Kane said. “I kind of got tripped up and fell down and didn’t really know what was going on. They came over and started the scrum.”

Panthers defenseman Keith Yandle said the late fracas “mostly came from Kane kind of running around and being stupid.”

“He’s not going after (Michael) Haley (a tough guy), he’s going after Barky (an NHL All-Star) and stuff,” Yandle said.

The two teams meet again in March 2 in Florida. Perhaps by then the Sabres will have earned their 1,000th home win in franchise history. They failed in their third try Thursday, falling to an awful 6-14-3 at home this season.

After Ryan O’Reilly’s power-play goal put the Sabres up 1-0 at 7:01, Yandle (two-man advantage) and Michael Matheson (five-on-four) scored. Denis Malgin made it 3-1 before the first period ended.

“We can’t start the game taking four penalties,” Housley said. “We score a power-play goal, everything was going in the right direction, we take a penalty. I understand we’re going to have to kill penalties, but we shoot a puck over the glass five-on-three and we lose a draw, now we’re chasing the game again.

“I think a lot of those penalties were due to we’re in the offensive zone, there’s a change of possession and we’re waiting again, and then we’re trying to catch guys from behind, and that’s something that we’ve gotten away from the last two games.

“But when did make a commitment to that area the second and third period, you could see there was a much bigger difference.”

“We definitely had enough chances after the first period,” Housley said. “I thought we had them on the ropes a couple times, and unfortunately we were missing the net, trying to be too fine.”

Kane added: “From the 20-minute mark of the second period we dominated them for the rest of the game.”

“The guy had a lot of time and was able to chip through my arm there,” Johnson said. “You want to make that save at that time of the game.”

Johnson, who earned his first win since Oct. 15 on Jan. 22, has only two victories this season, both of them on the road. He hadn’t started a home game since Nov. 22.