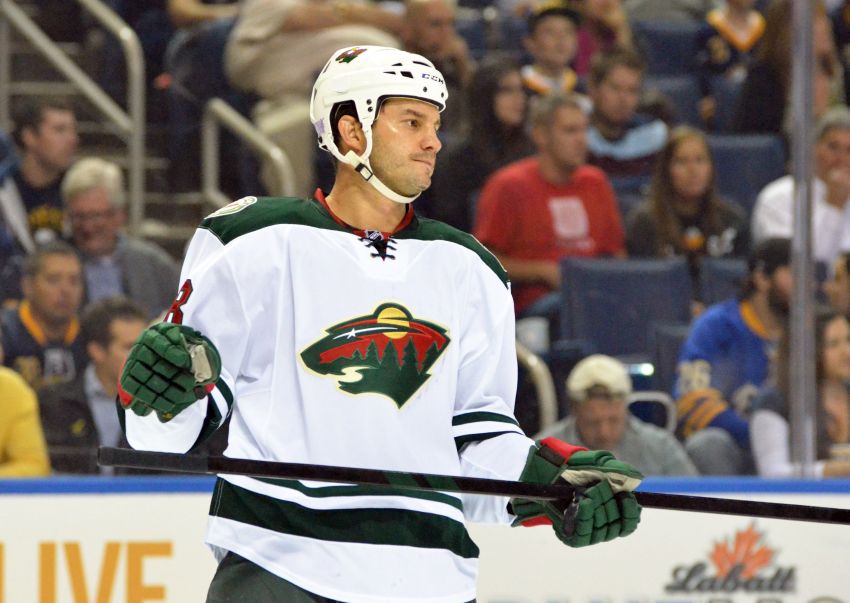 BUFFALO – Zenon Konopka is joining the Sabres for more than his grittiness and faceoff prowess. In the 33-year-old center, they also possess a hardworking veteran the youngsters on the rebuilding team can learn from.

“Those type of guys are really good role models for the younger players,” interim coach Ted Nolan said Friday shortly after the Sabres plucked Konopka off waivers from the Minnesota Wild. “They last that long because they have that special ingredient to work and compete.”

The reeling Sabres, who host the New Jersey Devils tonight inside the First Niagara Center, needed to add someone up front.

The Sabres had only 11 healthy forwards after winger Drew Stafford (upper body) left Thursday’s 4-1 loss in Minnesota. With recall options limited, the banged-up club made its second waiver claim in five weeks. The Sabres also grabbed Matt D’Agostini on Nov. 28.

Konopka, a native of nearby Niagara-on-the-Lake, Ont., is a rare mix of feistiness and skill, fighting regularly and annually ranking among the NHL’s faceoff leaders.

“My mom was born in Buffalo, my grandparents, when they were alive, were from there, my aunt and uncle,” Konopka, who has a pet rabbit named “Hoppy” and a wine business, told the Minneapolis Star Tribune. “The best call I made was to my aunt in the nursing home. She was telling everybody there, ‘My nephew is going to play for the Sabres.’”

“He someone who’s always got his teammate’s back,” he said. “He competes hard. He brings it every night no matter how many minutes he plays. He’s a great guy in the locker room and (I’m) excited to get him here.”

“If you look at our faceoff situation, too, we can certainly use a faceoff man,” Nolan said.

The undrafted Konopka, 6-feet and 213 pounds, has a $925,000 salary cap hit and $1 million salary this season. He’ll be an unrestricted free agent this summer.

The Wild said it waived Konopka so the team could recall a goalie Thursday, although it reportedly had several other options if it wanted to keep the tough guy.

Konopka has 108 NHL fights, according to hockeyfights.com, including seven this season. He had a league-high 33 scraps in 2009-10 with Tampa Bay. He has also played for Anaheim, Columbus and Ottawa.

Nolan, of course, loves having toughness in his lineup. Enforcer John Scott has been taking a regular shift under him. Forward Cody McCormick, who plays and fights regularly, is hurt (hand).

Exactly halfway through the 82-game season, the Sabres, who have an NHL-low 11 wins and 26 points, need another spark.

They imploded during their two-game road trip, losing 3-0 Tuesday in Winnipeg before Thursday’s awful effort.

The Sabres had been on a 4-1-1 run, their best stretch this trying campaign.

Nolan said injuries – the Sabres are down six players and five regulars, including Stafford, who’s out “a little while” – haven’t helped.

“On a team that’s rebuilding, that’s a young team, that’s a lot for any team to handle,” he said. “But besides that I was more disappointed with the way we worked or the lack of working and lack of sticking to what made us successful a little bit earlier.”

Nolan said the Sabres “have to play a certain style.”

“If we don’t, it shows,” he said. “The last couple games, if we start ad-libbing, if we start trying to do stuff that is out of our wheelhouse, we’re in trouble. We got to make sure we play a very simple, honest, north-south type of game.”

The good news is the Sabres play seven of the next nine games at the FNC, where they’ve won five of the last six (5-0-1).

“It’s been the fans,” Scott said about the strong home play. “They’ve been kind of rallying around us. I think they know the position we’re in and they know the team we have. I think they embrace that a little bit. Once we got on a little roll and have a few good shifts they get behind us and it kind of builds and build and builds.”