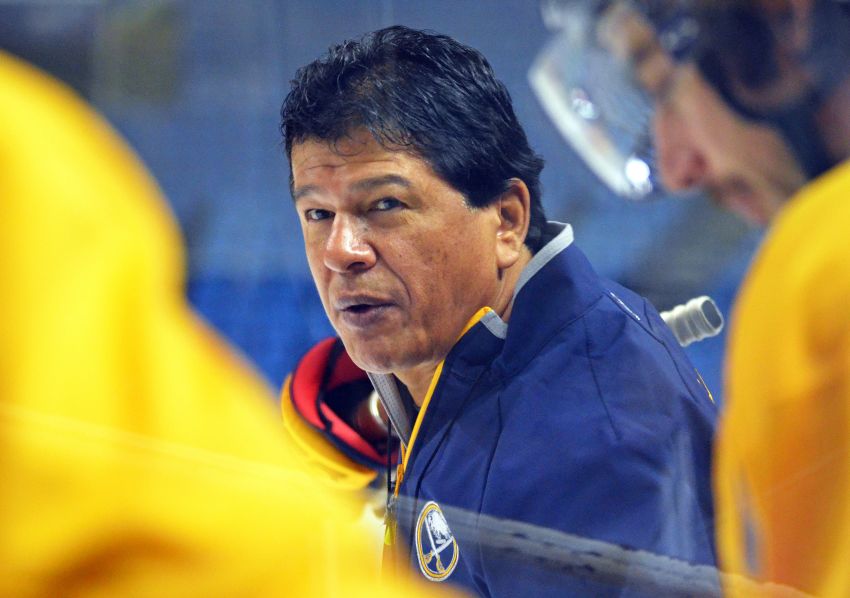 BUFFALO – It’s been a whirlwind 48 hours for Ted Nolan. Since taking over as the Sabres’ interim coach, the 55-year-old has been trying to learn everything about his new players and team.

Nolan said he hasn’t had time to be nervous for his highly anticipated debut tonight against the Toronto Maple Leafs inside the First Niagara Center.

Instead, he’s worrying about his players’ names.

“I’ve been so focused on what I have to do,” Nolan said this morning. “I even got the pictures of guys to put them in line combinations so I know who they are. I was more nervous on that, getting to know the guy’s name, more so than the than the game itself.

“Then you realize who we’re playing. You realize how emotional the game’s going to be, how intense it should be. So I haven’t had time to be nervous yet.”

At some point tonight, though, Nolan acknowledged he might feel some butterflies.

Nolan, and Pat LaFontaine, who brought back his old coach and friend in his first move as president of hockey operations, will almost certainly receive a thunderous ovation tonight.

With two of the franchise’s most popular figures back in town, tonight’s contest could be a memorable one.

“Very excited,” Sabres winger Tyler Ennis said. “It’s kind of a clean slate, starting fresh. Everyone knows the rivalry, obviously, with Toronto. So that adds to it as well. So it should be a fun one.”

In lineup news, Nolan said Ville Leino, a winger most of his Sabres career, will play center tonight. So will rookie Zemgus Girgensons, a winger his entire 19-game NHL career.

Nolan said he spoke to Leino about his childhood and the position he played well.

Nolan said the lines will be different than the ones he used Thursday. The Sabres didn’t do any line drills this morning.

Marcus Foligno, a center recently, will move back to the wing.

In injury news, defenseman Mike Weber (broken thumb) is out this weekend, Nolan said. The Sabres play in Toronto on Saturday.