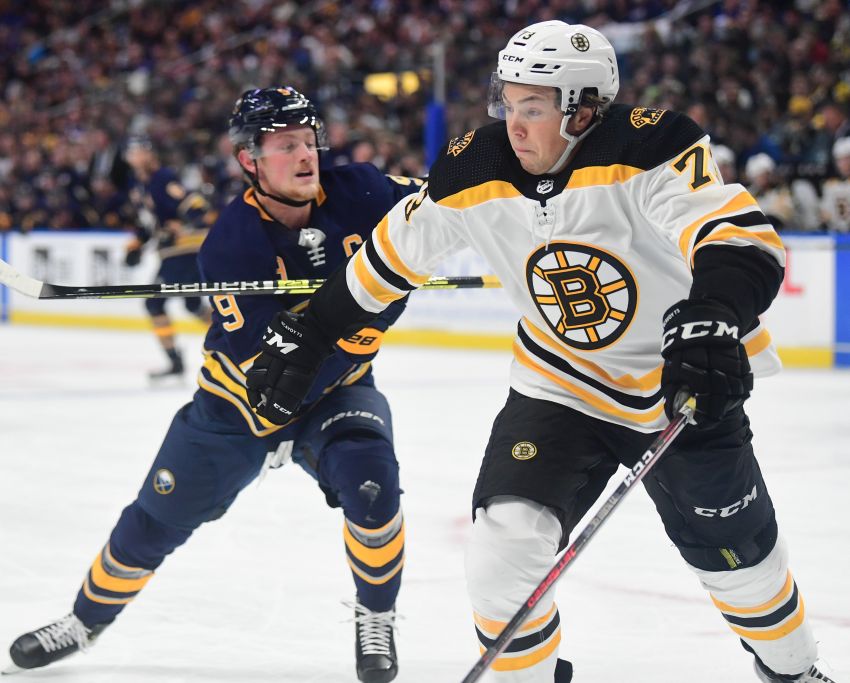 BUFFALO – The Sabres’ playoff hopes are usually long gone by now. Incredibly, they haven’t held a postseason spot on this date since 2009.

So dealing with the expectations that accompany their hot start – right now, they have 47 points and rank third in the Atlantic Division, three points ahead of tonight’s opponent, the Boston Bruins – could be a difficult experience for their young roster.

Only one player, winger Jason Pominville, has played a postseason game with the Sabres. Sixteen players have never appeared in an NHL playoff tilt.

Earlier this season, fresh off a disastrous campaign in which they finished dead last, some teams probably took the Sabres lightly. Not anymore.

Suddenly, teams are gunning for the Sabres, who haven’t made the playoffs since 2011.

“We’re in a good spot … but it’s only going to get harder, games are going to be tighter, opponents are going to be harder, they’re going to be more desperate as the season moves along here,” Pominville said Friday inside KeyBank Center. “We’ve earned the right to be where we’re at. …

But the Sabres haven’t showcased much consistency over the last month. They’ve cooled off and started showing signs of inexperience. Since their 10-game winning streak ended Nov. 29, they’re just 4-6-3.

So how do the Sabres embrace the challenge of becoming a playoff team? To coach Phil Housley, they need to stay in the moment and forget about the big picture.

“We don’t get too far ahead of ourselves,” Housley said. “We’re still in the process. We’re trying to develop young players and continue to focus on areas of improvement and working on our game. …

“The players have really taken ownership in this process. We’ve done a great job up to this point. We’ve put ourselves in a great position, but it is going to get harder.”

As Pominville said, NHL games become tougher and tougher down the stretch as teams try to push up the standings.

“Time and space, there’s not going to be a lot of it, so we need to continue to focus and stay the course and not break at times,” Housley said. “(We need to) feel comfortable, which we have at times in games. When we get in that position again we’ll know what to expect.”

Simply fighting for a playoff spot would’ve been considered progress at the beginning of the season. But at this point, anything short of a postseason berth would be a massive disappointment.

“That’s the expectation now,” Sabres winger Kyle Okposo said of the playoffs. “I just think … we put ourselves in a good position and that’s really all you can do at this point.”

The Sabres play the Bruins, who just got future Hall of Famers Patrice Bergeron and Zdeno Chara back from injuries, twice over the next four games. Their next six opponents are all Eastern Conference teams below them in the standings.

“You want to make sure you push them back,” Pominville said. “But the biggest thing for us is worrying about our game and getting back to playing the way we know we’re capable of and playing the way that led to us having success. We’ve slipped away a little bit from it.”

Still, the Sabres, who are 2-3-1 in their last six contests, haven’t been playing as poorly as it might look, according to Housley.

“You look at our body of work here the last three or four games, we played some really good hockey,” Housley said.

“Just coming off that break, travel, yeah, that had something to play in it,” Housley said. “But I really liked our first period. We were the faster team, we executed, we had quality looks. We didn’t get rewarded for that, so we get into the second period and we got away a little bit from our game.”