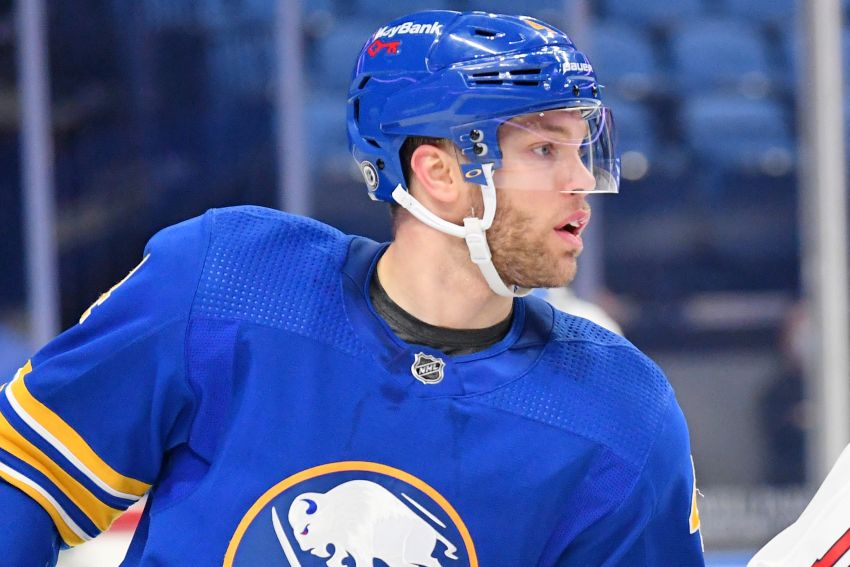 Taylor Hall knows Sabres players did not do enough to save Ralph Krueger’s job. ©2021, Micheline Veluvolu

BUFFALO – When winger Taylor Hall learned the Sabres had fired coach Ralph Krueger, he said he felt sadness and even a little guilty.

Krueger’s presence helped convince Hall, who knows the coach from their days with the Edmonton Oilers, to sign a one-year, $8 million contract with the Sabres.

But Hall, the 2017-18 NHL MVP, has endured perhaps the worst year of his career, mustering just two goals and 16 points in 29 games. Hall, of course, has hardly been alone in his struggles. Nearly every Sabres player has underachieved this season.

“I mean, we didn’t get a job done,” Hall said on a Zoom call prior to Thursday’s 4-1 loss to the Boston Bruins, Don Granato’s first game as interim coach. “I didn’t get a job done for him. Unfortunately, he’s out of the building now through no fault of his own. We weren’t able to win games for him and now we’re here. It was a tough day, for sure.”

If you’ve lost count, the Sabres have dropped 13 straight games and 17 of 19 since their COVID-19 pause ended. Right now, they’re one awful hockey team.

Their first game under Granato looked no different than any of their recent outings under Krueger. They looked listless and sloppy against the Bruins, generating little offense again.

The Sabres at least had a bit of an excuse this time. Following a day off, Thursday’s morning skate was canceled because a member of their hockey staff entered the NHL’s COVID-19 protocol.

Following testing and contact tracing, the Sabres learned at about 12:45 p.m. that Thursday’s game would be played.

So they faced the Bruins having been off the ice since Tuesday’s 3-2 loss to the New Jersey Devils. Granato, meanwhile, hadn’t even had a team meeting.

When he finally met with his players two hours before the opening faceoff inside KeyBank Center, he had to concentrate on game prep.

“It’s been a very strange 36 hours,” said winger Kyle Okposo, who scored the Sabres’ only goal. “The whole year has been pretty strange, to be honest with you, and this is no different.”

So Granato, 53, will finally get to hold his first real meeting and conduct his first practice today.

Granato needs to fix the Sabres’ even-strength play. Their feeble five-on-five attack has helped kick them to the bottom of league.

“More pace,” Granato said of what the Sabres need. “It’s simple. I felt today, at least within our own game, we established at least a decent pace and we didn’t sustain it.”

The American has often been snakebitten, failing to convert his opportunities or hitting the post. On Thursday, his simple shot from inside the blue line handcuffed Bruins goalie Jaroslav Halak.

“It was definitely nice to see that one go in,” Okposo said. “The longer the zero sits there in that column, the more it weighs on you. But, yeah, I mean, it’s nice but same time, we have a lot of stuff to correct and we’ve got to take a deep dive into what’s going on here from everybody. It’s systemic. Like, the whole way through. We have some work to do.”

He added: “Nothing about this year has been simple or easy or straightforward so I guess to get (a goal) that way seems fitting.”