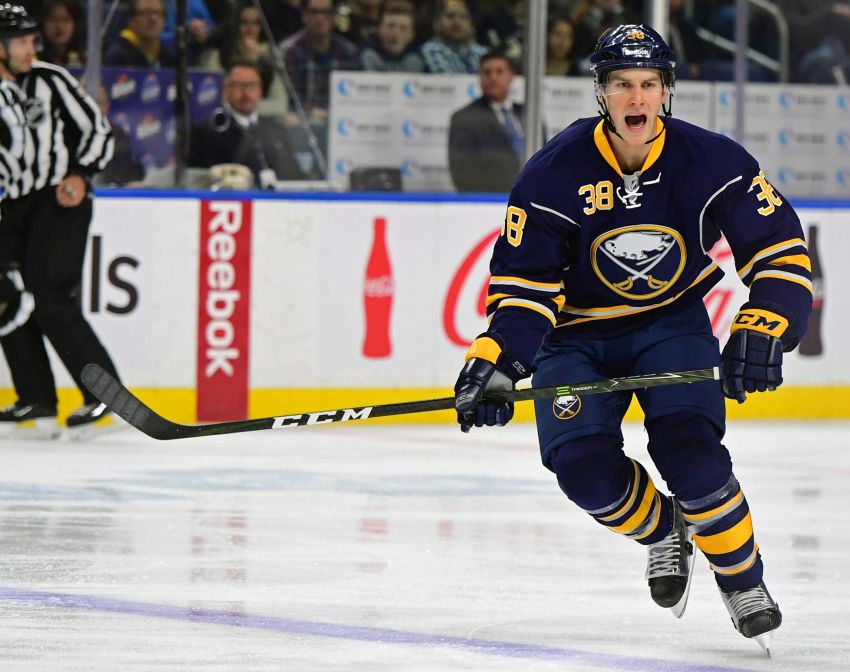 BUFFALO – At the start of a season, a Taylor Fedun-type player – a talented minor leaguer with some limited NHL experience – often has no chance to crack the big club.

“There’s just not that much opportunity when training camp starts, the rosters and the contracts,” coach Dan Bylsma said Sunday after the Sabres prepared for tonight’s home tilt against the Calgary Flames.

Opportunities, of course, inevitably materialize. As the Sabres have recently experienced, injuries often hit hard and come in waves.

Their depth – a mix of prospects and veterans – has been tested. They’ve already dressed 30 players in 18 games, including nine defensemen, as many as they used all of last season.

“We do believe we have players who would grab ahold of that opportunity when it comes, and it’s coming right now in big numbers for a lot of guys,” Bylsma said inside KeyBank Center. “You want them to step in and make the most of the opportunity and really play a game that demands that they play more games.

“Taylor Fedun is a guy who’s doing that right now.”

Fedun, a defenseman, has quickly impacted the NHL’s lowest-scoring team, assisting on both goals the Sabres have scored since they recalled him Thursday. Bylsma promoted him to the top power-play unit for Saturday’s 2-1 shootout win against the Pittsburgh Penguins.

Many veteran call-ups earn a look but eventually go back to the minors. Fedun, however, might have an opportunity to stick around. The Sabres need goals badly, especially from the blue line, which has scored just one goal this season.

But Bylsma and some teammates also mentioned the little things that often go unnoticed – smart plays in the neutral zone or simply getting the puck on net – Fedun has done.

“You kind of want to have him on the ice right now to see if he can continue to make those plays and be that player for us,” Bylsma said.

The sample size is small, but Fedun, 28, has consistently created offense throughout his 14-game NHL career with three other NHL teams, compiling two goals and nine points.

Fedun has also produced in the AHL, scoring 34 goals and 144 points in 277 contests. The Princeton product has two goals and 12 points in 14 games with the Rochester Americans this season.

Brian Gionta sees some of the same qualities in Fedun his brother possesses.

“They have confidence in themselves knowing they can play at this level and continue to impress every time they’re out there and eventually they get their break,” Gionta said. “I like seeing that. I like having guys are like that. You know they’re going to be there for your team.”

Fedun had his choice of teams when free agency opened July 1. He quickly signed a one-year, two-way contract with the Sabres worth $300,000 in the AHL because he said he saw “a young team with a lot of potential that’s heading in the right direction.”

Fedun said he also saw an opportunity as a right-handed shot, which teams often need to balance defense pairs.

“(I knew) that it’s a long season with injuries and stuff, that if I took care of things on my end that hopefully there’d be an opportunity to come up here and try to contribute,” he said.

Fedun now has a chance to contribute.

With three more games in the next five days, only a handful of Sabres skated Sunday, including injured center Ryan O’Reilly (oblique). O’Reilly, out the last four games, is day-to-day, Bylsma said.