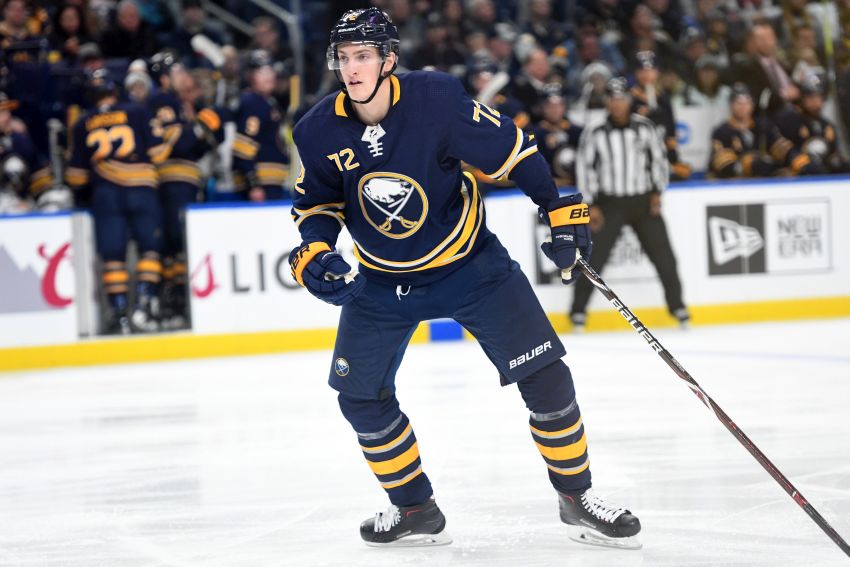 Tage Thompson has one assist this season. ©2018, Micheline Veluvolu

BUFFALO – Having grown up with a father who played pro hockey, Sabres winger Tage Thompson has a unique understanding of the dues-paying process that accompanies developing into an NHL player.

Before Thompson’s father, Brent, began his coaching career, he played 121 NHL games as a defenseman in the 1990s, mostly with the Los Angeles Kings.

Brent, like his son, shuttled between the big leagues and the minors as a youngster and probably sat out some NHL contests as a healthy scratch.

“My dad went through the same thing, so he knows what it’s like and I have someone to go home to and talk to about what I’m feeling, the situation I’m in,” Tage Thompson said prior to Tuesday’s 2-1 win against the Tampa Bay Lightning inside KeyBank Center. “He just lets me know the right way to be acting, (to) come to the rink with a positive attitude.

“Team success is first and foremost. The team’s doing well. The team was doing well when I was out of the lineup. It’s just taking a step back and seeing the bigger picture.”

While 6-foot-6, 205-pound Thompson, 21, played Tuesday, the Sabres scratched him seven times in the first 17 games.

Instead of sending Thompson to the Rochester Americans, where he could play regularly and build confidence in the AHL, the Sabres have kept him in the NHL.

Each day, Thompson, the 26th overall pick by the St. Louis Blues in 2016, works with associate coach Davis Payne on the ice after practice and watches video.

Of course, sitting out as a healthy scratch, a new experience for Thompson, is difficult.

“The toughest part is just not being able to play,” Thompson said. “You grow up, you love the game. The best part is being on the ice playing and doing your thing, making plays. When you’re not out there, you get anxious.”

“If that’s what it takes to help me develop and get better and learn, then I’m all for it,” Thompson said of being scratched. “I don’t think the coaches are doing it to punish me; I think they’re doing it because they want to help me out and they want me to be successful, play in the NHL and play for the Sabres for a long time.

“We’re just working together to make sure that we’re building a strong foundation to have a long, successful career.”

“He’s putting the work in, whether it was when he was out of the lineup, after practice, doing the extra reps,” Housley said. “He has just a great attitude every time he comes to the rink.”

Thompson returned for Saturday afternoon’s 4-3 shootout win against the Vancouver Canucks after sitting out four straight games. He hadn’t made two consecutive appearances since Oct. 27-30.

The Sabres’ message to Thompson, who moves well and possesses a lethal shot, has been clear.

“It’s just rounding out that defensive aspect of my game and working on being physical and using my body a little bit more to maybe create more space for myself and win puck battles,” Thompson said.

Thompson, who has one assist in 11 games, replaced Patrik Berglund on the fourth line beside center Johan Larsson and Zemgus Girgensons.

Berglund is a three-time 20-goal scorer with a hefty $4.7 million salary.

But 16 games into his Sabres career, Berglund, 30, has been a disappointment. So far, the Swede has compiled as many healthy scratches (two) as goals. He also sat out Oct. 18 in San Jose.

“We got a lot of healthy bodies right now and (I’m) just trying to get different guys in the lineup,” Housley said. “We’ve changed losing lineups, we’ve changed winning lineups. We have a lot of games coming up here, so we’re just giving guys opportunities.”

Girgensons returned after sitting out Saturday.

Notes: The Sabres also scratched defenseman Casey Nelson and winger Remi Elie (both healthy). … Sabres legends and Hockey Hall of Famers Dave Andreychuk and Dominik Hasek watched the game from a suite. The Hall of Fame held its annual induction ceremony Monday in Toronto. … Housley coached his 100th game with the Sabres.