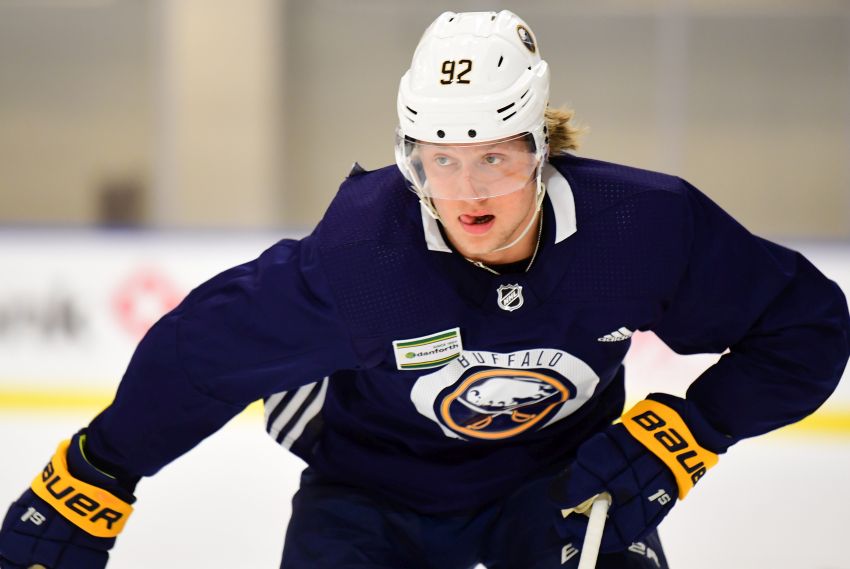 BUFFALO – Shortly after the Sabres introduced first overall pick Rasmus Dahlin to the local media Monday, prospect Alexander Nylander emerged from the locker room clad in workout pants and a hoody and hopped on an escalator inside KeyBank Center.

Nylander, 20, was bound for HarborCenter, where he has been skating during a summer so significant it could decide his future.

“Probably the most important offseason of training in his young life, really,” Sabres assistant general manager Randy Sexton said Saturday after the NHL Draft ended inside American Airlines Center in Dallas. “It’s critical for him.”

It’s critical because through two pro seasons, the 6-foot-1, 192-pound Nylander hasn’t showcased the consistency or tenacity necessary to thrive in the AHL. The slick Swedish winger has often struggled, compiling only 18 goals and 55 points in 116 games.

The former eighth overall pick, who’s scheduled to participate in this week’s development camp, which begins today, needs to get stronger and display a willingness to battle.

The NHL success of three defensemen the Sabres passed on in 2016 – Mikhail Sergachev, Charlie McAvoy and Jakob Chychrun – has brought more attention to Nylander’s deficiencies.

The Sabres’ new regime, which inherited Nylander, has evaluated him for more than a year. Sexton, who’s also the Rochester Americans’ GM, and his boss, Jason Botterill, don’t have the investment in him like former GM Tim Murray.

Sexton believes Nylander needs time. In his only junior season with the Mississauga Steelheads in 2015-16, he dominated the Ontario Hockey League, scoring 28 goals and 75 points in 57 games.

The Sabres could’ve sent Nylander back to the OHL in 2016-17. Instead, they assigned him to the Amerks, making him the AHL’s youngest player.

“He’s going to be a third-year pro, and I think everybody gets wound up because Alex may or may not have delivered at the same offensive output that people may have expected or anticipated,” Sexton said. “But I think we have to recognize his age. If he was in playing in Mississauga in the OHL, he might have had 140 points. People would have been saying, ‘Eureka, what an offensive gem we have.’

“Everything needs to be held in perspective. The American League is a very good league and it’s very difficult for young players. It’s not unusual for them to struggle a bit, and Alex is no different. … We still continue to have high expectations for Alex.”

Development camp, the first opportunity to watch Dahlin with the Sabres, opens today with two sessions (2:30 and 4 p.m.) at HarborCenter. The defenseman’s group hasn’t been announced yet.

The Amerks have re-signed goalie Adam Wilcox to a one-year AHL contract, the team announced Tuesday.

Sexton said Saturday he would like to re-sign forward Colin Blackwell, who scored 17 goals and 45 points in 61 games last season after beginning the year on a tryout.

Sexton on how active the Amerks plan to be during free agency: “We’re in great shape on the back end for Rochester. We have a little bit of work to do up front.”