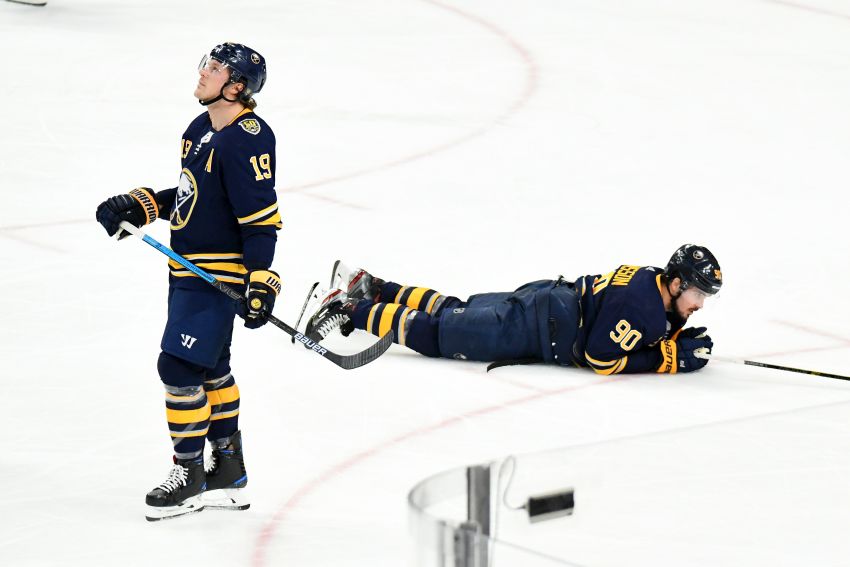 BUFFALO – Halfway through Tuesday’s shocking 6-4 loss to the Tampa Bay Lightning, Sabres captain Jack Eichel showcased why he might be underutilized as a penalty killer.

With the Sabres up 3-1, Eichel pounced on a loose puck in his own zone and zoomed down the ice. When the slick center hit the right circle, he undressed defenseman Kevin Shattenkirk before skating through the slot and backhanding a shot by goalie Andrei Vasilevskiy for his first NHL short-handed goal.

The goal ignited Eichel, who celebrated wildly, and the crowd of 18,465 inside KeyBank Center, which was still buzzing from watching Sabres defenseman Jake McCabe fight Mikhail Sergachev after the defender hit Eichel.

But within minutes, the Sabres would be reeling.

“We have momentum and then we piss the game away,” a curt Eichel said following the Sabres’ fourth straight loss and seventh in eight games (1-6-1).

The Sabres’ began imploding during a power play minutes later. Instead of seizing an opportunity to grab a commanding lead, center Marcus Johansson was whistled for hooking after giving the puck away.

“That penalty definitely did it, shifted the momentum,” Krueger said.

Then Tampa Bay’s talented forwards took over. Alex Killorn scored on the ensuing power play at 13:57. Tyler Johnson followed at 16:55.

Shattenkirk tied the game 6:20 into the third period, exacting some revenge after looking silly earlier. Then Killorn’s second goal at 8:08 gave put the Lightning up.

The Sabres lost all four of their meetings with the Lightning this season and have dropped 20 of the last 24 games against their Atlantic Division rival.

“We definitely came out and played the game we wanted to play,” Krueger said. “It’s the story of two halves. That first half was very disciplined and we didn’t give up much. … More than anything, we were on our toes, we were playing aggressive, we took away the space that Tampa likes to have, and the last 26, 27 minutes (are) just unacceptable. It’s going to take a little longer to digest here, a few hours.”

So now what? The Sabres, a fragile team with a recent history of enduring some long losing streaks, need a quick response. They host the Edmonton Oilers on Thursday.

Right now, exactly halfway through the season, the Sabres are 17-17-7. Their 41 points rank sixth in the Atlantic Division, five points behind the third-place Lightning, which has three games in hand.

What can help the Sabres break out of this rut?

“It’s details,” said Johansson, who played for the Stanley Cup last year with the Boston Bruins. “It’s when you’re up 4-1, 4-2, 4-3 or whatever it is, just keep playing the same way. You can’t sit back too much and be scared of playing and start thinking you can do whatever you want, either, because you’re leading.

Converting some power plays would help. So would shooting.

The Sabres are zero of 14 over the past five games and just two of 18 in the past seven contests.

“You could even hear it from the crowd,” Krueger said of the plea for shots. “We definitely gotta put pucks on the net. There is a lot of control, there is a lot of O-zone time there, and without shots, you’re not going to get any fruit of the labor of the power play. And the shots have to hit the net, right?

“It (just) looks like (we’re) squeezing it, trying too hard, forcing it.”

Eichel said of the power play: “Same story. Nothing new. You guys saw it.”

The Sabres had a few bright spots Tuesday. Johansson, Conor Sheary and Jimmy Vesey all scored.

All three forwards have been struggling to produce offense.

McCabe’s retaliation was also notable. In the two earlier meetings, the Sabres let the Lightning get away with injuring two Sabres regulars – forward Vladimir Sobotka and defenseman Rasmus Dahlin – with dirty hits.

“That’s what we need to see from the team, of course,” Krueger said of McCabe’s response. “We’ve had a strange series against Tampa this year with the physicality, but it was good to see Jake step up there. We know he’s got it in him.

“He did get an instigator for the talking, but it was important that he did that.”

Winger Dalton Smith, a tough guy the Sabres signed to an NHL contract Monday and brought up just for this game, skated just one minute, 26 seconds over four shifts. He didn’t play after the second period.

Smith tried fighting Lightning defenseman Luke Schenn, but an official broke it up. On his way out of the penalty box following his roughing minor, the Sabres scored.

So Smith earned a plus rating in his NHL debut.