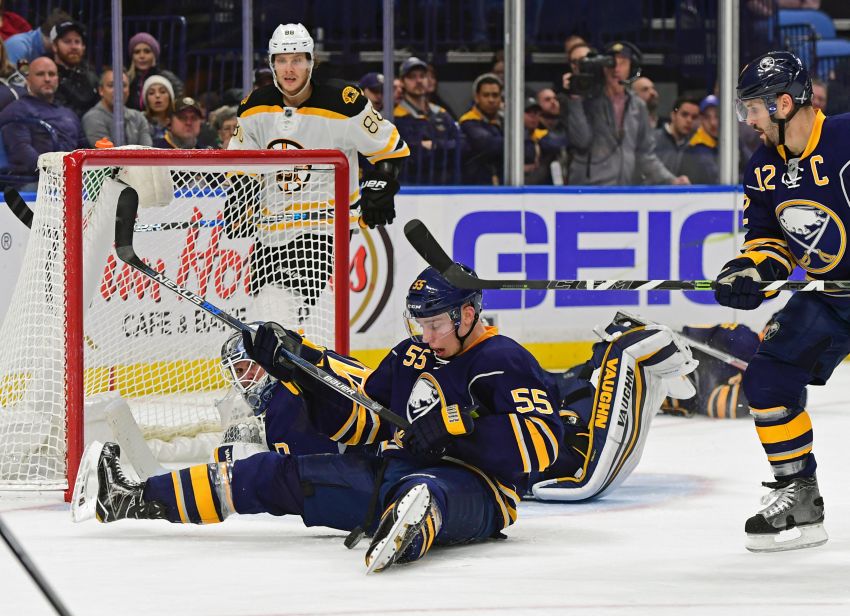 BUFFALO – Ten minutes after Thursday’s demoralizing 4-2 loss to the Boston Bruins, the anger and shock that accompanies blowing a two-goal lead hadn’t worn off. As some stunned Sabres spoke quietly, cursing from a restricted area behind the dressing room occasionally erupted.

It was that kind of loss for the Sabres, a team already fighting for its playoff life.

The Sabres, slow starters all season, pounced on the Bruins, playing perhaps their best hockey all season.

The 2-0 lead looked commanding. For one of the few times this season, the capacity crowd of 19,070 fans inside KeyBank Center roared all period.

“We dominated that period,” Okposo said. “Probably our best start of the year.”

Bylsma said: “Certainly, you take a two-goal lead any night after a period and you think you’re going to get a point.”

Every point is precious for the Sabres, who trail the third-place Bruins by eight points for the Atlantic Division’s final playoff spot.

In the era of the loser point for reaching overtime, erasing a deficit that large, even with more than three months left in the season, is an arduous task.

The Sabres still have three games in hand on the Bruins. The teams meet again Saturday afternoon in Boston.

“We got a huge game,” Sabres defenseman Josh Gorges said.

As expected, the Bruins, a veteran team, came back hard at the Sabres, tying the game by the 16:13 mark of the second period. Meanwhile, their ferocious forecheck stifled the Sabres.

Ryan Spooner scored the go-ahead goal 16:07 into the third period, blasting a shot from high in the slot by Sabres goalie Robin Lehner, who was screened. Spooned later added an empty-netter.

“We just exhaled,” Gorges said. “We got a lead, we felt a little comfortable and we stopped doing the little details, the things that were making us successful in the first period, gave them a little bit of life.”

Patrice Bergeron made it 2-1 3:20 into the second period. David Krejci’s power-play goal tied it at.

The Sabres, Okposo said, “did a lot of good things” and “probably did enough to win that game.”

“In a third period like that, 2-2 game, tight game like that, both teams seem to be making the right plays, seemed like more more of a playoff-intensity atmosphere,” he said. “One mistake cost us. That’s the difference, it’s a very thin line when you get into games like this.”

Foligno added: “It’s frustrating. We talk about starts, we get it. We just don’t have a good finish.”

The Sabres lost winger William Carrier to a hand injury, Bylsma said. The rookie left after fighting Adam McQuaid, who wanted retribution after Carrier’s hit knocked David Backes out of the game.

Bylsma had no update on Carrier, who has been nursing another injury to his hand.