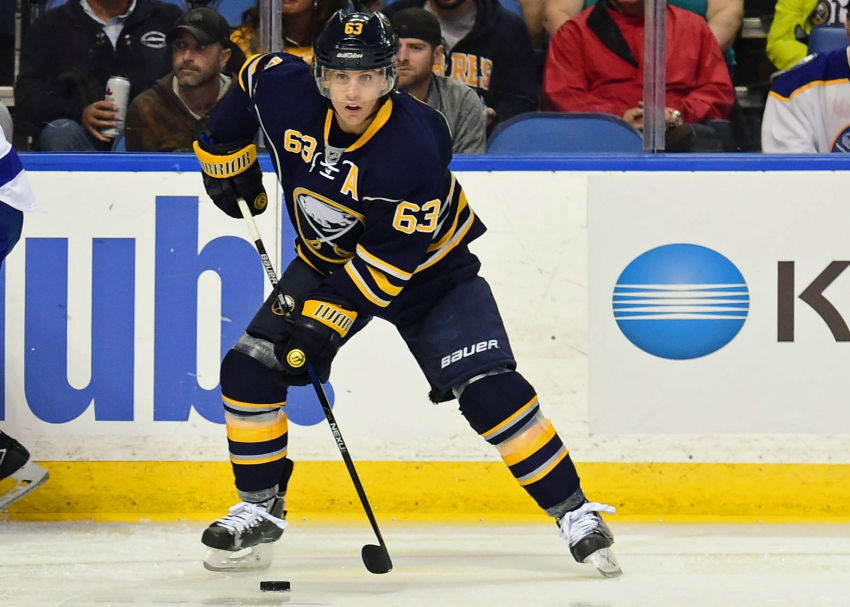 BUFFALO – Here they go again. Sure, five games is a small sample size. But the Sabres, even with several talented new offensive threats in their arsenal, still can’t score goals.

The rebuilt club has only nine goals, 1.8 a game, and just four at even strength. Not surprisingly, the Sabres are 1-4, the same mark they had at this point last season.

They scored four times in their only victory and haven’t netted more than two in any other game. Only one player, rookie Jack Eichel, has two goals.

Are they headed down that same path? Shouldn’t newcomers like Eichel, Evander Kane and Ryan O’Reilly bolster the offense?

“We’re getting a lot of shots, we’re playing hard,” Sabres winger Tyler Ennis said Monday inside the First Niagara Center. “I think we’re maybe gripping it a little too tight.”

Give it time, Ennis said. The opportunities the Sabres keep creating – they outshot an opponent for the third time Saturday, a feat they didn’t accomplish until Dec. 13 last season, their 30th game – will eventually pay off. The Sabres have averaged 29 shots a contest.

O’Reilly added: “It’s good to know we’re getting (chances), but I don’t think we’re happy with that. We want results. We want goals. It’s definitely something we have to address.”

The Sabres generated plenty of chances in Saturday’s 2-1 loss in Tampa Bay, pumping 32 shots on goal, including 16 during a first period in which they limited the Lightning to three.

An alarming lack of finish ultimately cost them. Seconds after Eichel missed a breakaway, the Lightning tied it. The Sabres also narrowly missed several chances in front, including a couple from Sam Reinhart, who scored his first NHL goal earlier in the tilt.

Ennis believes the Sabres are “coming together” and “improving.”

“I think we’ve had spots of brilliant, spots of not-so-brilliant,” he said.

The effort against the Lightning can be used as a building block, Bylsma said.

“It’s easy to look at and say we won one out of five and say that’s not where we’d like to be or where we thought we’d be,” he said. “We’re talking about building and developing into a winning team. When you look at some of the things that we have done, we’ve done a lot of the things we need to do to win, we just didn’t get the win, particularly in the last game against Tampa Bay.”

Ennis’ seven shots on goal Saturday tied his career high. The speedy 26-year-old has been trying to ditch his pass-first mentality this season. His team-high 22 shots rank 12th in the league.

“I’ve been trying to shoot it a little more,” said Ennis, who has one goal and two points. “I think when I’m thinking shot, I’m in the paint a little bit more. It opens up a little more for me. I know I like to be a pass-first guy. Sometimes I fake my way out of chances.”

If the Sabres start scoring, they could finally reward goalie Chad Johnson, whose below-average numbers – 1-4 with a 2.70 goals-against average and a .896 save percentage – don’t illustrate how strongly he has performed subbing for injured starter Robin Lehner.

“I think he’s given us a chance to win every game he’s played,” Bylsma said. “I don’t know if you can ask for much more from him. Going over each game that he has played, I say he’s made some strong saves, he’s been solid.”