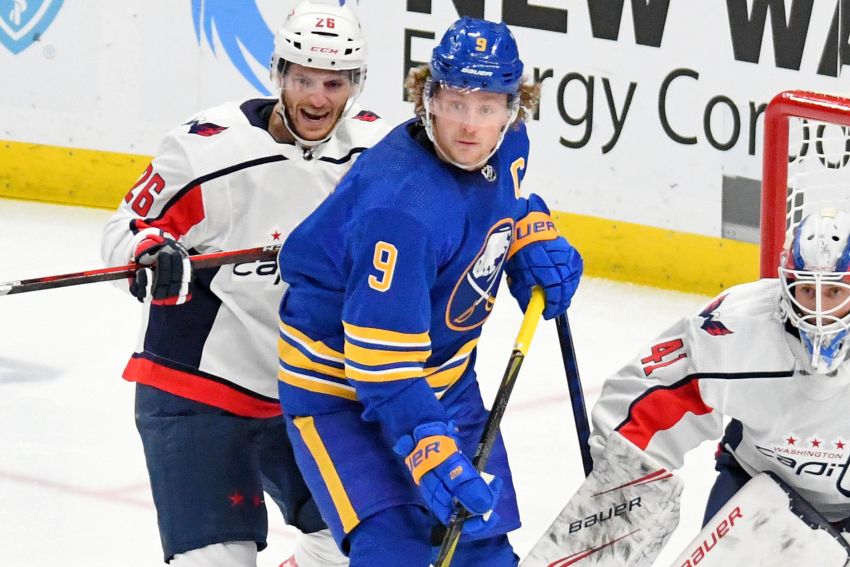 Jack Eichel said he feels a disconnect with the Sabres. ©2021, Micheline Veluvolu

Adams stated it a few different ways, but the last four words and the strong message remained the same.

“We are going to get this right with the people that want to be here,” Adams said during an end-of-season Zoom call Wednesday.

The Sabres, who just finished dead last, have endured a brutal week.

On Monday, Eichel, 24, the face of the franchise, said he felt a “disconnect” with the Sabres over how they’ve handled his season-ending neck injury. The ultra-talented center was non-committal when he was asked about his future.

Earlier that day, Reinhart, 25, the Sabres’ leading scorer, and Ristolainen, 26, their top defenseman, made it clear they’d welcome a change of scenery.

The Sabres, of course, have missed the playoffs a record-tying 10 consecutive seasons, a stunning streak of futility. So not surprisingly, Adams, who has served as GM less than 11 months, said they must “be open and willing to look at anything and everything.”

Adams doesn’t believe his relationship with Eichel has been fractured. Still, Adams did not mince words, cutting right to the chase and addressing the topic on everyone’s mind before he could be asked about it. He doesn’t feel there has been a disconnect between the team and Eichel, who herniated a disc in his neck March 7.

In Eichel’s first comments Monday since suffering the injury, he also said he was “bit upset about the way things have been handled.”

After the team doctors diagnosed Eichel with a herniated disc, he sought second opinions. Adams said Eichel’s camp has talked about the star undergoing a surgery “that’s never been done on a National Hockey League player before.”

“You’re talking about a young professional athlete that wants to be healthy and wants to play and wants to win,” Adams said. “I don’t want to put words in Jack’s mouth on why he reacted the way he did on Monday, or why there was emotion there. But I’ll flip it around on a positive note to say we want players and people in this organization that are passionate, that want to win, that want to be here, and are excited to put this jersey on and make this city proud. …

“The disconnect in my mind right now is from our team to our fan base and our city in making the people of this community proud. And I understand what that means. And that’s something that I think about every day. I’m extremely focused on where we go from here and less focused on the past, and the past 10 years. You certainly can learn from it, but I’m focused on solutions, and I’m focused on the proper conversations to point this franchise in the right direction.”