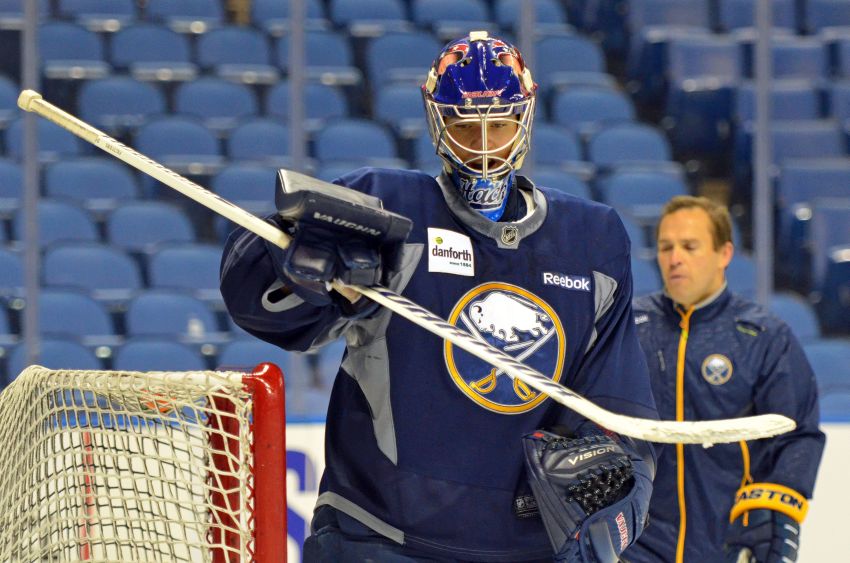 The Sabres could call on Matt Hackett often down the stretch. ©2015, Dan Hickling, Olean Times Herald

BUFFALO – In less than a year, Sabres prospect Matt Hackett morphed from Ryan Miller’s possible heir apparent into an afterthought, the fifth goalie on the rebuilding team’s depth chart.

Hackett struggled last year in Rochester, posting career-worst numbers. Then the 25-year-old tore up his knee during a late-season recall, shelving him for nine months.

As Hackett rehabbed, Jhonas Enroth and Michal Neuvirth battled for the Sabres’ starting job. In Rochester, Nathan Lieuwen and Andrey Makarov tried to build off of strong seasons.

But Hackett, a key piece in the Jason Pominville trade with Minnesota late in 2012-13, has emerged as a potential goalie of the future again, or at least someone the Sabres could keep in their plans.

The Sabres recently traded Enroth and Neuvirth. A concussion has sidelined Lieuwen since January. Chad Johnson, part of the Neuvirth trade with the New York Islanders, figured to get the bulk of the starts down the stretch, but he suffered a lower-body injury Friday and could be lost for the season.

Prior to his recall Saturday, Hackett was tending some strong goal with the Americans, posting a .957 save percentage in his last two starts.

Hackett must play six more NHL games this season or else he becomes an unrestricted free agent this summer. The Sabres probably want to examine him during the final 16 contests.

“What happens happens,” Hackett said Monday following practice inside HarborCenter. “I just want to show that I can play at this level. I know deep down I’m a good goalie. I know I can play here.”

Hackett struggled Saturday in his second NHL start this season, allowing four goals in just under 34 minutes before getting yanked from the Sabres’ ugly 6-1 loss in Washington.

“That’s one theory to look at, throw him right back in,” Nolan said. “You get bucked off the horse, the first thing you want to do is get back on.”

“The hot hand goes,” Nolan said. “We’ll see how it goes. It was tough last game for both goaltenders. They both played the night before, a lot of travel.”

Hackett played a lot recently in Rochester, starting 11 times in a month and overtaking Makarov. He believes his 37-save effort in the Amerks’ 3-2 overtime win last Tuesday in Utica proves he has regained his old form.

“I just felt really comfortable, really relaxed, didn’t really think too much, just played, had fun,” he said. “That seemed to work.”

Hackett endured a long road back after hurting his right knee April 12 in Boston. He spent three months this season rehabbing with the Sabres before they sent him to Rochester, where he made his season debut Jan. 10.

“I don’t take anything for granted now,” Hackett said. “I mean, I know that your career could be gone in a second. It was a pretty scary injury, and I just want to come here and have fun every day.”

Of course, Lindback could also receive some starts down the stretch. The Swede sat for almost three weeks after the Sabres acquired him from Dallas in the Enroth deal.

These days, Lindback, a free agent this summer, understands he’s playing for a wide audience.

“You never know who’s watching, wherever you are,” he said.

“I’ve been feeling pretty good all this year,” he said. “I still haven’t won a game here, so I can’t say I’m happy with the way it’s going. I feel good. I see the puck well, I think. There’s room for improvement.”

Lindback has been trying to utilize his 6-foot-6, 215-pound frame.

“What I’ve changed a lot in my game over the last couple years is I try to be more patient, maybe a little bit deeper in the crease and try to not be overaggressive and use my size to my advantage,” he said. “I used to be all over the place.”