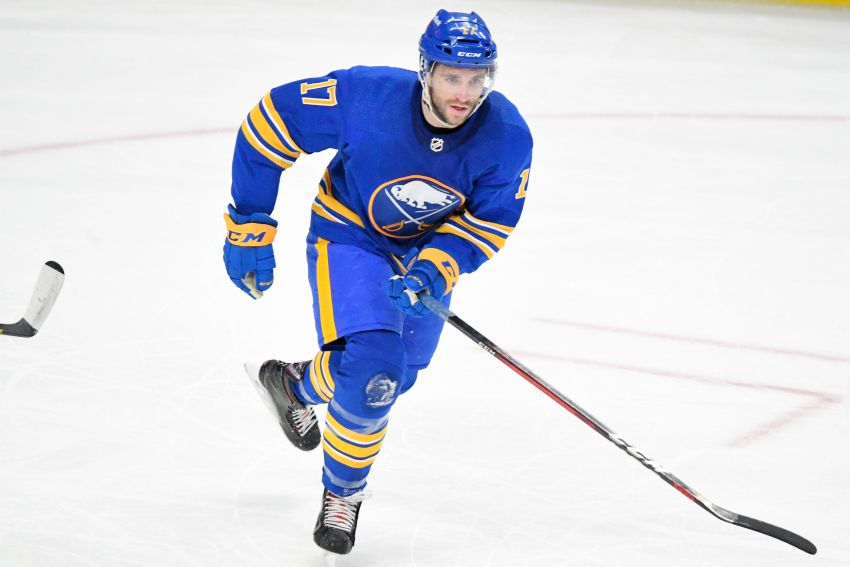 Steven Fogarty has an opportunity to stick in Buffalo. ©2021, Micheline Veluvolu

BUFFALO – There was no wild celebration. Not even a fist pump.

When Sabres winger Steven Fogarty scored his first NHL goal on Wednesday, he reacted as if he had done it 100 times. A smiling Fogarty simply raised his stick, pointed to defenseman Rasmus Ristolainen and shared a few fist bumps with his teammates.

By the time he started skating back to the bench, his grin had disappeared.

“It just happened so quick and you’re kind of in the moment,” Fogarty said on a Zoom call of scoring the Sabres’ third goal in their 6-1 win over the Philadelphia Flyers. “It is something that you envision and dream of your whole life but once it happens, it does happen quick. It was a good point in the game to get a goal so that’s what I was thinking.”

“So stoicism, I think, is in the family,” Appert said. “He is a serious person. It doesn’t mean he’s not having fun. Don’t mistake it, he loves the game of hockey. But he is serious, he is business. I really like the way he’s playing up in Buffalo right now.”

Fogarty, 27, might have an opportunity to stick in Buffalo the rest of the season. He has played two straight games and four of the last five entering Saturday’s contest against the New York Rangers at KeyBank Center.

The Notre Dame product has recorded his first three NHL points in the last week. About five minutes after scoring, he assisted on center Casey Mittelstadt’s goal.

Fogarty has mostly skated at right wing this week on the fourth line beside center Cody Eakin and Tobias Rieder.

“I think he probably feels the most comfortable that he’s felt in the NHL,” Appert said. “I think a lot of times when he’s been in the NHL, he’s felt he’s had to run around and go hit everything in sight. He seems to be finding his game right now and finding a balance between having to be a bottom-six type player at that level, having to bring that energy and physical competitiveness, but also using the intelligence that is an underrated asset in his game.”

The Rangers drafted Fogarty in the third round in 2011, 72nd overall. He spent most of the last four seasons with their AHL affiliate, the Hartford Wolf Pack. He earned 18 NHL games over that stretch, often playing short minutes during his occasional recalls.

But so far, the Sabres organization has offered him the opportunity he wanted when he signed a one-year, two-way contract Oct. 19.

Fogarty enjoyed a leading role with the Amerks, scoring five goals and eight points in 10 games. He made his Sabres debut Feb. 15 and has also spent time on their taxi squad.

A rash of injuries over the past two weeks created a chance Fogarty wants to seize.

“Every year I’ve been a pro so far I’ve started down in the minors and I just had a few stints in the NHL,” he said. “Once you get a taste of it, you just want to keep getting back up here.”

Granato said no one texted him following his first six games as Sabres coach. Apparently, no one wanted to bother him after a loss.

“My dad doesn’t even text me anymore because he’s afraid to say something because we haven’t been winning,” he said Thursday morning.

However, after Wednesday’s win, his first as interim coach, he said his phone “lit up pretty good.”

“So I’d wondered if people were watching or stopped watching but apparently they didn’t,” Granato said. “All of the messages were great and very welcomed and it’s always neat to see that.”

Granato’s sister, Cammi, a Hockey Hall of Famer, tweeted, “Congrats to my big bro, Donny, on his 1st win as an NHL head coach!”

Amerks winger Jack Quinn, the eighth overall pick by the Sabres in 2020, missed Friday’s 6-2 loss to the Syracuse Crunch for what Appert called a “maintenance day.”

“He just need the day to look to take care of a few things from a physical perspective,” Appert said.

Appert said he expects Quinn to play Saturday in Syracuse.

The Sabres had Friday off.