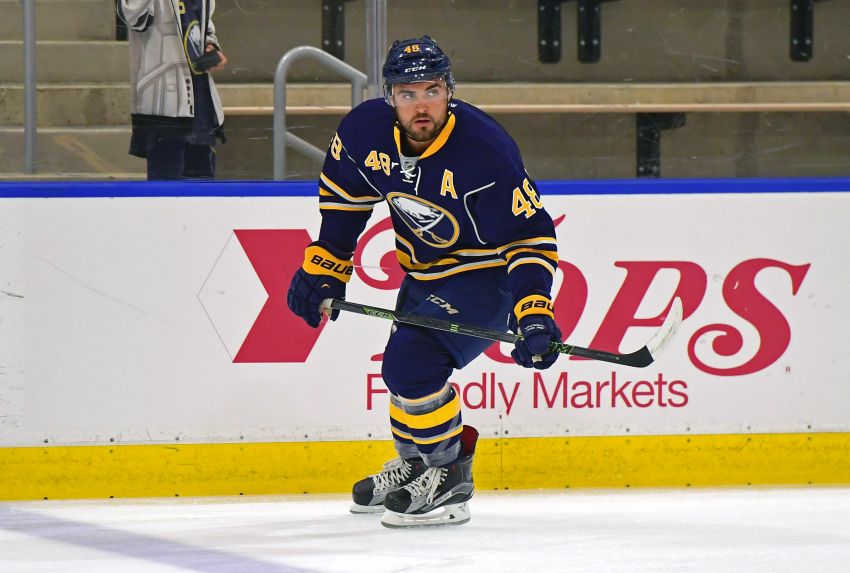 BUFFALO – If William Carrier had stayed healthy late last season, the Sabres prospect likely would’ve earned his first trip to the NHL. But Carrier, an often overlooked winger, broke his hand in March.

When this season started, the Sabres passed on him twice to recall Justin Bailey and Nick Baptiste. Carrier, meanwhile, kept impressing in the AHL, compiling three goals and four points in seven games.

The Sabres decided Carrier, 21, deserved a chance, so they summoned him from the Rochester Americans earlier today. Bailey has been sent back.

“It’s great, especially early in the season,” a smiling Carrier said this afternoon inside KeyBank Center. “I’ve proven that I could do it. I had a good start in Rochester.”

Wearing No. 48, the 6-foot-2, 212-pound Carrier skated on the left wing today with Baptiste and center Derek Grant. Carrier should debut Saturday in Ottawa.

“He’s been playing the best down there,” Bylsma said. “They have a few guys that are playing well but banged up a little bit.”

Carrier enjoyed a strong development camp in July, but he wasn’t impressive during the preseason.

“But (what) I like about his game is speed and tenacity, he’s been a hard, physical guy, and he’s been a guy who has had a presence at the net.”

Carrier, who had 13 goals and 30 points in 56 games last season, said he was in bed around midnight when the Sabres called. He then got up and phoned his family with the special news.

In other news, Bylsma said winger Evander Kane, out since cracking four ribs Oct. 13, has been skating “quite hard, quite extensively” on his own the last four days. Kane needs to up his physicality in drills next.