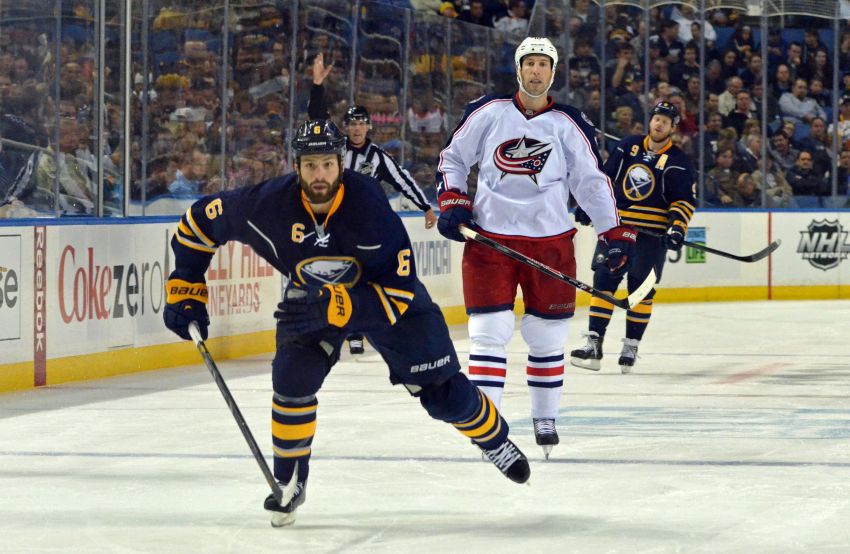 BUFFALO – His coaches and the media have nothing on struggling Sabres defenseman Mike Weber, who calls himself his hardest critic.

Right now, the 25-year-old’s reeling, enduring arguably the roughest stretch of his 179-game career. His wretched minus-8 rating ranks dead last – 599th, to be exact – in the NHL. He was an ugly minus-4 in Thursday’s 4-1 loss to Columbus.

Following the game, a bearded Weber was visibly agitated, growing angrier by the word.

“I expect nothing but the best for myself,” a clean-shaven Weber said Friday inside the First Niagara Center after the winless Sabres prepared for tonight’s tilt in Chicago. “But I’m not a perfect person, not a perfect player, and that’s why I come with the same attitude of every day I’ve got to continue to get better day in, day out. That was a speed bump for myself.”

Weber might get bumped from tonight’s lineup against the Blackhawks, the reigning Stanley Cup champions.

Sabres coach Ron Rolston skated Weber beside 18-year-old rookie Nikita Zadorov, who’s recovering from a finger injury, during Friday’s practice, a sign he could be scratched.

Will Sulzer, a healthy scratch since his recall late last week, make his season debut?

“We’ll see,” Rolston said. “He’s practiced real well. He’s one of the best puck-movers we have, passers. So (it’s) quite possible.”

Clearly, the Sabres (0-4-1), one of two remaining winless teams, must change anything they can.

Tonight’s David and Goliath matchup against South Buffalo native Patrick Kane and the mighty Blackhawks will be one of the season’s toughest challenges.

So far, momentum has been non-existent.

The Sabres have scored five goals and held a lead for about 10 of the 302 minutes played.

“It’s the situation we’re in now,” Myers said about the poor start. “We’re just going to have to work that much harder to get out of it.”

Like Weber, Myers is slumping badly. His minus-3 effort Thursday made him minus-7 on the young season.

The 23-year-old, a colossal disappointment last season, spent the summer working on his mental and physical conditioning and enjoyed a strong training camp.

But Myers hasn’t showcased any progress during the regular season. His lack of on-ice awareness has been alarming.

“It’s a matter of not forcing things for me, and (Thursday) I got back into old habits,” said Myers, who was caught pinching on the Blue Jackets’ third goal. “It’s just a matter of really staying focused on letting the game come to me. That’s what I need to do going forward here.”

Going forward, the gritty Weber must also cut down on his miscues. He’s been a minus in each game since earning his first opening-night assignment.

“There’s a lot of good parts of my game,” Weber said. “I’ve been playing hard, battling hard. … I made four mistakes in the game and they all wound up in the back of our net. Just coming to work every day, I know my job. I know my responsibilities. I know what I have to do to be successful in this league and for this team.”

Rolston said Henrik Tallinder (upper body) could return Monday. The defenseman, out the last three games, has been practicing in a non-contact role. He just started shooting again.

Update: Weber will sit for Sulzer.