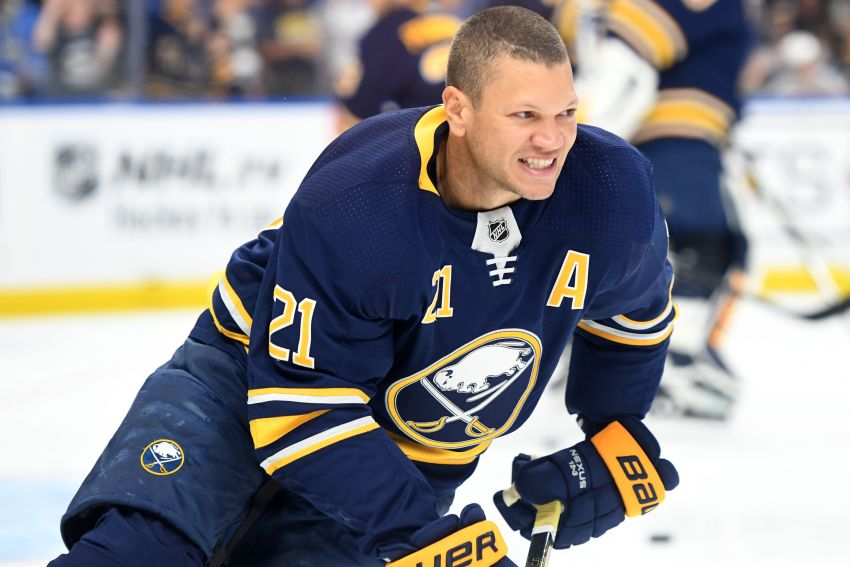 Kyle Okposo said the Sabres never got away from their game over the weekend. ©2018, Micheline Veluvolu

BUFFALO – If the Sabres eventually morph into a playoff team, remember the significance of the five-game road trip they just completed, especially the back-to-back wins they closed with in Los Angeles and Anaheim.

The Sabres went 3-2-0 on the 10-day trip, starting with a 3-0 victory over the Arizona Coyotes before suffering consecutive losses.

While they fell behind 2-0 in Thursday’s 5-1 setback to the San Jose Sharks, they got back in the game, setting the stage for what might’ve been the team’s best weekend in years.

On Saturday, they demolished the Kings 5-1, winning their first game in LA since 2003. On Sunday, they rallied from a 2-0 second-period deficit, beating the Ducks 4-2.

“Those two games, we never got away from our game the whole time,” Sabres winger Kyle Okposo said this afternoon following a skills practice inside KeyBank Center. “Everybody was composed, calm and doing their job. Everybody just did what they were supposed to. We didn’t do anything special.”

Coach Phil Housley said the Sabres’ response in San Jose carried forward. They outplayed the Ducks early on, yet got stymied by goalie Ryan Miller.

“That was a valuable lesson,” Housley said. “That’s what I told the guys, that I like the way we responded. So we were in that position again in Anaheim, and I thought we were playing some terrific hockey carrying the play.”

He added: “I think it’s because of the road trip and the experiences they had together. They knew they deserved to win the game the way they were playing.”

Housley said experiencing a long road trip so early allowed the Sabres to bond and become “a tighter group because of it.”

“They went through some adversity on the trip,” said Housley, whose team also lost 4-1 to the Vegas Golden Knights. “I think the guys rallied around it and got together and had a strong turnaround on the weekend. I think that’s because of the road trip.

“All you’re doing is thinking about hockey, you’re together a lot, you’re on the bus, you’re going to the rink.”

Check back later for more on the Sabres, who host the Montreal Canadiens on Thursday.

Instead of a normal practice today, the Sabres had a skills session with the staff from the Academy of Hockey. The team returned home from California early Monday morning.

Former Sabres forward Matt Ellis put the players through a series of drills.

“He’s a very smart man,” Housley said of Ellis. “He really knows the skill element as far as practicing goes. But he comes across really well to the guys.”

Housley believes Ellis could coach in the AHL or NHL someday.