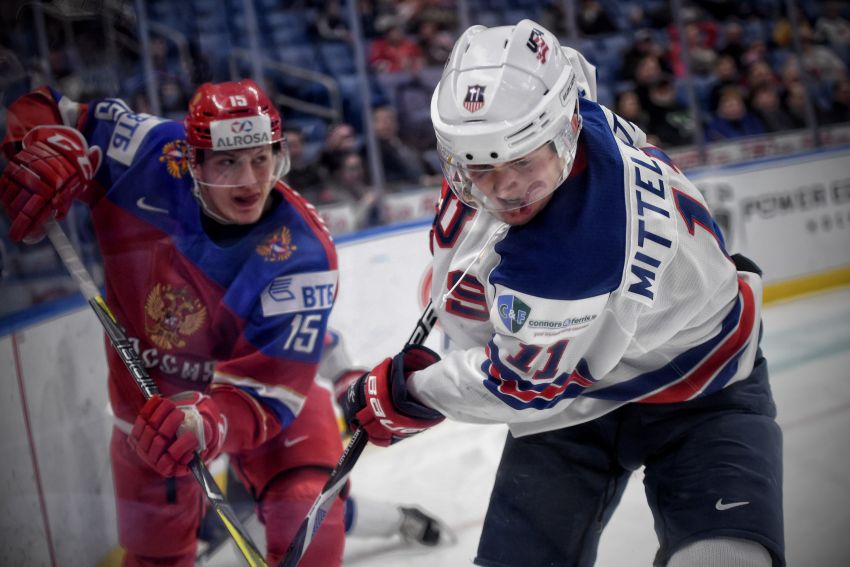 Right now, having just signed his three-year, entry-level contract, Mittelstadt is beginning his NHL career. The slick center will likely make his debut Thursday against the Detroit Red Wings.

“As young as I can remember I wanted to play in the NHL,” Mittelstadt said Tuesday during his introductory news conference inside KeyBank Center. “My steps were always kind of I want to play high school, I want to go be a Gopher and go to the NHL. It’s pretty much every Minnesota kid’s dream.

At first, Mittelstadt was disappointed the season ended so abruptly.

Then Mittelstadt and the Sabres began discussing his future. He said the recent resignation of Minnesota’s legendary coach, Don Lucia, wasn’t a factor in his decision.

By Sunday, after Sabres general manager Jason Botterill gave him time to think about his next move, Mittelstadt was ready to sign.

Mittelstadt said the Sabres’ desire to have him helped him leave school.

Clearly, Mittelstadt’s comfortable with the Sabres and in his new city. He attended development camp last July, so he knows many of the organization’s other youngsters and some of his new teammates. He also dazzled for Team USA at the World Junior Championship the Sabres hosted after Christmas.

Sabres center Jack Eichel, 21, welcomed Mittelstadt to the team Tuesday by taking him to lunch at Chipotle.

“It’s definitely something pretty cool for a kid like me,” Mittelstadt said of dining with the American star. “I think … getting to know him and having him welcome you like that, it’s something really special for me. I think it’s good to know that he’s excited I’m here and that he’s interested in getting to know me.”

Sabres coach Phil Housley, of course, will also get to know Mittelstadt well over the final six games. Housley, a Hall of Fame defenseman, is a Minnesota hockey legend. Like Mittelstadt, he played high school hockey and jumped to the NHL as a teenager.

So the coach and his newest player share something unique.

“Everything I’ve heard, everyone has said he’s a really good guy, a really good coach,” Mittelstadt said. “He likes to play fast, play with pace, I think that fits my game really well. It’s definitely exciting. I think it’s nice to be able to relate to him a little bit, both playing high school hockey, things like that.”

Mittelstadt will wear No. 37. He said the number has no significance.

Notes: Former Sabres defenseman Christian Ehrhoff, who spent the last two seasons playing in his native Germany, has retired. Ehrhoff, 35, signed a 10-year, $40 million contract the with the Sabres in 2011. After using a buyout in 2014, the team is paying him $857,143 a season until 2027-28, according to capfriendly.com. … The Sabres, who had Tuesday off, sent winger Justin Bailey back to the Rochester Americans.