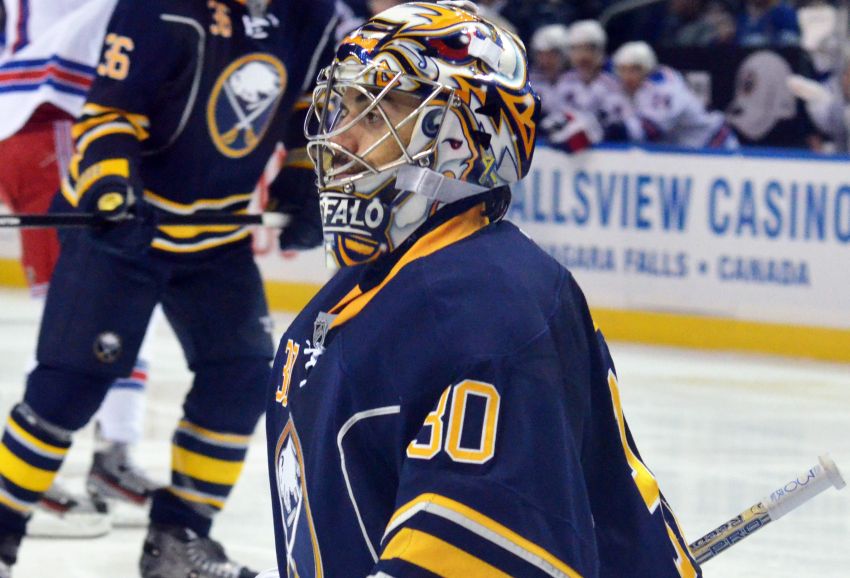 The Sabres would buckle down facing elimination. Besides, the Rangers scored on fluky deflections.

Still, the crowd of 19,003 fans inside the First Niagara Center needed to vent.

So the surly spectators gave goalie Ryan Miller a Bronx cheer after he stopped a dump-in as the final seconds ticked down. Miller then nearly whiffed trying to clear the puck, misplaying it directly to the Rangers’ Ryan Clowe.

Clowe made it 3-0 with just four seconds left.

“It’s one of the worst mistakes I’ve made in my whole time here, worst timing,” a visibly agitated Miller said after the Sabres’ embarrassing 8-4 loss eliminated them from playoff contention.

He added: “They can mock me for that horrible play.”

The Sabres never recovered. The Rangers would score five goals in just 2:58, a new franchise record.

Miller received another Bronx cheer before Anton Stralman scored 1:13 into the second period, the last goal before he was yanked.

Earlier in the period, the former Vezina Trophy winner sarcastically saluted the crowd by waving after he played the puck.

“If they can dish it out, they can take it back,” Miller said. “I sat there and took it. I screwed up. I made a critical error. That is all about me connecting with the puck (on Clowe’s goal). Well, I didn’t feel it on my blade as I started to shoot it. … It’s pretty a bad decision.”

The scene was reminiscent of legendary goalie Patrick Roy’s exit from Montreal in 1995. Roy demanded a trade after saluting an angry home crowd during an embarrassing loss.

“Well, I would love to have what happened after that,” Miller said about Roy, who won two Stanley Cups with Colorado. “Just saying. Doesn’t mean I want to leave.”

Sabres winger Thomas Vanek said Miller has “done a lot for this franchise.”

“But the fans are entitled to whatever,” he said. “Me, personally, I’d give him a pat on the back. He’s won us a lot of hockey games.”

By then, just 1:40 into the second period, the game was over.

The Sabres have missed the postseason two straight seasons and four of the last six.

“We haven’t done it,” Miller said. “We haven’t lived up to any kind of expectation. It’s just been years and years of not getting it done. So if they want change, if they’re (ticked) off, that’s fine. It’s not like we haven’t been searching for a way to satisfy our needs that basically satisfy their needs.

“We just haven’t got a job done. You don’t win over Buffalo fans by losing hockey games and putting up mediocre seasons. The last three years have pretty much been that.”

“I don’t even know what to say, just I’m sorry. This is just extremely disappointing.”

Interim Sabres coach Ron Rolston rarely showcases much emotion. But when Rolston was asked if the loss was disconcerting, he became visibly angry for the first time in his two months in charge.

“Of course it’s disconcerting,” Rolston told a reporter. “I mean, what kind of question is that? Of course, what, do you think I’m not concerned about it?”

He added: “Come up with another question.”

The Sabres had been playing well up until the first goal. Then Carl Hagelin’s innocent-looking wraparound ignited the goal bonanza.

Hagelin’s pass out front deflected off Sabres defenseman Adam Pardy with 1:18 left in the first period.

The rout was on.

Brad Richards’ pedestrian shot from the right circle deflected in off Sabres defenseman Christian Ehrhoff, the first of his three goals.

“It’s unexplainable. It’s inexcusable,” Ehrhoff said about the loss. “That’s just the way our season went, like it did tonight.”

Rick Nash made it 6-0 before the Sabres’ Cody Hodgson and Nathan Gerbe scored.

Ryan Callahan also scored for the eighth-place Rangers, who began Friday four points ahead of the Sabres.

Drew Stafford and Mark Pysyk, with his first NHL goal, also scored for the Sabres.

“You look at where we are in the standings,” Stafford said. “Even how bad everything was. So frustrating and miserable at times the year was. We still had a fighting chance. It’s easy to look back at games where (we) could have gotten points and stolen some games. It’s unfortunate that we put ourselves in a situation tonight.”

The Sabres have three games remaining.

“(Pride) is all we have,” Stafford said. “The character that’s in this room, there is no quit. Right now, the emotions of the game are tough to take. Now it’s just about being professional and having some pride.”

2 thoughts on “Shellacking from Rangers eliminates Sabres from playoff contention”