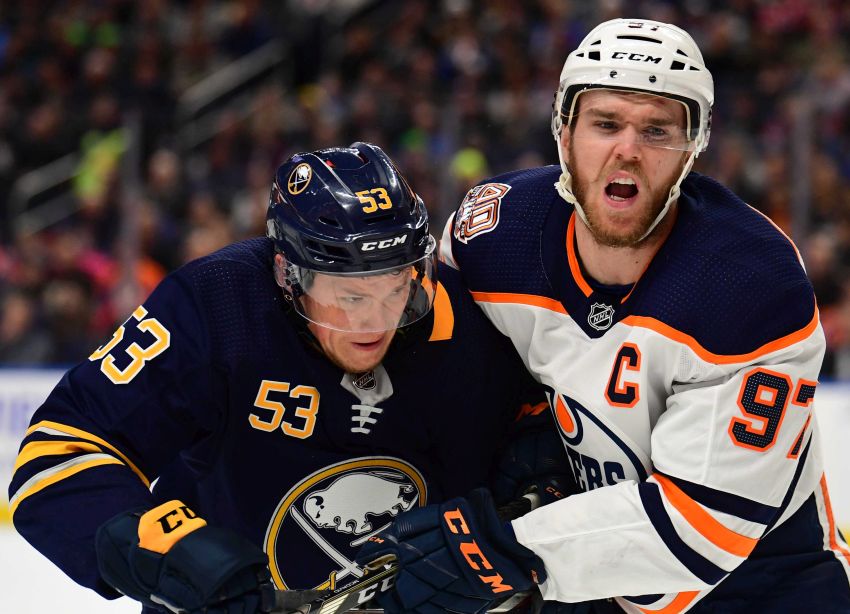 Pominville sensed a battle coming along the left boards, so he zeroed in on the puck. As he followed the play, he lost track of his man, allowing Darnell Nurse to slip past him from the point into the left circle.

“That was my bad,” Pominville said following the reeling Sabres’ 4-3 loss, their eighth defeat in the last 10 games. “Their D had movement, they made a play on the wall. … That’s definitely a play I’d like to have back.

“Great pass, great shot, but usually I probably wouldn’t be in the spot I was.”

In the span of 3:31, the Oilers scored three times, snatching the game from the Sabres.

Those type of meltdowns have become all-too-common during the Sabres’ current run of futility. One goal will suddenly snowball two or three over several minutes, costing them the game.

It also happened twice last week in Toronto during two losses to the Maple Leafs.

“It’s happened frequently where we just give up one and kind of go in a shell and can’t come out of it,” Pominville said. “Then we give up another one and it’s like, ‘Oh, here we go again.’ We’ve got to be better. It’s unacceptable.”

How can the Sabres prevent one goal from becoming a complete implosion?

Housley, of course, was miffed the Sabres blew a game to an opponent that has fired its coach and general manager this season.

“It’s just a little bit of defensive lapses for five minutes. It happened in Toronto (on Saturday), it happened tonight. These things we can correct. It’s just about picking up people.”

Following a weak start – Draisaitl buried Connor McDavid’s pass short-handed 1:28 into the contest – the Sabres seized control before the crowd of 17,775 inside KeyBank Center.

Captain Jack Eichel scored on the same power play and again later in the period, tying his career high of 25. In between, rookie center Casey Mittelstadt scored his 10th goal.

Even after the Oilers went up – Carter Hutton replaced Ullmark for the third period – the Sabres buzzed around goalie Mikko Koskinen late.

In the waning minutes, Pominville, who has been lethal around the net over his 14-year career, misfired a one-timer by blocking his own shot.

Yes, Pominville really hit the puck on his follow through as it headed into the net.

“I can probably take a hundred shots from that area and (it) might never happen but it happened tonight,” Pominville said. “It was clearly going in and just kind of double-touched it on my way back.

“It’s a tough feeling when you see it going in and then all of a sudden coming out.”

But to Eichel, the chances mean nothing. Neither does the Sabres’ late response.

“We showed some good compete and resiliency in the third period,” Eichel said. “But at the end of the day, like I’ve said this year, it’s not enough for us. When the other team gets two points and you get none it’s tough to hang your hat on a good effort or competing.

“It’s really just a league about results and winning. That’s what the most important thing is in my mind.”

Kassian, the Sabres’ first-round pick in 2009, has scored three of his 11 goals against Buffalo this season. The winger played 27 games with the Sabres in 2011-12.