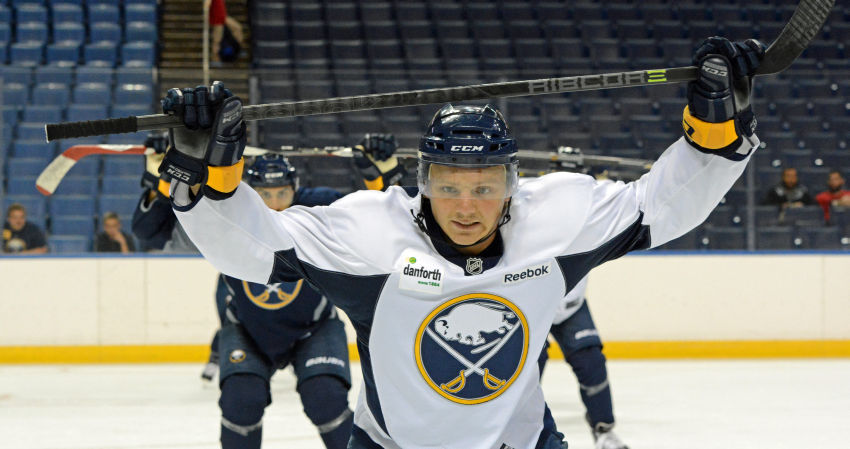 BUFFALO – The Sabres’ top two lines, while they could still be rearranged, appear to be set. So is the fourth line.

So four days before opening night, only the third line, which currently comprises center Johan Larsson and Zemgus Girgensons, Jamie McGinn and Sam Reinhart, a center-turned-winger, has a spare.

Reinhart, given his age, 19, and rawness – he has played only nine NHL games and is learning a new position – could be the odd man out.

“I see positives having those four guys together and competing for a spot on the opening-day roster,” Sabres coach Dan Bylsma said this morning following a nearly two-hour practice.

If Reinhart, the second overall pick in 2014, doesn’t earn a regular spot, don’t expect him to watch in Buffalo as a healthy scratch. Reinhart can be sent to the AHL freely this year. Bylsma would rather have the youngster play regularly with the Rochester Americans.

“For him to play 30 games here this year and be here the whole year, (it’s) probably not the best for his development as a player,” Bylsma said inside the First Niagara Center.

Naturally, Reinhart, who looked impressive at times during the preseason, wants to stay even if he’s the odd man out.

“I want to be here,” Reinhart said. “There’s no question about it. I feel I’m getting better every day. I feel the guys push me to do that.”

Meanwhile, the Sabres sent center Cal O’Reilly, who must clear waivers, to Rochester this morning.