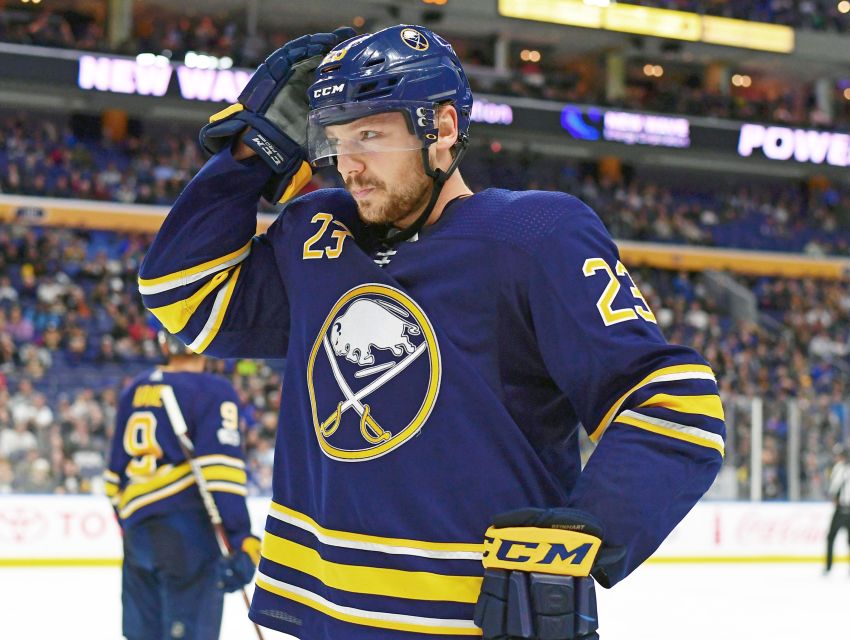 Sam Reinhart is on a pace for a career-low 16 goals. ©2017, Hickling Images, Olean Times Herald

The Sabres’ futility – they’ve lost nine of the last 10 games and have the NHL’s worst offense – has forced coach Phil Housley to constantly tinker, moving players all over the lineup.

“When you’re not winning, you’re trying to find the winning combinations,” Housley said Wednesday inside KeyBank Center. “We changed lines today, we might change lines tomorrow.”

No one has changed spots more than Reinhart, who has also spent significant time playing center this season.

For a little while, the Sabres seemed intent on keeping Reinhart at center, his natural position. Centers are a precious commodity. It was wise to examine Reinhart, the second overall pick in 2014, in the middle.

So Housley moved Reinhart, who compiled 40 goals over his first two seasons, mostly as a winger, to center during training camp.

With Eichel and O’Reilly entrenched at center, the Sabres’ old regime switched Reinhart to the wing as a rookie in 2015-16 so he could skate on the top two lines.

Reinhart stayed at center throughout camp and into the regular season before Housley moved him back to the wing. Reinhart briefly returned to his third-line center role earlier this month.

“It’s tough to get in a rhythm, for sure,” Reinhart said of changing positions. “It doesn’t help in that sense. I mean, I got to be prepared if I play multiple positions, right? I got to try to take advantage of that, but it’s been tough, for sure. Hopefully I can stick with it and … I can get familiar with (my linemates) again as quick as possible.”

But sooner or later, do the Sabres want to leave Reinhart at one position for good?

“It just depends on what the game’s going to bring us, especially with injuries that play a certain role in our lineup,” Housley said. “I thought he had some really good games at center, the production wasn’t there, he got back on the wing, he was getting some good looks. He’s just bouncing around a little bit until he finds a niche in the lineup on a line.”

Of course, Reinhart’s play hasn’t warranted him staying anywhere for long. He has five goals and 10 points in 25 games this season. That’s a 16-goal, 33-point pace over 82 contests.

Housley has often been complimentary of Reinhart’s performance at center. Still, it’s evident he’s at his best beside Eichel, his close friend and housemate.

Reinhart said he and Eichel “envy those opportunities” and “talk a lot.”

“We always seem to be on the same page,” Reinhart said. “We still expect more of ourselves. I think the biggest thing is when we are together we both have that mindset of we’re trying to make plays, and that’s when we’re playing at our best.”

But Reinhart has hardly been at his best. He feels he’s chasing the puck too much and can make smarter decisions. Clearly, he’s frustrated.

To Sabres winger Kyle Okposo, Reinhart’s still on the right path for success.

“I see him becoming a lot better pro, so I would just tell him not to lose faith and just believe in himself,” Okposo said. “He’s a heck of a player, he thinks the game better than a lot of guys in this league. He can play anywhere, he can play with anybody because he’s so smart. He’s just got to stick with being a pro.”

2 thoughts on “Sam Reinhart all over Sabres lineup”