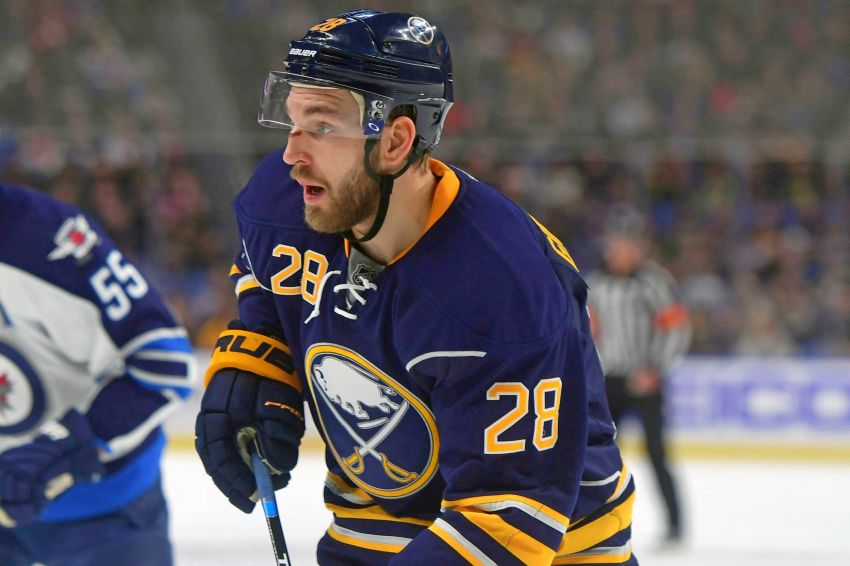 BUFFALO – Almost six minutes into the third period Saturday afternoon, Sabres forward Zemgus Girgensons kicked the puck along the boards and quickly headed to the net.

A second later, he knocked down Matt Moulson’s shot in front, skated across the crease and swept a backhander past Winnipeg goalie Connor Hellebuyck, the tying goal in the Sabres’ raucous 4-3 come-from-behind victory.

Then Girgensons, normally a calm presence, let loose with an emotional celebration, pumping his arms, yelling and banging the glass.

“I don’t have big celebrations usually, but I didn’t score at home for a while,” Girgensons said Monday. “It was a long time. I’ve been waiting to get that one at home.”

How long had the tenacious Latvian been waiting? Try almost two years. Incredibly, he hadn’t scored at home since Feb. 7, 2015, a whopping stretch of 57 games at KeyBank Center.

“He should’ve been jacked up,” said coach Dan Bylsma, whose Sabres host the Philadelphia Flyers tonight.

Girgensons, 23, scored 12 straight goals on the road, including one in last Tuesday’s 4-1 win against the New York Rangers, his fourth goal in three games at Madison Square Garden dating back to January 25.

So in his last 110 contests, Girgensons has scored one-third of his goals in one road rink.

Why does Girgensons, who has struggled for long stretches after his breakout 15-goal season in 2014-15, suddenly start scoring at MSG?

“It’s probably more coincidence than something else,” he said.

But Girgensons’ recent hot stretch, perhaps his best two- or three-week run in two years, hasn’t been a coincidence.

“It’s definitely been the best I’ve played in a while,” said Girgensons, who has three goals in the last seven games, as many as he had scored in the previous 38. “I feel pretty confident. I feel like I have my full energy. I just feel good out there.”

He added: “The past couple weeks … I started making more plays and holding onto the puck a little bit more, so I would say it’s a lot mental.”

Girgensons, who often scores pretty goals, has also responded to some terrific opportunities. The 2012 first-round pick spent the last two games as a winger beside top center Ryan O’Reilly.

“You see the battles he wins … he’s always competing first, he’s battling,” O’Reilly said. “He’s tough to play against. You watch him, you see the bounces he gets because he works so hard. You see the puck finds him.”

With center Johan Larsson out for the season, Girgensons could keep receiving consistent ice time on the top three lines. He played a season-high 16 minutes, nine seconds Saturday.

On Monday, Girgensons practiced as a center between Evander Kane and captain Brian Gionta.

As the Sabres bottomed out two years ago, Girgensons thrived as a top center under former coach Ted Nolan, who gave his players few restrictions on the ice. But Girgensons has often struggled under Bylsma, who has instilled much more structure than his predecessor.

A year after playing in the NHL All-Star Game, Girgensons scored only seven times in 2015-16.

The arrival of O’Reilly and center Jack Eichel last season also pushed Girgensons down the lineup and forced him to shuttle between forward positions.

“Everyone knows I can play both,” Girgensons said. “I feel comfortable playing both.”

“I think you’re just seeing a little bit more confidence in abilities in other areas.”