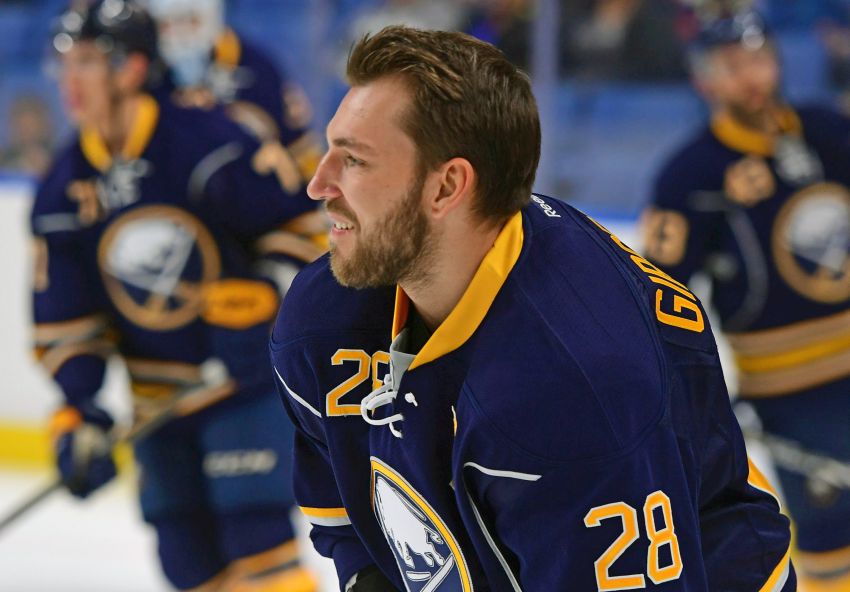 BUFFALO – Instead of dwelling on a season in which his offensive production plummeted and he struggled to find a role on the revamped Sabres, center Zemgus Girgensons said he’s “going all positive.”

“I’m not looking back,” Girgensons said Saturday following practice inside KeyBank Center. “It doesn’t matter what it was last year. It’s a brand new year, you start from all zeros. That’s how I look at it. I feel confident in myself and I can’t wait to get it going.”

So far, nine days into training camp, Girgensons has been playing center, a position he thrived at throughout 2014-15 under former coach Ted Nolan, compiling 15 goals and 28 points in 61 games.

But just weeks into last season, that breakout campaign – Girgensons was the Sabres’ No. 1 center and the NHL All-Star Game’s leading vote-getter as a sophomore – seemed like a distant memory.

When top centers Jack Eichel and Ryan O’Reilly joined the Sabres, new coach Dan Bylsma switched Girgensons to the wing, a position he played part of his rookie season.

The Latvian never responded to the move.

With less responsibility and ice time on a lower line, Girgensons often looked uncomfortable. He scored just once in his first 20 appearances and had a 23-game goal drought in the winter. He finished with only seven goals and 18 points in 71 contests. His shooting percentage dipped from 13 percent to 6.

Still, Girgensons believes he enjoyed some success. His rating, for example, improved from a minus-16 to even.

“I don’t think I had that bad a season besides the 18 points,” Girgensons said. “My plus-minus was 16 better than the previous year. That was a positive, of course, in my year. But there was definitely a lot of bounces that didn’t go in for me. I had plenty of chances to have the same amount of points.”

To Bylsma, Girgensons has taken “a positive from a negative.”

“It was hard year for him finding his role and finding his niche on the team,” Bylsma said. “I think that’s driven him to be a better player. He’s more determined right now, and determined to come back and prove where he fits on our team, what he can be for us.”

So where does Girgensons fit in the lineup?

He won’t be the first or second center with Eichel and O’Reilly around. Based on the line’s success late last season, the third trio of Marcus Foligno, captain Brian Gionta and Johan Larsson could stay intact early. Girgensons is too talented to skate on the fourth line regularly.

Girgensons has been the biggest benefactor of Eichel and O’Reilly missing time due to World Cup of Hockey commitments. Eichel joined practice Wednesday. O’Reilly could return Monday.

Girgensons has played between scorers throughout camp. He pivoted Matt Moulson and Tyler Ennis in Friday’s 8-1 preseason loss to Toronto. He practiced with Ennis and Kyle Okposo on Saturday.

“I think he works extremely hard, and he’s a lot more skilled than people say or people give him credit for,” Okposo said. “He’s just a smart player. His work ethic is awesome. He’s fun to play with.”

Girgensons, who signed a one-year, $1.15 million contract Sept. 1, could have a spot on the top three lines come opening night Oct. 12.

“I think now you’ll see us getting a little bit closer to what the top nine are going to look like, that position at center ice for Zemgus to be able to earn and play,” Bylsma said. “So right now, that’s where we envision him playing. But that’s also one we got to earn over the next 10 days.”