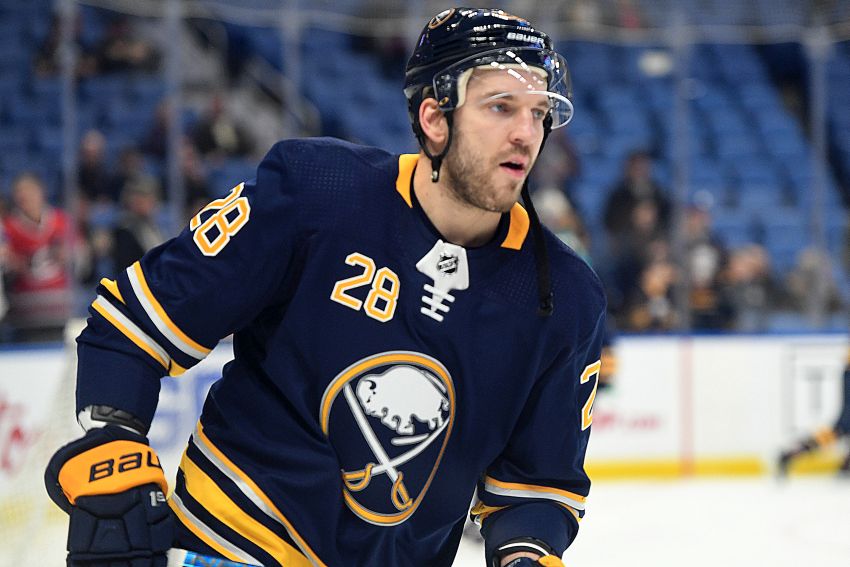 The other play, while not as memorable, was just as critical to the Sabres’ 4-3 overtime victory against the Los Angeles Kings. In the third period, Girgensons outraced Jeff Carter to negate an icing.

“It’s little details like that in a game that result in a big win,” Sabres goalie Carter Hutton said Wednesday of what he called the “turning point” in the game.

“If he doesn’t get up the ice and nullify that play … that play doesn’t happen,” coach Phil Housley said after the Sabres prepared for tonight’s tilt against the Arizona Coyotes at KeyBank Center.

It wasn’t surprising Girgensons enjoyed one of his best games this season Tuesday. In the Sabres’ previous outing, Saturday afternoon’s 6-2 loss to the Philadelphia Flyers, Housley scratched him.

“I think he was frustrated not playing the game before and he came out and was a difference-maker,” Hutton said.

In his sixth NHL season, Girgensons, 24, has become an occasional healthy scratch for the first time, sitting out three games.

“He’s swallowed his pride a little bit, but when he’s come back, he’s always had a great response,” Housley said.

Some of the scratches can be traced to the Sabres’ improved depth. But if Girgensons deserved one of the 12 forward spots every game, Housley would find a way to give him one.

“It (stinks) to sit out,” Girgensons said. “I think I’ve been playing well. We have a deep lineup, it happens. I don’t have that much to say about it.”

Of course, it wouldn’t be surprising if Girgensons, the 14th overall pick in 2014, stays in the lineup for the rest of the season. The former NHL All-Star possesses a work ethic few players can match.

“Everything he does is full-tilt,”Hutton said.

“That’s been one of my strengths since I came in,” Girgensons said. “I … rarely take days off. I think that’s why I’ve been here for the six years. I keep doing it.”

In his early days, based on his draft status and early production, Girgensons was expected to be a goal scorer.

But nearly 400 games into his career – right now, he’s at 376 – Girgensons has settled into a checking role. He has scored seven goals in each of the last three seasons. He usually skates on the fourth line beside Larsson. Evan Rodrigues joined them Tuesday.

“We’re pretty fast, we have a little bit of everything,” Girgensons said. “(Larsson) can be physical, I can be physical. (Rodrigues) is good with the puck, he sees the ice, makes plays.”

Their plays helped buoy the Sabres against the Kings, ending their five-game losing streak.

The Sabres’ secondary scoring disappeared during their skid. Only the first line of captain Jack Eichel, Sam Reinhart and Jeff Skinner scored in the four contests before Tuesday.

Girgensons has enjoyed this season more than any other. He endured a lot of losing in his first five years, never sniffing the playoffs. He said the Sabres’ recent 10-game winning streak was the most fun he ever had.

“The win streak we had,” Girgensons said, “it was a blast.”