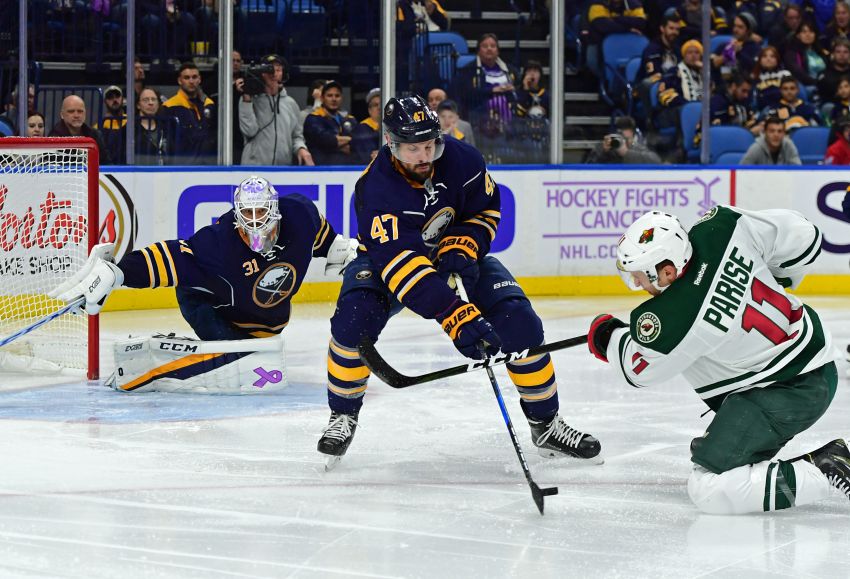 BUFFALO – When Zach Bogosian was informed he leads the NHL in fighting majors, the Buffalo Sabres defenseman responded with some self-deprecating humor.

Bogosian, of course, isn’t a goon. Over his first 10 seasons, he fought only 16 times, according to hockeyfights.com, an average of one scrap every 35 games. He hadn’t fought three times in a season since 2009-10.

But Bogosian has fought in three straight games after keeping his gloves on in his season debut in last Tuesday’s 4-1 road loss to the Vegas Golden Knights.

Still, Bogosian, 28, thrives on contact. When the Massena native is healthy, which hasn’t been much in recent years, he can be a slick-skating, physical presence.

Since returning from a lower-body injury he suffered Sept. 25, Bogosian has been one of the Sabres’ catalysts, showcasing an edge and providing some offense as they closed a five-game road trip with two wins.

“He brings a physical element,” Sabres coach Phil Housley said. “I’m not talking about just dropping your gloves, I’m talking about being hard to play against in front of our net and in the corners. But I like his offensive side of the game. He can jump in the play, he reads the play well defensively, his passing’s really good.”

In Thursday’s 5-1 loss to the San Jose Sharks, Bogosian blocked a career-high eight shots before fighting Joakim Ryan after the buzzer. In the second period of Saturday’s 5-1 win against the Los Angeles Kings, he fought Kyle Clifford and scored his first goal since March 27, 2017.

“I haven’t had that feeling in a while,” Bogosian said of scoring. “It was definitely a little bit of a monkey off the back. It’s been a while since I’ve seen the puck go in the back of the net. Definitely that was a good feeling.”

In Sunday’s 4-2 comeback victory over the Anaheim Ducks, Bogosian fought Ryan Kesler and recorded an assist.

“I hadn’t seen NHL-caliber speed in nine, 10 months, right?” Bogosian said. “But I felt better in San Jose, I felt better in LA, keep feeling better and better every game. There’s going to be times where there’s ups and downs, but I’m happy with how I started.”

Bogosian believes the fights are simply a product of the passion he plays with. The injuries – he has missed 119 games since the Sabres acquired him on Feb. 11, 2015 – have limited the physicality he can showcase.

“I haven’t played a lot of hockey, so I think that’s something that people maybe don’t see,” Bogosian said. “I’m not looking to do it all the time. It’s just kind of spur-of-the-moment, sticking up for yourself, your teammates is kind of what I’ve always done my entire career.

“How I look at it (is) I don’t just go out there looking … to fight every night. I want to play some hockey. I can help out while I’m on the ice.”

Bogosian also helps out off the ice. His teammates often talk about how he is one of the most popular Sabres in the dressing room.

“When he speaks, they listen,” Housley said.

Bogosian’s strong desire to overcome his run of injuries has earned him respect.

“I live close to him in the summer (in Minnesota) and I know how hard he worked,” Sabres winger Kyle Okposo said. “I know what he did for his hips, his groins, his body. To start the way he did, it would’ve broke a lot of people. He stayed with it.”

Okposo said the criticism Bogosian has received for being injured is “unfair.”

“People that don’t know him might not know his impact or how big a role he plays on our team, but we do in here,” Okposo said. “He’s a valuable piece of our team and we’re a better team with him in the lineup.”