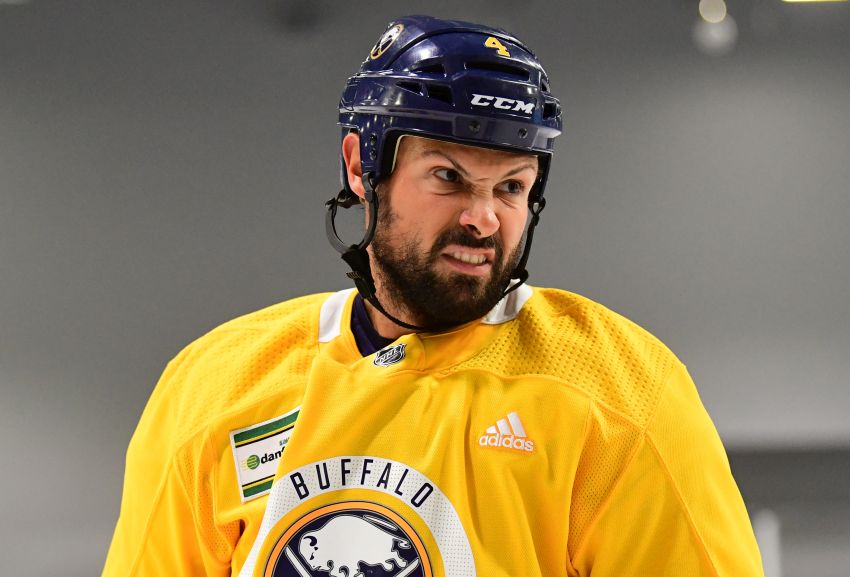 BUFFALO – Zach Bogosian wouldn’t get into specifics. For the past two weeks, including the Sabres’ first three games this season, a lower-body injury has sidelined the defenseman.

Bogosian refused to say if his current ailment is related to the season-ending hip surgery he underwent a year ago.

“Everyone’s going to speculate,” Bogosian said today after practicing with his teammates for the first time since getting hurt Sept. 25. “Left side, right side, hip surgery, non-hip surgery – I was out, and I’m making my way back.”

Injuries, of course, have stymied Bogosian, 28, over the years. Last season, he played only 18 games.

So the Sabres have dealt with Bogosian cautiously. Early in training camp, they held him out of some practices. Now, they’re bringing him back slowly.

“We’ve just been really cautious about Zach and where he is,” Sabres coach Phil Housley said. “(He had) a good progression skating on his own. Getting back in to practice is good sign.”

Bogosian hasn’t played since something “wasn’t feeling right” during a preseason shift, he said.

“Instead of making it worse and powering through, I’m trying to be smart about it,” said Bogosian, who’s officially day-to-day.

Bogosian would like to get a few more team practices in before he plays. He had been skating on his own with rehab coordinator Dennis Miller.

“There’s a lot of factors that go into it,” Bogosian said. “Obviously, today was a step in the right direction, but I’m not ready to play a game yet.”

The affable Bogosian has embraced a positive outlook on his career. He said he tries to contribute when he’s not playing.

“I don’t wish anyone to go through it. But I continue to grow from it.”

In other news, Housley said center Johan Larsson (lower body) and winger Vladimir Sobotka (upper body) both “had really good” practices today inside HarborCenter. Housley said a decision will be made Thursday.

Larsson hasn’t played since blocking a shot Sept. 26. Sobotka was hurt late in Thursday’s 4-0 loss to the Boston Bruins.

“It felt good,” Sobotka said. “Every day I get better and better.”

The Sabres host the Colorado Avalanche on Thursday, the end of a four-game home stand.