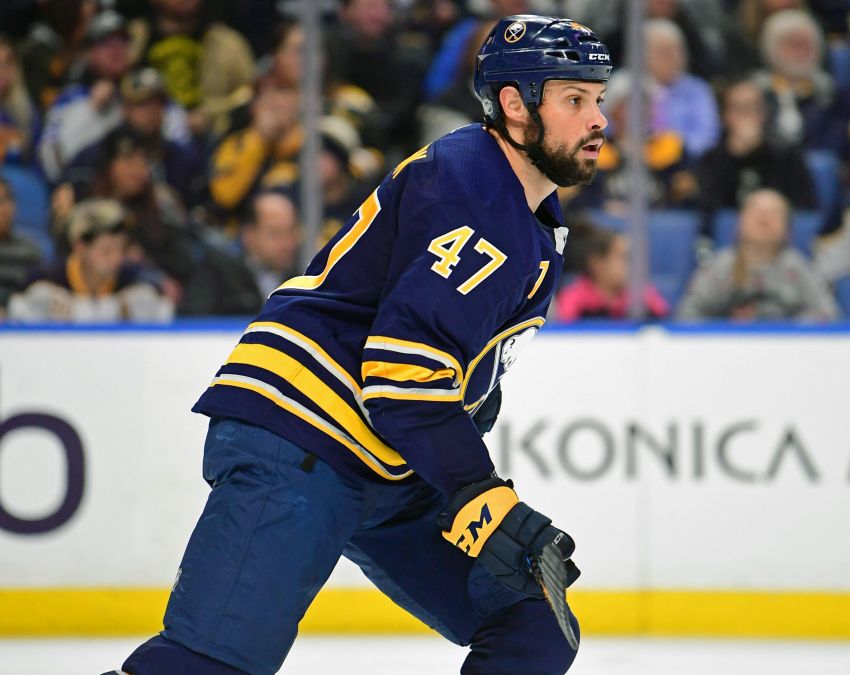 BUFFALO – Since the Sabres are off today, defenseman Zach Bogosian plans to enjoy some tranquility and go fishing, one of his passions away from the rink.

Bogosian, who loves bass fishing, said he finds a special peace in himself surrounded by the quietness on the water.

“I get away from everything, everyone,” Bogosian said prior to Saturday’s 3-2 preseason loss to the Toronto Maple Leafs inside KeyBank Center, his first game action since Jan. 9. “That’s my yoga.”

Every athlete, he said, does “certain things to get their mind off the game.”

“Every person deserves a little getaway from what they do for a living,” Bogosian said.

The affable Bogosian, 28, has had plenty to think about career-wise. Since the Sabres acquired him Feb. 11, 2015, he has missed a whopping 114 games – 42 percent of the team’s outings – to various injuries.

These days, after undergoing season-ending hip surgery in the winter, Bogosian feels the best he has in a long time. The Sabres eased his workload early in training camp, keeping him out of a few practices last week before he rejoined the sessions.

“It feels good,” Bogosian said. “I’m going to go through a training camp not really worried too, too much.”

A healthy Bogosian offers the Sabres an intriguing asset. At his best, he’s a speedy, tenacious defender capable of producing points.

But since 2013-14, the Massena native has averaged just 51 games a campaign. Last year, he played a career-low 18 contests, registering a single assist. After suffering a lower-body injury in the preseason finale, he played only five weeks before the Sabres announced he would have his hip repaired.

Injuries have cost Bogosian chunks of his prime years. When he has stayed healthy, he has often operated at less than 100 percent.

So could a fresh Bogosian showcase a new level this season?

“I think I’m working my way to get there,” Bogosian said. “Anytime you’ve been injured or been off for an extended period of time, it’s going to take a little while to get things back. I have a whole new level to bring. I can be a lot more effective than I’ve been in the past. I’m looking forward to the challenge that’s in front of me.”

“He hasn’t played a lot in the last two years, right?” Housley said. “We’re just making sure we’re cautious with his injury moving forward. We had those two first tough days (of camp)that really put a lot of stress on the hip, so just monitoring that. …

“He’s just got to keep the game simple. I know he’s got a lot of pride in his game, but I think just taking those steps forward and get himself in a game, get himself comfortable and then moving forward onto that.”

Bogosian skated beside Nathan Beaulieu on Saturday, a duo that could be the Sabres’ third pairing.

The Sabres dressed some of their biggest names, including defenseman Rasmus Dahlin and center Jack Eichel, against the Leafs. Winger Sam Reinhart, who signed a new contract Wednesday, made his preseason debut.

Housley awarded winger Tage Thompson, who scored a nifty goal Friday by toe-dragging, a spot on the top line beside Eichel and Jeff Skinner.

Thompson fought Andrew Nielsen after the defenseman hit him near the boards.

In Friday’s 5-3 loss in Toronto, Housley played defenseman Lawrence Pilut a game-high 25 minutes, 31 seconds, a surprising amount for the rookie.

“He was pretty savvy and poised with the puck, he was into the game, he made some really nice plays joining the rush,” Housley said.

The offensive-minded Pilut, 22, has a reputation for going all out. Of course, that aggressiveness – he had 38 points in 52 games in Sweden last season – sometimes gets him into trouble.

“Sometimes he gets a little bit antsy and tries to do too much with good intentions,” Housley said. “He’s just got to reel that in a little bit. But you can’t fault him for his effort.

The three-time 20-goal scorer signed a one-year, $650,000 deal after the Minnesota Wild exercised a buyout on the final season of his five-year, $23 million contract.

Ennis struggled in his only season in Minnesota, mustering only eight goals and 22 points in 73 contests.