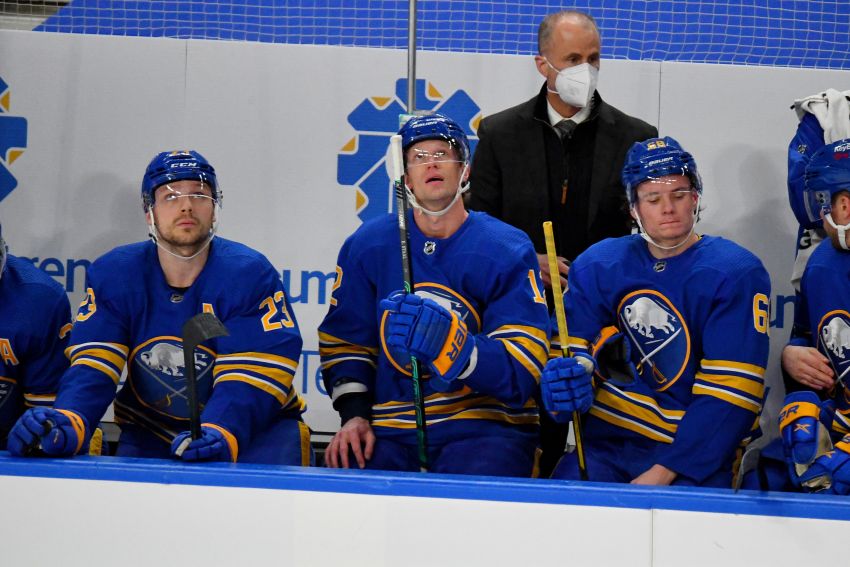 Then shortly after the Sabres departed the ice, the NHL announced this afternoon’s game against Boston at KeyBank Center was postponed because four more Bruins players were added to the league’s COVID-19 protocol-related absences list.

The NHL also postponed Tuesday’s Bruins game against the New York Islanders. Their activities have been paused until at least Wednesday.

The Sabres, who endured a rough two-week COVID-19 pause early last month, are worried. They played the Bruins on Thursday, losing 4-1.

For several hours Thursday, it was unclear if the game would be played. The Sabres postponed their morning skate after a member of their hockey staff entered protocol.

They learned at about 12:45 p.m. the game would be played. It appears now it should’ve been postponed.

Granato said the Sabres were deciding Friday afternoon if they would cancel today’s practice. He said they were leaning toward taking the day off.

The Sabres’ current situation feels eerily similar to what they experienced in late January, when they hosted the New Jersey Devils for a weekend series.

When the teams played Jan. 31, the Devils had six players in COVID-19 protocol, including forward Kyle Palmieri, who had played in the previous afternoon’s game.

Both teams did not play for another two weeks after that game.

“It’s interesting, a lot goes through your mind … because of six weeks ago,” Granato said on a Zoom call Friday. “We don’t have a lot of information yet.”

Nine Sabres players entered protocol in early February. Seven players and former coach Ralph Krueger, who was fired Wednesday, said they tested positive for COVID-19. Sabres defenseman Rasmus Ristolainen felt so weak battling the virus he struggled to walk up the stairs in his home.

The Sabres have lost 17 of their 19 games, including 13 straight, since their pause ended Feb. 15.

“I don’t see how it’s really much of a different situation that what happened with New Jersey,” said Sabres rookie Dylan Cozens, who tested positive for COVID-19 last month. “So there is definitely some nerves in the room. Like, we don’t want to get shut down again. That was not fun to have to quarantine and go through. I mean, we’re just hoping that it didn’t transmit to any of us. But we’re just kind of taking it day by day right now.”

Granato, whose Sabres are scheduled to play a road game Monday against the New York Rangers, needs to have meetings and practices.

The Sabres had a day off Wednesday. Then they couldn’t gather until 5 p.m. Thursday, just two hours before the game.

So Friday’s practice, which lasted about an hour, was important. It was faster-paced than Krueger’s sessions. The Sabres, whose sloppiness has contributed to their demise, worked on short passing drills.

“I saw more energy out there today,” Ristolainen said.

Krueger usually delegated instruction to his assistants. Granato, however, spent time at the white board showing his players what he wanted.

“I felt good about it,” Granato said of the session. “They did push and they need to push. That’s what we’re asking and I’m asking of them is more. The practice was designed that way and we’ll continue to try and tweak things to push harder and progress more. There were parts of the practice today that were in good in that regard.”

Cozens said the Sabres must “practice like we play.”

“You just got to keep those legs and just keep that intensity in practice so that as soon as that puck drops in the first period you’re good to go,” he said. “I think that’s one of the things we talked about.”

One thought on “Sabres worried about latest COVID-19 problems: ‘Definitely some nerves’”