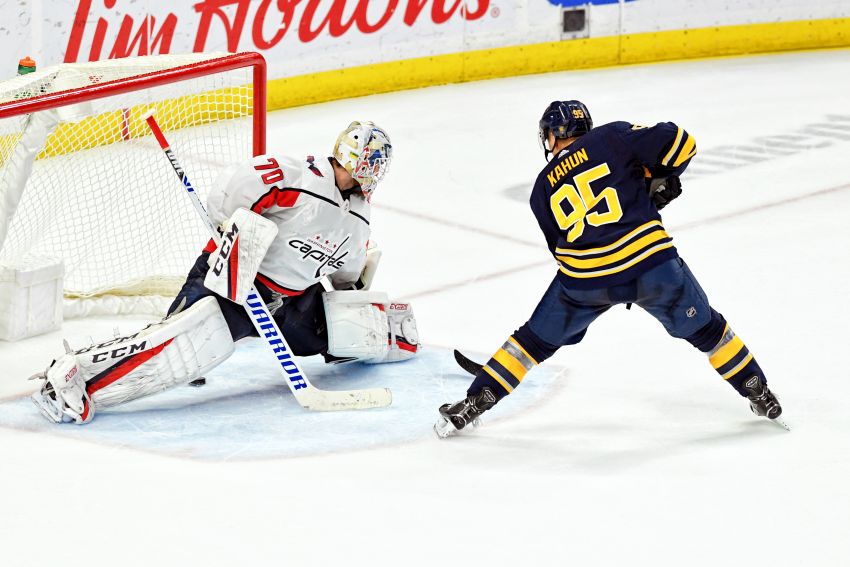 BUFFALO – Sabres winger Jeff Skinner tried to choose his words carefully when asked if he knows what constitutes goalie interference.

“I’m gonna get in trouble for that one,” Skinner said with a smirk after Monday’s 3-2 shootout win over the Washington Capitals ended the Sabres’ six-game losing streak. “I don’t know.”

Luckily, the questionable goalie interference call on Skinner that negated defenseman Brandon Montour’s goal with 2:48 left in regulation did not fluster the Sabres.

As the announced crowd of 16,539 kept howling in disgust long after the disallowed goal, the Sabres kept their cool.

Despite blowing a two-goal lead in the third period, there was a lot to like about Monday’s effort inside KeyBank Center.

But the second bizarre goalie interference call to go against the Sabres in less than a week could’ve cost them Monday.

Before Montour appeared to score, Skinner touched Washington goalie Braden Holtby as he came out to challenge the shot. Skinner, who was battling a defender, hardly interfered with him.

“It’s tight in there, there’s not a lot of space,” Skinner said. “I feel like he’s kind of trying to box me out or get my stick, and we were kind of going up against each other.”

Sabres coach Ralph Krueger did not challenge the call. If he lost it, the Sabres would’ve been stuck killing a delay of game penalty.

“Who knows what goalie interference is these days?” Eichel said.

Krueger did not hide his frustration over Monday’s disallowed goal.

“When something is outside the crease like that and it’s questionable, there shouldn’t be a call on the ice,” he said. “It should be called a goal and then they can go review it or not because it was a very, very, very soft, questionable call. We just don’t know what to call and not call.

“I thought we showed a lot of character in the group after the 2-2. They fight back, we get, for us, a clear goal and we stuck with it so I’m real proud of the guys to get the win here today. It’s been tough slugging here of late. We’re not getting anything for free.”

“If you look at what they do in other sports like in football, there’s a certain time where it’s just reviewed,” he said. “I think you can say, last five minutes of the game or whatever, game-deciding goal. It’s for me, the position that I’m in as a coach, to challenge that now would only put us shorthanded late in the tail end of a game, there’s no way you can challenge that anymore because you just feel no confidence in the calls.”

The Sabres should generate some confidence from Monday’s victory. If Eichel and Ullmark can get rolling, perhaps they can rattle off some wins down the stretch.

“(Jack) just looked a lot more comfortable today,” Krueger said. “I think he’s let go of some of that pressure that he was feeling and he’s sharing it with the team and as a result just a really strong game from him today.”

Ullmark, who has emerged as the Sabres’ backbone earlier this season, said his time away injured was “quite boring.”

Skinner said of Ullmark: “He made some big saves. I thought he had great, great rebound control, which is big, especially against this team. … He was real calm all night. Obviously, in the shootout he was huge.”