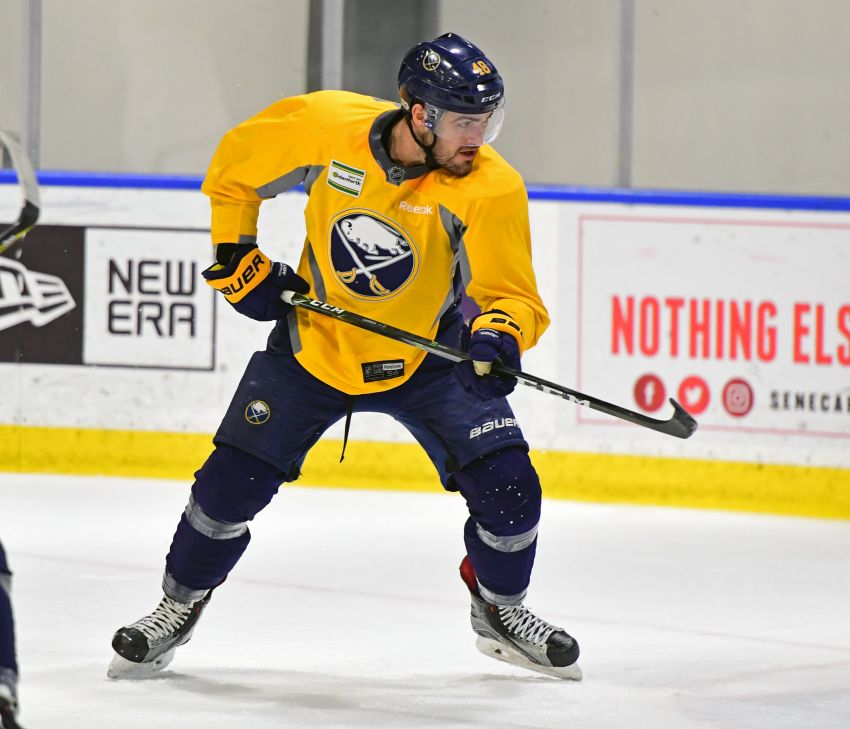 BUFFALO – William Carrier couldn’t resist. So before answering a question Thursday, the excited Sabres rookie greeted a crowd of reporters with a short opening statement.

“I’m back, everyone,” a smiling Carrier said inside HarborCenter.

Carrier, sidelined 24 games by a bone bruise in his knee, wasn’t the only injured player back Thursday. Sabres winger Kyle Okposo and defenseman Dmitry Kulikov also returned to practice.

All three are on track to play Saturday at home against the Toronto Maple Leafs, coach Dan Bylsma said.

The biggest name, of course, is Okposo, who has missed 10 contests since hurting his ribs. His 43 points led the Sabres when he was injured March 2.

“We missed a ton with Kyle not in our lineup,” Bylsma said. “We missed a guy, at the time he was injured, the leading point-getter on our team, his presence offensively for our team on the ice.

“But I think even more (it’s) just the leadership he’s shown that we missed.”

Without Okposo, the Sabres have struggled mightily, going 3-6-1.

“There’s a lot of things here that I think we can get better … so that time away, it’s just frustrating because I want to grow with this team and help this team grow, too,” Okposo said.

Okposo, 28, said he was injured on “a weird play” against the Arizona Coyotes. As he tried to fish the puck out of his skates in the neutral zone, he saw an opponent lining him up. Sure enough, he was knocked into the boards.

“I didn’t angle myself correctly to where I could brace for it and I just folded over, ribs went right into the boards,” Okposo said.

Still, Okposo, who was in noticeable pain on the bench, stayed in the game. On his next shift, a power play, he tried one-timing the puck.

“I absolutely fanned on it,” he said. “I knew I was in trouble when that happened.”

Okposo experienced a difficult recovery early on. He couldn’t exercise for the first 12 days.

“It’s really frustrating because you don’t move,” he said. “I can’t pick my kids up. That’s part of it, it’s tough.”

In the end, Okposo returned sooner than he expected.

“We turned the corner pretty quick and (I) was able to start working out,” he said.

“When you watch the game, it’s easy,” he said. “If I’m watching the game, I could score 50 goals in the stands. Like, it’s just easy, you know? But when you’re playing, it’s a little bit more difficult.”

Okposo skated beside Ryan O’Reilly, his center most of this season, and Tyler Ennis on Thursday.

Meanwhile, Carrier, 22, was starting to establish himself as an NHL regular when he left the lineup Feb. 4. The gritty winger said he suffered the bruise hitting an opponent three weeks earlier, then did more damage playing with the injury.

“(It was) probably a tough time for him, having finally made it to the National Hockey League and playing on a regular basis, and then kind of out of the blue you’re out for a couple months, not even knowing how long you’re going to be out,” Bylsma said.

“They were just scared of it getting worse, and they were scared of me keeping pushing on it,” Carrier said. “And the way I play, I play physical and all that, it just kept getting worse and worse until I couldn’t play anymore.”

Carrier said he suffered a setback two weeks into his recovery and had to use crutches again.

“Knowing myself, I probably went a little too hard on the ice the first two sessions,” he said.

Kulikov hasn’t been 100 percent all season. The lower-back bruise he suffered in his preseason debut has constantly dogged him. Then he went down again March 4.

If the Russian plays Saturday, it will only be his 40th appearance.

Another defenseman – Justin Falk, Taylor Fedun and Cody Franson are all hurt – could return before Saturday, Bylsma said.