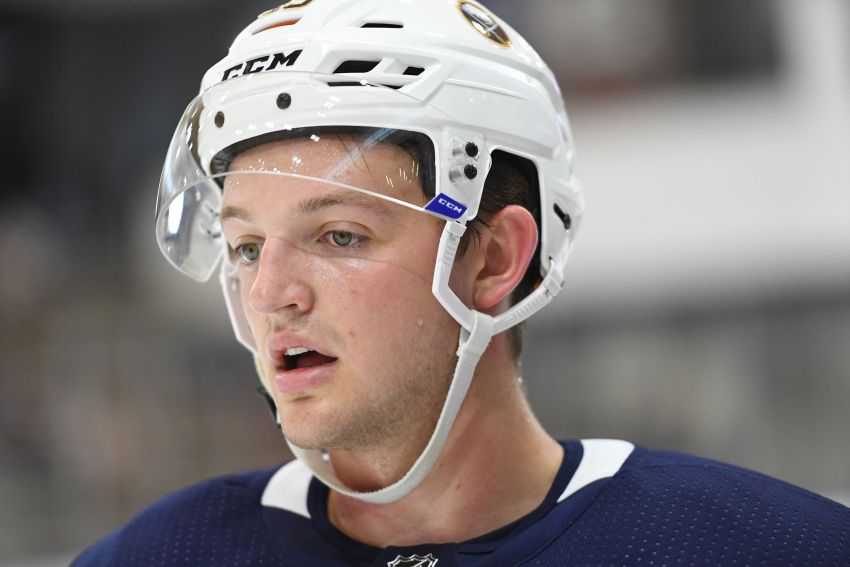 BUFFALO – On the ice, Sabres defense prospect Will Borgen often looks like a beast, throwing his 6-foot-3, 195-pound frame around and rattling opponents.

Borgen showcased his physicality throughout Friday’s 6-4 win inside noisy HarborCenter, throttling some New Jersey Devils and drawing their ire in the Prospects Challenge opener.

“He really enjoyed it,” coach Chris Taylor said. “Obviously, the fans brought that out for him. They were cheering for him, the big hit.”

To Taylor, Borgen “relishes that role.”

“We need him to continue to do that, get underneath the skin of their top players,” he said.

But off the ice, Borgen is “a laid-back type of guy,” Taylor said.

“He’s easygoing,” he said. “Sometimes those guys, it’s weird that (they’re) so easygoing off the ice.”

Borgen, 21, said he has always had that type of personality.

“They always say I’m quiet and stuff,” he said.

Borgen, a fourth-round pick in 2015, 92nd overall, lets his play do the talking.

While first overall pick Rasmus Dahlin, Borgen’s rookie camp partner, and Brendan Guhle garner most of the attention among Sabres defense prospects, Borgen is expected to play in the NHL someday.

The Minnesota native morphed into one of the NCAA’s top defensemen at St. Cloud State University. His fine play as a freshman in 2015-16 caught the eye of Team USA, which named him to its World Junior Championship squad.

Last season, he earned a spot on the Olympic team for the Pyeongchang Games, although he did not dress for any contests.

“It was awesome,” he said of the Olympic experience.

By late March, Borgen was beginning an eight-game AHL run on a pro tryout with the Rochester Americans. The three-year, entry-level contract he signed kicks in this season.

“I think I was just ready,” Borgen said of turning pro after his junior season. “I had my three years at college, and it was the best time of my life. I loved my team, I loved playing at St. Cloud, but I thought I was ready to take the next step.”

Right away, Taylor, who coaches the Amerks, noticed Borgen’s composure.

“As a young defenseman, you don’t know what you’re going to get coming into the American Hockey League, because it’s not an easy league,” Taylor said. “I thought he was actually composed with the puck, he made some big plays, he was simple. …

“He’d make that big hit … and it surprised a lot of guys. I like his toughness. I like his willingness to get in there and battle. Honestly, he needs to get a little bit stronger boxing out, but that’s going to come with maturity.”

While Borgen loves to hit, he tries to pick his spots.

“It’s just part of my game, I like to be physical,” Borgen said. “I don’t do it all the time. I can find spots to have an open hit. … Most of my coaches that I’ve had have always wanted me to finish my checks. It’s always been a part of my game.”

It’s an asset that impressed the slick Dahlin, who can freewheel with Borgen back serving as an anchor of sorts.

“He’s so easy to play with, he talks a lot,” Dahlin said.

Borgen said of Dahlin: “He’s so smart on the ice, he knows what to do with the puck, he knows how to get open and talks to me. I think overall (it’s) easy to play with him because he’s always in the right spot and really good with the puck.”

The Sabres play the Boston Bruins tonight in the second game of the rookie tournament.