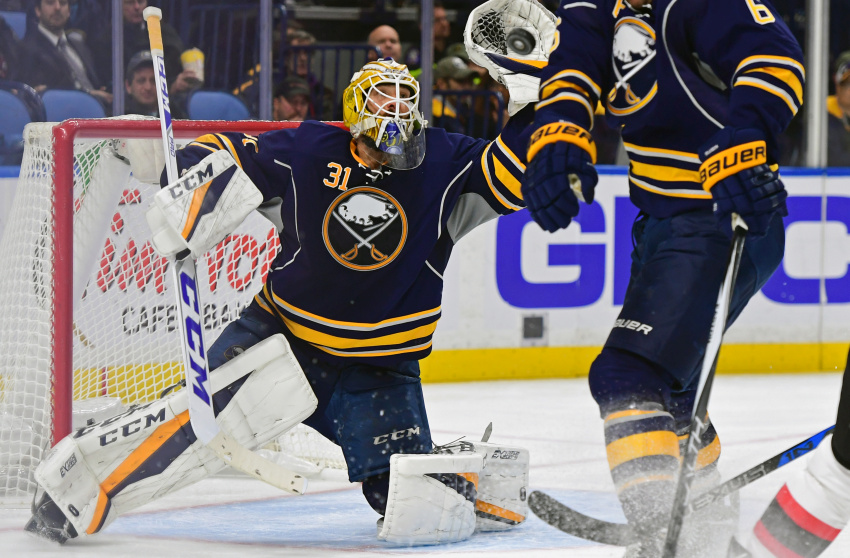 BUFFALO – The Sabres have lost a lot of games in the past three-plus seasons – 176, to be exact – so they’ve experienced about every kind of defeat imaginable.

So, yes, an overtime penalty shot has victimized them.

But a high-scoring forward scored that goal on the road. How about a defenseman with 37 goals in 11 seasons doing that on your home ice?

That happened in Friday’s 2-1 loss to the New Jersey Devils, a contest clinched by Andy Greene’s penalty shot 29 seconds into overtime.

“A blind squirrel finds a nut every once in a while,” joked Greene, who slid a shot between goalie Anders Nilsson’s legs. “Make sure I don’t fall and get a decent shot.”

Greene couldn’t get off a decent shot on his partial breakaway because Sabres winger Evander Kane interfered.

Based on the reaction to the call, the Sabres and the crowd of 18,301 fans inside KeyBank Center expected Kane would be called for a penalty, not a penalty shot.

“Didn’t expect to see it,” Sabres coach Dan Bylsma said. “It was a penalty.”

But Bylsma has seen it before. Brad Marchand scored a penalty shot winner Feb. 6 in Boston.

The Sabres don’t have much to show for their six home games this season. They’re 1-3-2 with and have scored only seven goals.

Like in Wednesday’s 2-1 shootout loss to the Ottawa Senators, the Sabres scored early and couldn’t hold on.

Matt Moulson put the Sabres up 10:34 into the game, scoring his fifth goal – all have come on the power play – and first in nine games.

For about 30 minutes, it appeared the Sabres could eke out a tight win. In his fourth appearance and first since posting a shutout Oct. 29, the 6-foot-6 Nilsson looked sharp, gobbling up everything.

But a string of penalties toward the end of the second period, including a four-minute high-sticking call to Kane, stymied the Sabres’ momentum.

“They got momentum, obviously, from that,” Bylsma said. “That’s where their game is at. We did a great job of killing those off … and gave us a chance to win the game.”

Yohann Auvitu’s weak wrist shot from the left point beat a screened Nilsson, 3:13 into the third period, ending the backup’s shutout streak at 119 minutes, 46 seconds. Nilsson said he saw the shot but lost it late.

Nilsson, a career backup, has quietly been a big contributor to the Sabres in limited action. His .942 save percentage ranks eighth among goalies with at least 120 minutes played and his 1.96 goals-against average ranks 11th

“Played a great game, played strong again and gave us a chance to win a game,” Bylsma said.

Moulson said: “He’s been pretty unbeatable in practice for a while now. There’s a guy that works extremely hard in practice, competes on everything. It’s no surprise that it transfers over to the games.”

So Nilsson versus Greene, who said he last had a penalty shot in college, might’ve seemed like a mismatch. Nilsson said Greene wasn’t difficult to handle because his tendencies aren’t known.

“I’m not trying to think about who’s coming that much,” he said. “I’m trying to read the play as it develops. … I thought I had him covered … but somehow it slipped under my pad.”

Greene said: “(I tried to) make sure I don’t fall and get a decent shot off and I was thinking about going blocker there, he took it away and try to sneak it five hole and luckily it went in.”

The Sabres play again tonight in New Jersey, a game No. 1 goalie Robin Lehner is expected to start.

“It wasn’t like he went into the game feeling the injury,” Bylsma said. “It wasn’t a battle through it. It felt fine to go.”