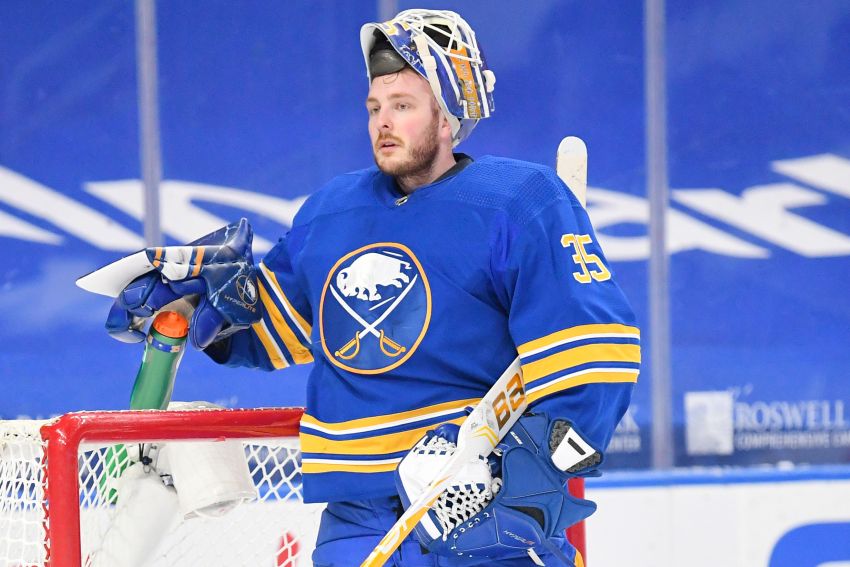 In his third full NHL season, goalie Linus Ullmark has emerged as the Buffalo Sabres’ MVP and backbone. When a lower-body injury sidelined him almost a month earlier this year, they lost 15 straight games.

Their three other goalies this season – Carter Hutton, Jonas Johansson and Dustin Tokarski – have a combined record of 1-19-3!

The Sabres sorely need to re-sign Ullmark, who can become an unrestricted free agent following the season.

“A priority for us is absolutely to sign Linus and he and his agent both know that,” Sabres general manager Kevyn Adams said on a Zoom call Monday.

The Sabres, of course, couldn’t risk dealing Ullmark, 27, before Monday’s trade deadline. Right now, they have don’t have another goalie in the organization ready to be an NHL starter.

Top goalie prospect Ukko-Pekka Luukkonen, 22, has struggled following the Rochester Americans’ recent COVID-19 pause. After allowing five goals and getting yanked from Saturday’s 9-2 loss to the Cleveland Monsters, he has compiled a 3.60 goals against average and an .888 save percentage in 14 games this season.

“We said all along we want Linus to be a Buffalo Sabre and we really feel good about where his game is at,” Adams said. “We’ve had great conversations. Been ongoing. Continue to talk right now. I’ve spent time with Linus just one-on-one having conversations about philosophically where we’re at and where we’re looking to get to and what he’s looking for. That’s my style.

“I think that’s an important relationship to have with your players. It’s not about dollars and cents. It’s more about vision and where are we headed and why. We’ve had those conversations and we’ll continue to work at it.”

2 thoughts on “Sabres want to re-sign goalie Linus Ullmark: ‘A priority for us’”