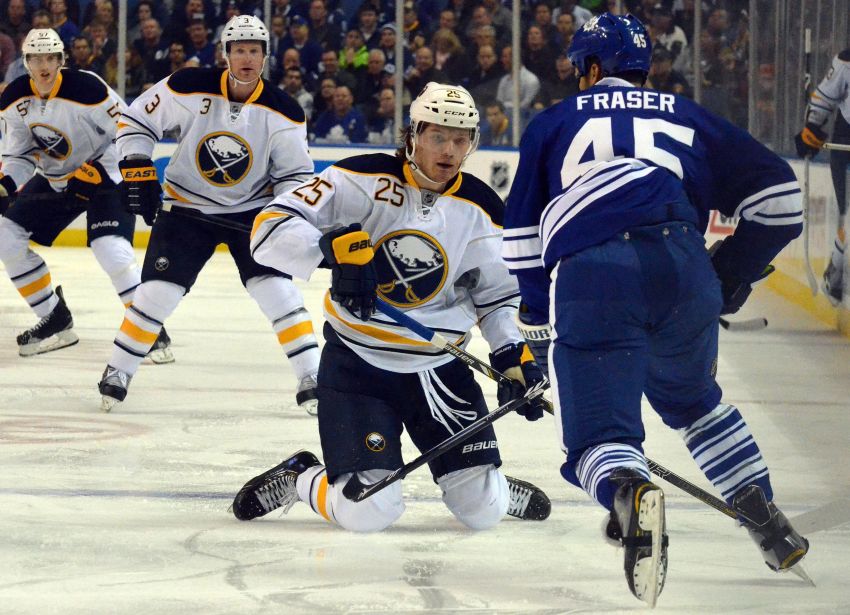 The Russian center practiced Tuesday inside the First Niagara Center and traveled with the team to Boston for tonight’s tilt against the Bruins. But Grigorenko will likely be scratched.

Rather than sending Grigorenko to AHL Rochester, where he’s now eligible to play with the Quebec Remparts’ season having ended last week, the Sabres want to “put him in this environment against our guys and see where it takes him,” interim coach Ron Rolston said.

“Now he’s got to come back here and earn what he gets,” Rolston said.

Following a scorching postseason start, Grigorenko cooled off considerably. He had three goals and 12 points in a six-game opening-round win. But he mustered only two goals and two points in the Remparts’ five-game second-round loss.

Grigorenko said he’s glad he went back to junior and played big minutes. He had been a regular healthy scratch in Buffalo.

With Grigorenko back, the Sabres have two extra forwards. Could Luke Adam, a recent healthy scratch, get sent back to Rochester?

“We still have to discuss that,” Rolston said.

Rolston said he hasn’t decided whether Ryan Miller or Jhonas Enroth will start in goal tonight.

Enroth won consecutive starts over the weekend while allowing only one goal. The backup has terrible career numbers – 0-3-2, 4.00 goals-against average and .888 save percentage – against the Bruins, however.

The 24-year-old has never started three straight games for a healthy Miller.

“I would normally just go with your gut feeling on it and how guys are performing at that point more than (the) history of it,” Rolston said.

Ruff, fired by Regier on Feb. 20 after 15 seasons as Sabres coach, led Canada at the 2009 world championship, winning silver.

Update: Adam has been sent back to Rochester.