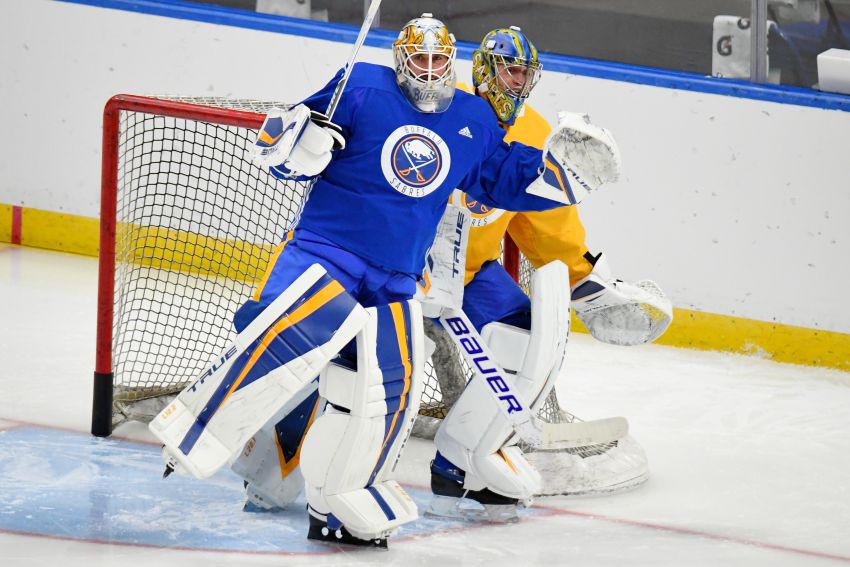 Johansson even played against the Pittsburgh Penguins, a heavyweight team Hutton has dominated over his eight-year career.

With starting goalie Linus Ullmark injured, the Sabres wanted Johansson, a third-round pick in 2014, to experience a heavy NHL workload.

“It was good for him to see a few games in a row and also to see different opposition and get used to that, playing on the road, playing at home, dealing with everything that it takes to be a goalie in the National Hockey League,” Sabres coach Ralph Krueger said on a Zoom call Friday. “I know he’ll come out richer for this experience.”

Johansson, 25, lost all three games, posting a 3.93 goals-against average and an .864 save percentage. Still, the Swede, an AHL All-Star with the Rochester Americans last season, liked being thrown into the fire.

“This is a pretty tight schedule, but I like the challenge,” Johansson said Friday. “I feel ready for it. I feel strong and capable of doing it. It’s a good test. … I’m embracing it. I’m liking it.”

Despite some struggles this season, Johansson possesses a strong upside. He could have a future with the hapless Sabres, who have lost 10 straight games entering tonight’s contest against the Washington Capitals at KeyBank Center. The graying Hutton, 35, likely won’t be re-signed following this season.

Hutton, who played in Saturday’s 3-0 loss to the Penguins, understands why the Sabres want to examine Johansson.

“I’ve been the guy that was getting games over a guy too, right?” said Hutton, who stopped 31 of the 32 shots he faced Saturday. “So I take it as it is. I’m a pro and I’m gonna support J.J.”

Johansson said he enjoys the relationship he and Hutton have developed over the past year.

“Hutts has been just terrific,” said Johansson, who played his first six NHL games last season. “I love being a goalie partner with him. He’s an experienced guy, funny guy. He makes me feel confident and feel good. He supports me and I support him. I think we go really well together and I enjoy working and playing with him. I think he does the same with me. It’s just positive being with Hutts.”

Hutton said he has been “pretty clear” in relaying his expectations to Johansson and assistant coach Mike Bales, who’s in charge of the goaltenders.

“There’s times where, of course, I want to play and I’m gonna show that,” Hutton said. “I’m not going to pout, I’m just going to come back to work and work harder and when I do get a chance to play, try to show that I’m competing and ready to play.”

Krueger said the Sabres planned to split goaltending duties against the Penguins and “evaluate out of that.”

So Hutton, who owns an awful 1-8-1 record this season, could earn more playing time. He looked sharp throughout Saturday’s game, his first start in a week. The Sabres play four times this week, including a road game Tuesday against the New Jersey Devils.

Johansson looked shaky while stopping 24 shots in Thursday’s 5-2 loss, allowing a soft breakaway goal to Brandon Tanev. He was also deep in his net when Jake Guentzel converted Sidney Crosby’s pass from behind the next from the left circle.

Long before Friday’s practice started, Johansson was on the ice with Bales, Hutton and Sabres center Curtis Lazar working on a similar situation.

“We took the opportunity today to grow with that,” said Johansson, who has a 0-4-1 mark in six games this season. “Take those moments when we have them to grow and be better.”

At the same time, Johansson knows he can’t let subpar outings torment him.

“It’s important to analyze the game and then just let it go,” he said. “Take the positives with you, take the learners with you and when we have the opportunity to practice on the ice – whether it’s a morning skate or a practice day like today – just be really sharp and do what I need to do to be prepared.”