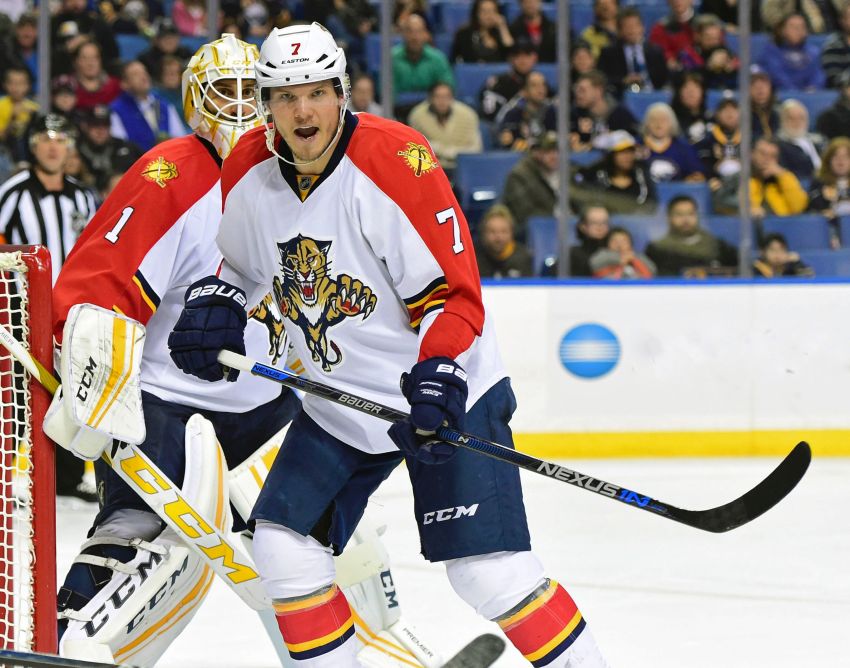 BUFFALO – In acquiring Dmitry Kulikov from the Florida Panthers on Saturday morning, the Sabres added the versatile, left-handed defenseman they coveted and filled perhaps their biggest need.

“We have a need for a left-shot D,” Sabres general manager Tim Murray said after the NHL Draft ended.

There are, of course, other holes, including up front, where the Sabres must add more scoring, either through trades or free agency.

“The best that are available at any position I’m going to listen to,” Murray said inside the First Niagara Center. “We have holes. But we’re going to chase the big fish.”

The Sabres, in fact, plan to chase the biggest fish, Steven Stamkos. If the Tampa Bay Lightning captain hits free agency Friday, he would become perhaps the most coveted player on the market ever.

At midnight Saturday, teams were allowed to start talking to potential free agents. While the Sabres haven’t contacted Stamkos’ camp yet, they plan to ask his representatives soon if the two-time 50-goal scorer has any interest in Buffalo, Murray said.

“I have to ask that question,” Murray said. “I wouldn’t be doing my job if I didn’t.”

Murray said he has no sense if Stamkos, 26, is interested. His contract would be massive, maybe the largest ever – seven years at perhaps $11 or $12 million per – but the Sabres have the salary cap space.

The team’s rabid fan base is already becoming infatuated with Stamkos.

After a member of the Lightning’s staff dropped the team’s draft strategy sheet at a local hotel Friday, someone found it and tweeted it out. When the team asked that the tweets be deleted, the person replied they would as long as Stamkos signs with the Sabres.

Sabres coach Dan Bylsma said he was constantly asked about Stamkos on the golf course in the spring. Sometimes people even screamed to him about Stamkos out their windows.

“I always asked them, ‘What should we sign him for, how much do we offer him?’” Bylsma joked. “But there’s a lot of buzz about that, but frankly it’s a lot of talk and a lot of rumors at this point in time.”

For now, fans will have to be happy with Kulikov, who will almost certainly skate in the Sabres’ top four.

“One of the biggest, pressing needs for our team is a left-shot, puck moving defenseman,” Bylsma said. “I think we were able to get that.”

The Sabres’ pursuit of Kulikov, 25, started more than two years ago, Murray said. He first inquired about the Russian when he took over as GM early in 2014.

Then about two weeks ago, Murray started asking again. The Sabres’ decision-makers scouted Kulikov’s playoff performances on video and liked what they saw.

“He had an outstanding playoff for them,” Murray said. “I thought he was their best D.”

The Sabres paid a hefty price, trading defenseman Mark Pysyk, 24, to the Panthers. The teams also swapped picks, with the 38th and 89th selections Saturday going to Florida for the 33rd pick, which the Sabres used to select Swedish center Rasmus Asplund.

“Mark is a very good player,” Murray said. “Mark is kind of an analytics darling, and we know that. So we knew there’d be a little pushback on that.”

“I think he’s excellent defensively. He’s not offensive, but I think he has a little more to give.”

Kulikov gives the Sabres three lefties and three righties – a balance they wanted – on the blue line.

“I think the left shot was a big deal,” Bylsma said.

Kulikov has one year and $4.5 million left on his contract.