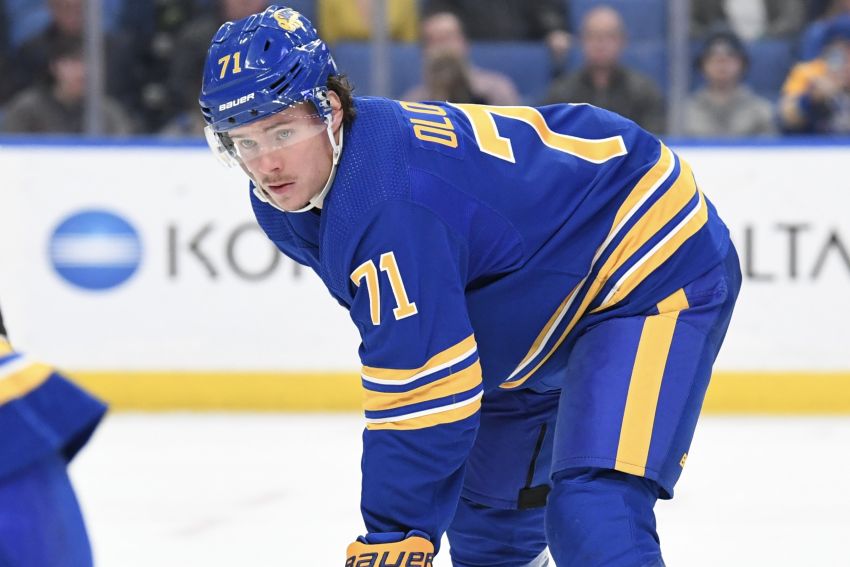 BUFFALO – Since he arrived in the NHL three years ago, the knock on Sabres winger Victor Olofsson has been he’s too one-dimensional, just a shooter who mostly scores power-play goals.

Olofsson, 26, possesses a lethal shot, and he has often utilized his ultra-quick release to pile up power-play goals from the circle.

Olofsson believes his newfound five-on-five scoring prowess illustrates growth during a difficult and odd season. Considering he injured his wrist and endured a stunning 30-game goal drought, reaching the 20-goal mark for the second time would qualify as a notable achievement.

“I feel like I’m a more complete player,” Olofsson said following Friday’s practice at KeyBank Center. “I feel like I’ve taken steps this year without the puck, even with the puck. I feel like I’m creating more now five-on-five and I think that was, my previous years, probably my biggest issue that I didn’t really produce as much five-on-five, scored most goals on the power play.”

Olofsson enjoyed a torrid start this season, scoring five times in his first eight outings. Then the wrist injury sidelined him eight games. When he returned, his shooting, his greatest asset, wasn’t the same.

“I definitely had a great start before my injury,” Olofsson said. “I feel like I played some great hockey and then I had a tough time coming back after that.”

Instead of instantly unleashing the puck, Olofsson often massaged it, and that split-second let the goalie catch up and set himself.

“Think of some of the greatest skaters in the game, speed’s their asset, but they’re trying to play with a pulled groin,” coach Don Granato said after the Sabres prepared for tonight’s home game against the Philadelphia Flyers. “Their life is miserable, they can’t do the things they can do, and that was what was hampering Victor, his bread and butter is shooting the puck.”

Incredibly, after scoring Oct. 31, Olofsson did not record his sixth goal until Feb. 15.

“He had an injury, we didn’t disclose it, we disclosed it as an upper body to save him, obviously, being targeted when he did return,” Granato said. “But it took him lots, a bulk of games, 20 or more games, before that wrist was back to normal. When his scoring started, that meant his wrist felt better. He can shoot the puck the way he shoots the puck.”

Olofsson has been on a tear for two months, compiling 13 goals and 20 points in his last 28 games. Overall, he has recorded 41 points this season, just one short of his career high he set as a rookie in 2019-20.

“I feel like the last couple of months I’ve been really feeling better and the goals are really starting to come,” Olofsson said. “I feel just better in every aspect of the game, so when I look back after the season I’ll still feel like I can hopefully be proud of what I’ve done even if I for a long time didn’t score and produce.”

Granato credits Olofsson for pushing through his rough stretch and figuring out other ways he could create offense and be an asset.

“That’s why I felt comfortable he’s going to come out of this a better player,” Granato said. “This adversity is actually going to force him to look within himself and look for other ways he can make himself a better player now that he can’t shoot a puck, and he did that.

“And so now we’re seeing that combined with his shooting, and he’s a better player, he’s a better five-on-five player as a result. So the injury, there was a silver lining to that injury, that I think is worth noting, and it’s a credit to him to push through that.”

Olofsson said: “I look at myself as an offensive player and I want to produce, score goals and points and I didn’t do that for a while during the season. It was obviously frustrating but I feel like it’s something I can look back to and learn from it.”

Olofsson, who has recently been skating at right wing beside center Casey Mittelstadt and Rasmus Asplund, practiced on the top line Friday with center Tage Thompson and Jeff Skinner.