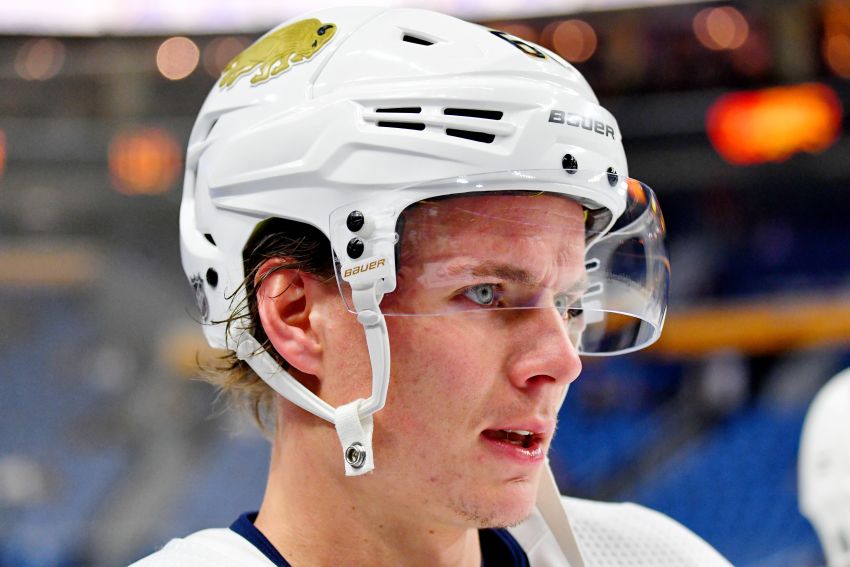 As the 181st overall pick in 2014, Buffalo Sabres winger Victor Olofsson faced long odds to play in the NHL.

For some perspective, consider the Sabres drafted 16 prospects in the seventh round from 2005 until 2016. Only two – Olofsson and defenseman Brady Austin, who played five games in 2016-17 – have cracked the big leagues.

So when Olofsson, 25, signed his second NHL contract Thursday – his 20-goal rookie season earned him a two-year, $6.1 million deal – he felt a strong sense of satisfaction.

“It’s kind of what I’ve been working for all my life,” Olofsson said of his new contract on a Zoom call Friday. “It’s a great feeling, for sure. First of all, it’s a really good contract and it’s kind of life-changing for me. But at the same time, I know I can do even better.”

Olofsson understands he’s a neophyte. Sure, he has already scored 22 goals and 46 points and been named to the NHL All-Rookie Team. Still, he has only played 60 games.

That’s why the Swede said the length of his deal “was very important.”

“I felt like two years is the perfect deal for me right now,” said Olofsson, whose first contract had a $925,000 average annual value. “Even though I feel very comfortable and confident playing in the NHL, I haven’t had a full season yet. I want to show myself and prove to everybody I’m a really good player in the NHL.

“I feel like two years was a good time to get relaxed and I know what’s going to happen the next two years. I don’t really have that pressure of playing for a new contract right away. It feels really good.”

Olofsson’s lethal shot helped establish him as a dynamic power-play threat. He scored his first seven goals on the man advantage, an NHL record. He also showcased strong chemistry playing left wing beside captain Jack Eichel, one of the NHL’s top centers.

But the Sabres’ recent high-profile acquisitions – they signed winger Taylor Hall after trading for center Eric Staal – could reshuffle the top lines.

Hall, the Hart Trophy winner in 2017-18, will likely start the season as Eichel’s left winger. Olofsson could move to Eichel’s right side or another combination.

Sam Reinhart has regularly played right wing beside Eichel for five seasons. But keeping the Eichel-Olofsson duo intact could be intriguing for Sabres coach Ralph Krueger.

“It’s always interesting,” Olofsson said of the potential lines. “You kind of just imagine the lines and kind of see where you fit in. … You never know until you put the lines together.

“But I feel like however we do it, I feel like our top two lines are going to be really good and I feel like we’re probably gonna get even more secondary scoring this year.”

He added: “We have a little bit of a wider group now. We have more guys that can put up some points, and I feel like we’re going to be a better team, for sure, this year. It feels a little bit bigger, a little bit heavier with (Hall and Staal).”

Shifting to right wing would be no problem for Olofsson, a left-handed shot.

“I’m very comfortable (there) because I play there a lot on the power play,” he said. “I feel like I’m more of a threat on the right wing. It could be a little bit tougher sometimes in the defensive end, but I feel very comfortable playing off my backhand. I really like playing right wing.”

Olofsson has already proven to be malleable. Embracing the defensive side of the game helped buoy his terrific rookie campaign. He wants to build on that whenever next season starts.

“I’m looking to become an even better two-way player,” he said. “I feel like I did become a lot better last year in the defensive part of my game and I feel like that’s something I can take pride in and do even better here.”

Olofsson, of course, thinks he can produce more offense, especially five-on-five. He has spent the long offseason conditioning himself to handle his ice time. He said he had never played more than last season, when he averaged just over 18 minutes an outing.

“I felt like sometimes I got a little bit tired playing up to almost 20 minutes and even over 20 minutes sometimes,” he said. “So I’ve been working very hard with my endurance and still trying to become even quicker and faster out there.”