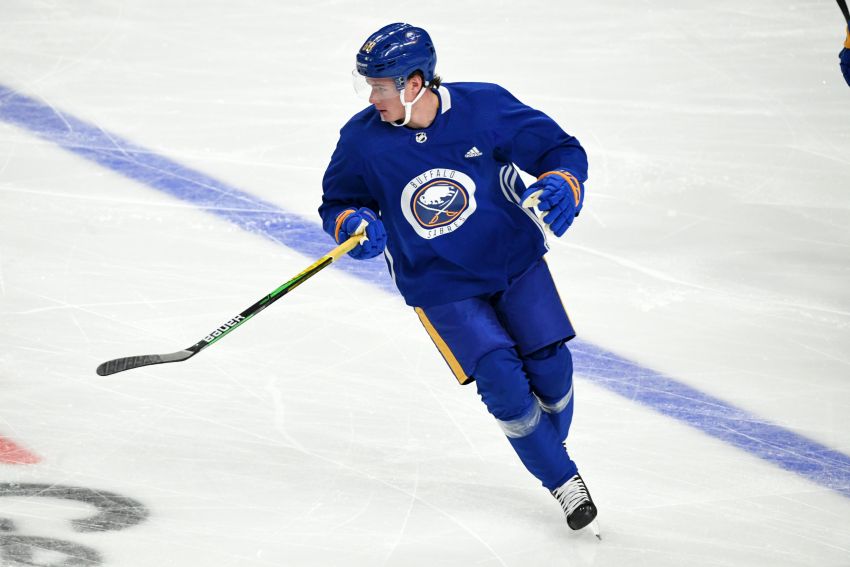 Buffalo Sabres winger Victor Olofsson suffered an upper-body injury when he crashed into the goalpost Saturday and is day-to-day, the team announced Sunday.

Tage Thompson practiced in Olofsson’s spot Sunday at right wing on the No. 1 line, according to reports from KeyBank Center.

Olofsson briefly left the ice favoring his right arm and wrist before returning to practice, according to The Buffalo News’ Mike Harrington. But Olofsson departed for good when the Sabres took a break to watch video.

Losing Olofsson to injury for an extended period of time would be significant. The Swede scored 20 goals and 42 points in 54 games as a rookie last season.

The Sabres are also missing captain Jack Eichel (upper body) and goalie Linus Ullmark (quarantining because of an immigration issue). Neither has practiced yet. Eichel and Ullmark are both day-to-day, according to Sabres coach Ralph Krueger.

Krueger said he expects “everybody back” by Wednesday. The Sabres have a scrimmage today and a day off Tuesday.

Peterka, the 34th overall pick in October, recorded four goals and 10 points in five games. As of Sunday afternoon, his point total was tied for third at the tournament with teammate Tim Stutzle, an Ottawa Senators prospect.

Krueger said the Sabres feel returning to Munich, where Peterka played last season, and competing against men is the best path for him right now.

“We just feel at the moment for him to finish the season and we will discuss that with you in the next weeks, his availability to us when their season ends,” Krueger said. “Their seasons will be ending quite a bit earlier than ours will, depending on how long they are in the playoffs, and my understanding is we will be able to access players like J-J after that.”

Peterka, 18, began the season with EC Red Bull Salzburg in the Austrian League, compiling seven goals and 16 points in 12 games.

Sabres forward prospect Aaron Huglen, the 102nd overall pick in 2019, scored a goal Saturday in his first game since the 2018-19 season.

Huglen, 19, has been battling a back injury for nearly two years. The American is starting his second season with the junior United States Hockey League’s Fargo Force.