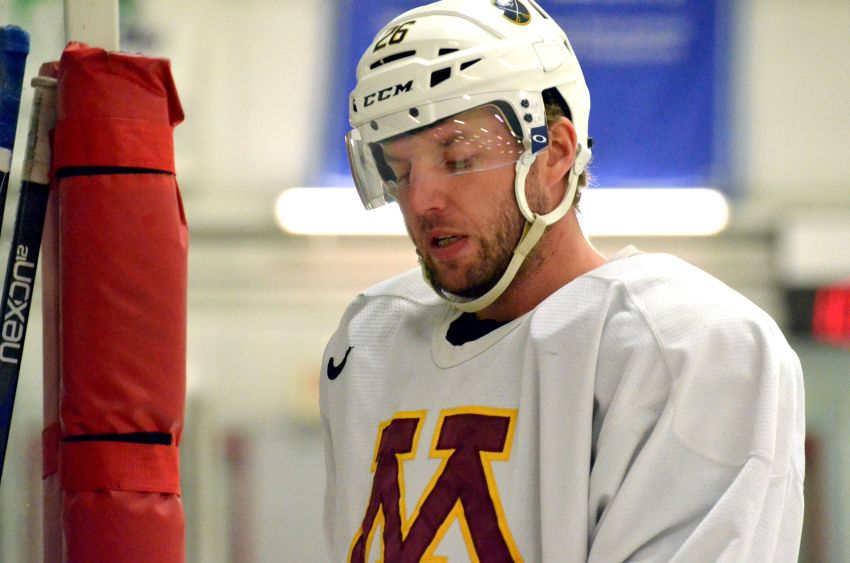 AMHERST – Right now, Thomas Vanek’s a bit torn. Like the other Sabres, the winger simply wants to play NHL games. But Vanek might have the most intriguing option of any locked-out player.

Vanek can return home to play in his native Austria, where he’s a national hero. The 28-year-old has never played professionally at home. He left for North America 14 years ago.

His arrival would be a huge deal.

“It would be a change. It would be definitely fun,” Vanek said Thursday inside the Northtown Center after skating with about eight other Sabres. “But again, I would love to play here in Buffalo. I’m here with my family. We’re settled. That would be more exciting to me.”

For some perspective on Vanek’s iconic status, consider when he scores a goal for the Sabres, it’s shown on Austrian national TV the next day, said Chris Schleifer, the online sports editor of Osterreich, a large Austrian newspaper.

He once earned the country’s top athlete honors with a skier. The mere question about his availability for the national team overshadows the rest of the roster.

Austria has two other NHL players – the New York Islanders’ Michael Grabner and Carolina’s Andreas Nodl – but Vanek is by far the most popular.

Vanek could leave for Austria immediately and pick his team. His agent has been exploring options. It’s a complicated decision, however.

Vanek’s unsure when he’ll decide. Austria would be the only place he’d play.

“If I lived by myself, just the wife and I, I would’ve been there two weeks ago,” he said.

Just the prospect of Vanek joining the Erste Bank Eishockey Liga (EBEL) has fans drooling, according to Schleifer.

“Fans … are petitioning on various Internet forums for Thomas to come to their town,” he said. “Thomas playing in Austria would give the league and the sport as a whole a big boost.”

“Thomas playing in Austria would also mean sold-out arenas wherever he would play,” Schleifer said. “The majority of Austria’s hockey fans have never seen Thomas play live. This would be their first and biggest chance.”

Meanwhile, the media, Schleifer believes, is writing more about the NHL now than it would during a regular season.

Schleifer said three teams have a realistic chance to sign Vanek: the Vienna Capitals, who have a good club, a large new arena and a respected coach; Red Bull Salzburg, an annual contender with money and former NHL coach Pierre Page; the Graz 99ers, who have a weak team, the least money and an old building but play where Vanek spent some of his childhood.

“I think teams over there are respectful,” Vanek said. “I told them I don’t want to give them any false hope because I want to be 100 percent sure I want to be there, not just go as a joke and as a parade or something. If I go, I want to be committed.”

Vanek’s parents and reporters have told him Austria’s amped for his possible arrival, something that flatters him.

“I don’t know what to expect,” Vanek said. “I know my name, the stature of myself has grown over there. … I’m not a person that’s looking for (attention).”

Vanek’s looking for better workouts. With players scattering and AHL camp opening, practicing has become difficult with less than 10 bodies.

More are bolting, too. Defenseman Andrej Sekera signed Tuesday with HC Slovan Bratislava, a KHL team. Defenseman Tyler Myers is heading home to British Columbia. The NHL canceled the rest of the preseason Thursday. Tilts on Tuesday at Columbus, Friday at Boston and Oct. 6 at home against Columbus are gone.

Regular-season games will be next.

The league and players have three days of talks scheduled beginning today, however.

“The reality is we’re far apart,” Vanek said before an additional two days of talks were added. “Can we get closer in a hurry? Sure. Can it stay the same for a long time? Yeah. I’m not one of those guys that says, ‘Thanksgiving, Christmas, this or that.’ It’s false hope. You take it a day at a time.”