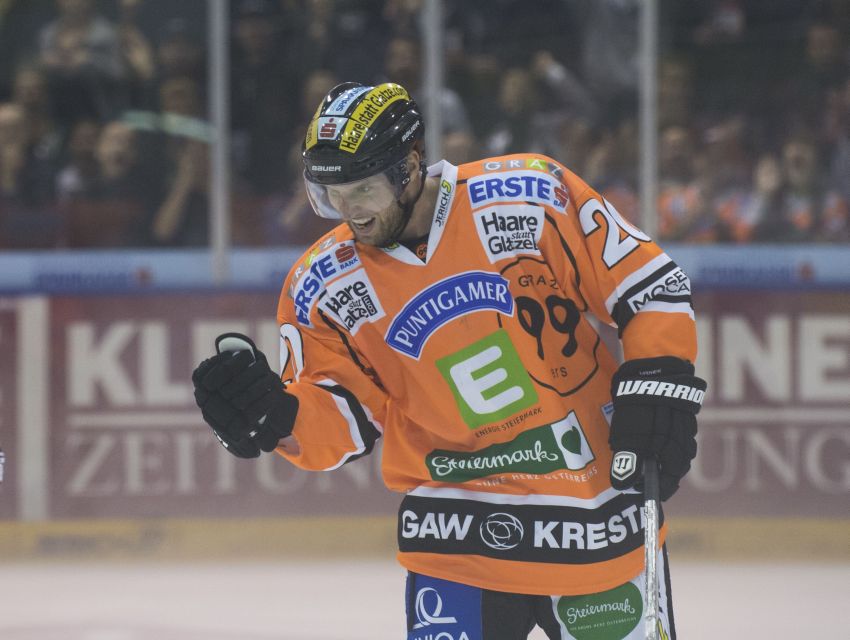 AMHERST – Having grown up in Austria, Thomas Vanek knew a lot about European hockey. Then the locked-out Buffalo Sabres winger, who left for the United States 14 years ago, signed a short contract with his hometown Graz 99ers, a team in the Erste Bank Eishockey Liga.

“Playing it and seeing it is definitely an experience,” Vanek said Wednesday after skating inside the Northtown Center.

Fans in the antiquated and small buildings throughout the EBEL sing, scream and even bang on drums the entire game. Like most European teams, Vanek’s 99ers sport gaudy, advertising-laden uniforms. Austrian officiating isn’t up to North American standards, either.

It all made for unique, once-in-a-lifetime adventure.

“It was a good experience,” Vanek said, “but I’m happy to be back.”

Vanek, a national sports icon, spent much of his time at home promoting hockey through various media appearances. With about 10 NHL players on EBEL rosters, Austrian hockey’s enjoying a brief golden age, even if the new talent’s taking away spots from homegrown players.

“I knew it was going to be a big deal, but not as big (as it was),” Vanek said about playing professionally at home for the first time. “So I was surprised about that in a positive way. I think hockey boomed in the last five weeks. Every rink was packed. Newspapers were full, and people were talking about hockey, which is the most exciting part of it. Hopefully, things like that (continue) for the future.”

The 28-year-old can go back to the 99ers, although he’s unsure if he will. He had to leave his wife and three young children back in Buffalo. He doesn’t want to take a spot roster spot from another player, either.

“It’s always an option,” Vanek said about returning. “I mean, I had a good time there hockey-wise. Obviously, I missed my family a lot. But as far as the game went, it was great. You have organized skates. You compete in a league. That’s what you want as a hockey player.”

In addition, collective bargaining agreement negotiations finally appear to be gaining some traction 54 days into the lockout. The NHL and the Players’ Association met for a second straight day Wednesday at an undisclosed location in New York.

“I don’t think you read into it too much,” Vanek said. “I think the good thing is we’re talking. But until there’s a deal done, there’s no signs really for optimism.”

Back in Austria, Vanek showcased some signs of dominance one might expect from an NHL star joining a lower-level league, finishing with five goals and 15 points.

Getting in game shape wasn’t easy, however. The 99ers started training camp in August and had been playing games when Vanek joined them in early October. Meanwhile, he had only been skating informally with other locked-out players.

“You come over there, you hadn’t really played at all,” Vanek said. “You practice, you skate, but it’s not the same. So it was hard. It took me two weeks for sure to get up to speed and kind of get that summer hockey out of me. Each week was better. Each practice was better. Each game got better.”

Friday’s game, a 6-3 win against Sabres teammate Tyler Myers, who plays for Klagerfurter AC, might’ve been the most interesting. Competing against the 6-foot-8 defenseman was a bit different.

“Obviously, it’s weird looking at him over there and all the guys asking me, ‘Is he really that tall? Is he really that good?’” Vanek said. “‘Yup, he’s all of the above.’ Once the game starts you just kind of forget about it. But obviously it was nice catching up with him on the phone, seeing a familiar face from there. That was unique.”

Sabres defenseman Jordan Leopold on the role new media is playing in the 2012 lockout: “The scrutiny is definitely there. It’s definitely changed over the years since we went through this (in 2004-05). I mean, Twitter, Facebook, the world of information, everybody needs it now. It includes our guys. I mean, they read something online, and they want to know now. Nobody has patience anymore.”

Notes: Rochester Americans center Cody Hodgson, who has nine assists and 10 points in nine games, has a broken bone in his right hand and will miss “a couple weeks,” Americans coach Ron Rolston told the Rochester Democrat and Chronicle. Hodgson is only playing in the AHL because of lockout. … Vanek on the flashy European uniforms: “It’s part of Europe. It’s always been like that. I knew that growing up. It’s good. Why not? If you can promote the game and get more sponsors, I think it’s unique. I know my son loves it.” … Former Sabres forward Adam Mair recently joined Canisius College as the hockey program’s volunteer director of player development.