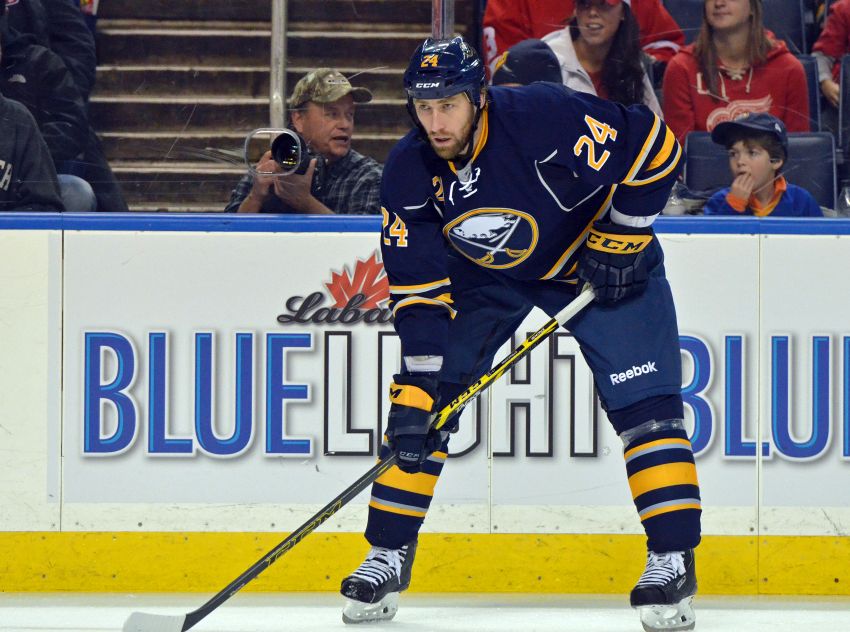 BUFFALO – Watching nine of the first 10 games as a healthy scratch, waiting 16 days in between appearances, well, that’s nothing new for Sabres defenseman Tyson Strachan.

Welcome to the life of an NHL journeyman.

Strachan, a 30-year-old veteran of 142 games, said he once sat about two and a half months with St. Louis early in his career.

“It’s tough,” said Strachan, who had two assists in Sunday’s 3-2 shootout win against the Detroit Red Wings inside the First Niagara Center. “It’s always tough to sit out, obviously. But it was a learning experience like anything else. Everybody has to learn how to be a pro.”

Incredibly, Strachan has three points this season, more than the other seven defensemen combined.

They signed Strachan to provide veteran depth, a role he embraces. Years ago, he developed strong habits to stay sharp so rust never develops.

His old Blues coaches, Andy Murray and Brad Shaw, demanded he do it.

“They demanded the best every day,” Strachan said. “For a guy that was out of the lineup, if they were going to trust me to come into the lineup, they needed to see I was on top of my game every single day. It was a mentality that I learned about and perfected early on, that I needed to come and treat every day like it was game day, show them my best and get better.”

When Strachan signed a one-year, two-way deal with the Sabres on July 2, many figured he would start the season in Rochester and occasionally be recalled.

The Saskatchewan native played 18 games with Washington last season and 60 in AHL Hershey. He hasn’t spent a full year in the since leaving Ohio State University in 2007, although he stayed with Florida all season after the 2012-13 lockout ended.

Strachan impressed during training camp, earning a spot as the seventh defenseman. He sat the first three games, registered assist in his season debut, a 3-2 shootout win Oct. 14 in Carolina, and then sat the next six contests. He returned Thursday.

“I think that’s what being a true pro is all about, being ready when called upon and doing what is required,” Sabres coach Ted Nolan said. “One thing about Tyson, I know it was tough for him to sit out all those games. But you wait. We wait for someone’s misfortune to make it your fortune.”

It takes a special personality to play Strachan’s role.

“I’m probably as relaxed as anybody you’ll find,” he said. “That’s probably helped me through the years, because you learn pretty early on that you can only control certain things.”

Nolan added: “I think he’s comfortable in his own skin. He knows who he is, what he is and he tries not to be something that he’s not. He plays very efficiently, he moves the puck and he plays defense.”

But Strachan’s still in flux. If the Sabres to keep 19-year-old defenseman Nikita Zadorov, his partner Sunday, or recall Mark Pysyk, a youngster many thought would be an NHL regular this season, Strachan could be sent down.

“I’ve had eight years of hotel life,” Strachan said. “It’s pretty much year-to-year been like that.”

As expected, the reeling Sabres changed their lineup Sunday.

Slick winger Johan Larsson was recalled from Rochester to replace Marcus Foligno, who got “banged up” in Saturday’s 5-0 loss in Pittsburgh, Nolan said.

In addition, Zadorov, a healthy scratch 11 times this season, and Andrej Meszaros, a scratch the last two games, returned. Andre Benoit and Mike Weber, who spoke passionately about the Sabres’ sorry state Saturday night, were scratched.

“I really liked him,” Nolan said. “He’s one of those kids that brings enjoyment to the game. Power play, he looked down at me, he wanted to get out on the power play. Last minute of play, he wants to get out there. This kid has no panic in his game.”

Larsson, meanwhile, has three goals and eight points in nine games with the Americans. A preseason concussion ended his chances of making the Sabres out of camp.