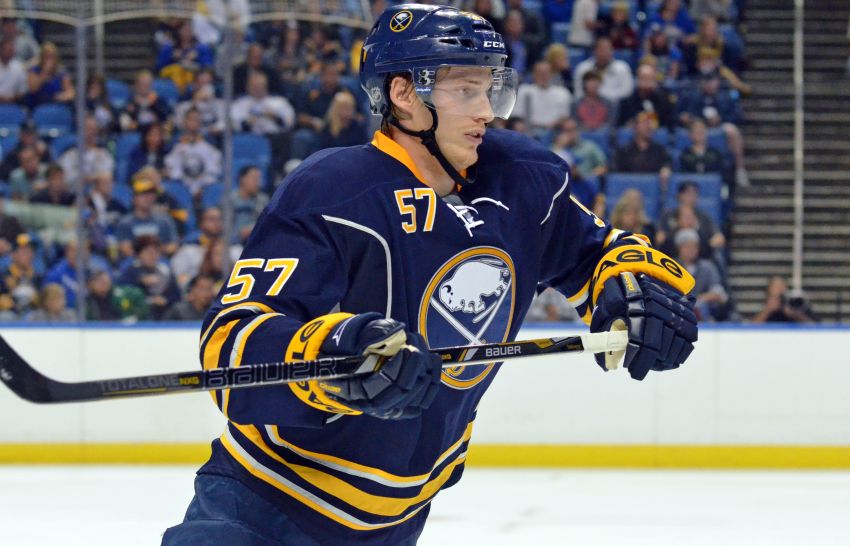 Back then, Tallinder was struggling to regain his confidence, a shell of his old, smooth self. Myers was a slick 19-year-old rookie beginning a Calder Trophy campaign.

The two clicked immediately. Tallinder morphed into a calm, cool veteran again, complimenting Myers perfectly – on and off the ice.

“What he did for me my first year coming into the league … not many guys get that,” Myers said Thursday inside the First Niagara Center after the Sabres prepared for tonight’s home opener against the Ottawa Senators. “It was a huge contribution to the success I had that year and the success he had that year.”

But their careers went separate ways.

The Sabres passed on re-signing Tallinder, so the likable Swede inked a four-year deal with New Jersey. Myers, meanwhile, has suffered a stunning regression.

Since reacquiring Tallinder in July, the Sabres have insisted the 34-year-old’s not back to jumpstart Myers, who started training camp playing beside other defensemen.

“I’m here to play for the Sabres, not just Mysie,” Tallinder said Thursday. “Whatever happens, if I play with him, great. I think we have good chemistry together.”

Myers added: “You guys make it out to be like we’re gods together.”

Gods or not, Sabres coach Ron Rolston, as many expected, reunited the duo recently. They played together during Wednesday’s season-opening 2-1 loss in Detroit, their first meaningful appearance since April 26, 2010.

“I think we’re picking up pretty close to where we left off,” Myers said. “It’s just a matter of we keep building.”

“When he is forcing things is when he gets in trouble,” Rolston said. “When he lets the game come to him and plays off the game, he’s outstanding. And he’s still learning the maturity of doing that.”

Tallinder’s presence might help Myers recapture the form that once made him arguably the NHL’s best young defenseman. But Myers began picking up the pieces from his wretched, career-worst season months ago, long before Tallinder’s return.

Myers’ trying 2012-13 – the first season of a seven-year, $38.5 million contract – is well known in these parts. Despite playing in Austria during the NHL lockout, he reported to January’s abbreviated training camp woefully out of shape.

The 23-year-old never recovered, struggling from the get-go. Lindy Ruff scratched him twice in February, shortly before the Sabres fired the longtime coach.

Myers improved a bit under Rolston – “I felt like I was getting back to where I needed to be at the end of last year,” he said – although he showcased little aggressiveness or offense.

He finished with three goals, eight points and a minus-8 rating in 39 games before suffering a season-ending hairline fracture in his left leg blocking a shot April 11.

“You have a year like you had last year you want to change some things,” Myers said recently. “I’ll be the first to say that’s not me as a player last year. I have to be much better.”

Mental woes have plagued Myers over the years. Trying to replicate his Calder season overwhelmed him. So has living up to that huge contract.

“That’s the hardest thing,” Tallinder said about dealing with struggles. “When you get older, you kind of let it off a little bit. But when you’re young, you take it straight to heart basically. So I think that’s what he did. It gets into his head, too. He’s fine.”

So, in addition to training with an increased vigor, Myers spent what he called his best offseason also working with a sports physiologist.

The mental aspect was new to him.

“That was, I feel like, the biggest difference for me this summer,” he said. “It’s just a matter of trying to continue that training throughout the season and so on. But it’s a process. … It’s tough to break (23 years of) habits.”

For Myers, last season is history.