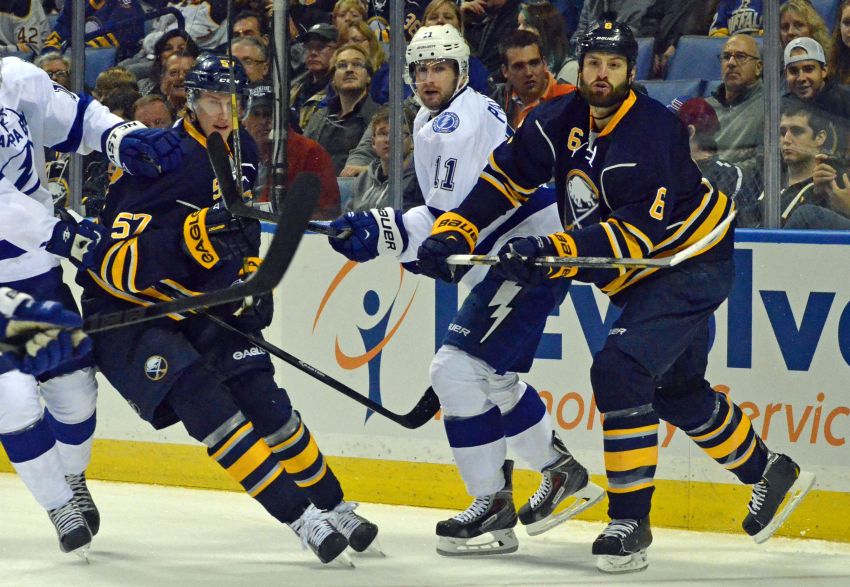 Myers has spent significant time beside almost every established defenseman in recent seasons, a result of personal and team struggles. Weber, meanwhile, has only established himself as a regular presence in the last year.

Still, the two had never been paired together for more than a few shifts before Tuesday’s 3-2 overtime loss to the Tampa Bay Lightning inside the First Niagara Center.

“It’s a big honor to be able to play with him,” Weber said about Myers, the 2009-10 Calder Trophy winner, prior to the game.

You hear that, Tyler?

“Unnecessary, for sure,” Myers said about the compliment. “But I feel the same way.”

Rolston said the Sabres want more stable pairs, “especially against some of the higher-end forwards in the league.” So Myers and Weber finally skated together.

“The way he’s developed as a player it’s pretty unbelievable to see,” Myers said about the gritty Weber. “He’s carried it in the first three games here. I’m very excited to be partnered with him.”

Weber added: “It’s exciting for me to play with him tonight. Just try to make his night a little easier, just get him the puck and let him do his thing.”

Weber fought Ryan Malone in the second period, one of three scraps between the new Atlantic Division rivals. Myers was caught running around on Alex Killorn’s overtime winner.

In other lineup news, Marcus Foligno (muscle strain) made his season debut. Rolston put the winger back on the left side beside Tyler Ennis and Drew Stafford, reforming a trio that electrified late in 2011-12.

“We’re trying to find some combinations where we have some sandpaper on lines,” Rolston said Tuesday morning.