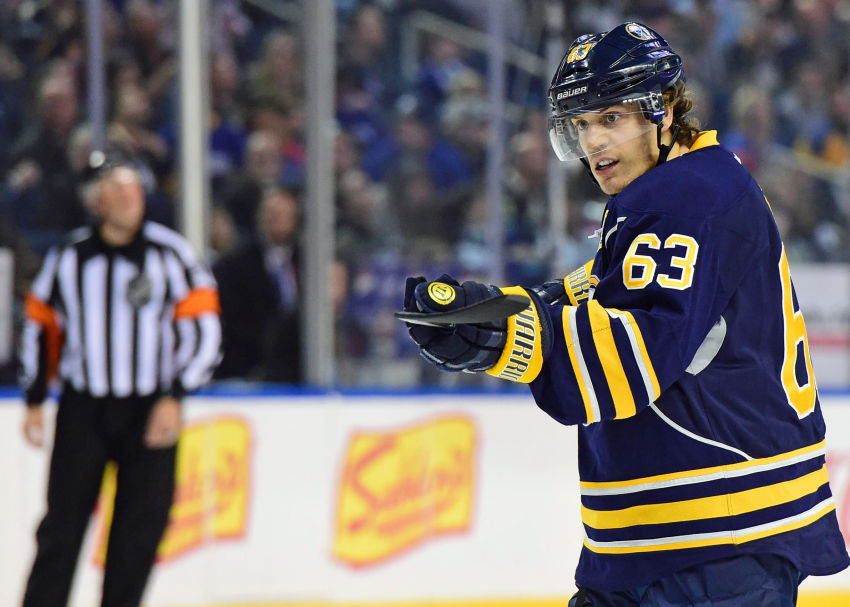 BUFFALO – When Dan Bylsma and Tyler Ennis discuss the speedy Sabres winger’s play, the coach rarely has to give the young veteran his opinion.

That’s because Ennis, who can often be critical of his own game, usually beats Bylsma to the punch.

“He tells me the same thing he’s told you,” Bylsma said Monday following practice inside the First Niagara Center. “I know (he’s) probably been a little hard on himself a handful of times.”

On the surface, Ennis, 26, has enjoyed a decent start this season. With three goals and seven points in his first 12 outings, he’s on a 20-goal, 47-point pace entering tonight’s road game against the Tampa Bay Lightning – almost his exact numbers from 2014-15.

Ennis’ dynamic game-winning assist in which he said he “shimmy-shaked a couple of guys” late in Saturday’s 3-2 win – he intercepted a pass in his own zone and beat four defenders into Vancouver territory – showcased slick skills “very few” NHL players possess, Bylsma said.

“I don’t know the group of players that I would put into the very few,” Bylsma said, “but very few.”

Still, Ennis, who’s averaging a tick under 20 minutes on the ice each game, knows he can better. He’s a minus-6 this season. And one shift, he believes, shouldn’t cancel out the rest of the game.

“I think the last play was a good play, but I can still play a better 60 minutes,” he said.

With so much new talent surrounding him, this was supposed to be a breakout campaign for the 2008 first-round pick.

“I know he needs to, wants to play better than he is right now,” Bylsma said. “I do know he came up big for us in the dying seconds of that game on a big play to help us get a win.”

Ennis spent most of this season playing with center Ryan O’Reilly before moving beside Zemgus Girgensons, his pivot most of last year, on Saturday. Bylsma switched Ennis again Monday, this time beside rookie center Jack Eichel and Jamie McGinn.

Pairing Eichel and Ennis, arguably the team’s two best puck-movers, might seem like a no-brainer. The two dazzled in one of their lone appearances together, a Sept. 26 preseason win in Ottawa. Ennis had three goals and four points and Eichel had two assists.

But both might want the puck, and there’s only one on the ice.

“I’d like to see that creativity together,” Bylsma said. “I know Jack likes to have the puck, Tyler likes to have the puck. If Jack has the puck in the last minute of the last game, maybe we don’t see Tyler dance up the ice with it. So there’s been a concern there’s only one puck for the two of them. I think two skilled players having the chance to play together and create off each other is what we’re hoping for.”

This isn’t Ennis’ first “slow” start. Why does he occasionally stumble out of the gate? He thinks it takes him “a while to get used to the pace or something.”

“I think that’s why I’m maybe rushing things,” Ennis said. “I’m rushing them too much and rushing them when I have some chances, rather than just taking that extra second and making a good play.”

Two years ago at this time, Ennis looked lost in former coach Ron Rolston’s system. When Ted Nolan took over, he started using his natural instincts and playing less robotically.

Bylsma utilizes systems and structure much more than Nolan. Could that be a problem?

“No, I think it’s great,” Ennis said. “Any coach will allow guys to do what makes them themselves, just it has to be within a structure. I think we got a great structure. There’s been no limitations in my end. I just have to perform better.”

The Sabres need to perform better against the Lightning. They’ve lost seven straight to their Atlantic Division rival, including all three this season. Tonight is already the final meeting of 2015-16 between the teams.

“We owe ‘em one, for sure,” Ennis said. “We’ve been saying that for a long time. Last time we were there (Oct. 17) we played well. We just didn’t get the win. It seems like we play them every game now, so we know their systems, they know ours. It’s just going to come down to who wants it more.”

Fourteen games into the season, Sabres defenseman Zach Bogosian, who suffered a lower-body injury early in training camp, is still sidelined. There is, however, some good news.

Meanwhile, forward Cody McCormick, out since he developed blood clots in January, still hasn’t been cleared to play, Bylsma said.

Bylsma said he remembers the “skating legs and the young face” of Sabres defense great Phil Housley, who was inducted to the Hockey Hall of Fame on Monday.

“He’s for me like Paul Coffey,” he said. “(I) feared playing against this guy because you could not catch him, and he was that virtually every night he played. You couldn’t catch this guy even if you tried.”